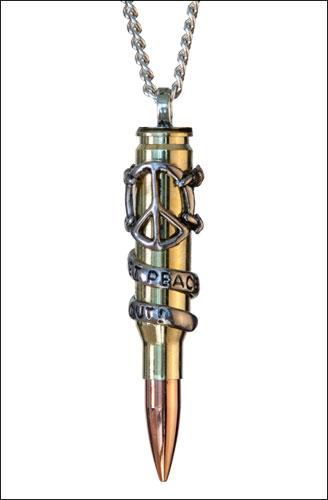 Bullets are generally symbols of chaos and destruction, but Rafi Anteby transforms war bullets into beautiful and unique designer handmade jewellery as a way of spreading consciousness of peace. Not only promote those beautiful pendants a strong message, Bullets4Peace is also donating a portion of the sales towards several charities through their program “Every Bullet has a target”. Bullets4Peace is made of recycled bullet casings taken from reload centres, streets and war zones. When a bullet is fired the tip flies towards the target and the casing falls to the ground. Manufacturers reload these casings with live ammunition Bullets4Peace intercepts this vicious cycle by transforming the casings into unique and stylish fashion jewellery pendants insuring that these bullets will never find their way back to war zones, thus promoting harmony and peace. Each handmade necklace recycles a real bullet casing decorated with pewter and silver casts. Some of the jewellery pieces include crystals or even LED lights. Peace signs, dolphins, microphones and crosses are among the nearly 100 different pendants. Celebrities like Beyoncé, Sofia Milos (CSI Miami), Bruno Mars, Max Adler (Glee) and Jamie Foxx are supporting Bullets4Peace with their pendants. Wisin & Yandal (Latin Musicians) featuring Bullets4Peace in their new music video “Tu Olor” and SkyBlu from LMFAO is wearing his Microphone pendant from Bullets4Peace in their music video “Party Rock Anthem” (Every day I’m shufflin’). Bullets4Peace – Reloading Life!The Bullets4Peace jewellery began when designer Rafi Anteby's close childhood friend was killed in a hail of gunfire. To intercept the vicious cycle of death. Rafi created something that would ultimately help to limit the damage an individual bullet could do. By transforming a bullet casing into an artistic piece of jewelry i.e. a symbol for peace, this helps to ensure that one bullet casing cannot be refueled to kill again. Now Rafi aligns himself with as many people as possible who stand for peace in every capacity, from intercepting bullet casing in war zones, streets, and other places to promoting inner peace and harmony through the ways of the Taoist, which is the embracing of nature in every aspect. They wear these beautifully crafted pieces of art and stand in unity to bring an end to senseless violence and the deaths of so many. With his friends in Hollywood, Rafi is quickly becoming known for his efforts to thwart violence around the world through his company whose sole mission is to help eradicate violence one bullet at a time.Bullets4Peace Ireland Diana Hughes Frankford Enniscrone Co. Sligo IrelandMobile: 0862188077 email: info@bullets4peace.ie web: http://www.bullets4peace.ie

09-01-2011 | Fashion, Lifestyle, Trends
Bullets4Peace Ireland
“Every Bullet has a target” – Bullets4Peace Ireland supports Irish Autism …
Co. Sligo, 30th August 2011 When a bullet is fired the tip flies towards the target and the casing falls to the ground. Manufacturers reload these casings with live ammunition. Bullets4Peace intercepts this vicious cycle by transforming the casings into unique and stylish fashion jewellery pendants ensuring that these bullets will never find their way back to war zones, thus promoting harmony and peace. “Every Bullet has a target” is an

12-14-2017 | Leisure, Entertainment, Miscel …
Film Festivals Alliance
Natasha Dematra Received Hero of Peace Prize
Natasha Dematra, the youngest female director in the world, received Hero of Peace Prize Award from the Royal Palace of Blahbatuh in Bali. Kuta, Bali, Indonesia -- Natasha Dematra, the youngest female director in the world, received Hero of Peace Prize Award from the Royal Palace of Blahbatuh in Bali. The prestigious award was given because of her contribution to peace and humanity. Natasha said that she felt honored to receive
09-22-2011 | Science & Education
JMA Pilani Rajasthan
World Peace Day at JMA Pilani Rajasthan
Located in the heart of Shekhawati region of Rajasthan, Pilani is well known in India today for various top ranking educational institutions, CSIR Laboratory CEERI as well as the upcoming BrahMos Missile Assembly Project unit. Jamuna Mishra Academy – JMA established in the year 2004 which has been making rapid strides in early childhood education is presently one among the top ranking and most sought after schools at Pilani Rajasthan.
11-18-2010 | Associations & Organizations
Rotary International
Rotary Peace Fellow Leads Peace Caravan Through West Africa to Promote Peace, Un …
Led by Rotary Peace Fellow Richelieu Allison, a peace caravan on November 10 began its journey through four countries in West Africa to promote cross-border dialogue and grassroots peace building. The Rotary West African peace caravan, which consists of two large buses with 40 participants, is traveling to border towns in Sierra Leone, Liberia, Guinea and Ivory Coast to help resolve deep rooted disputes and increase the involvement of local
06-18-2010 | Business, Economy, Finances, B …
Presseabteilung Taipeh Vertretung
Taiwan’s sovereign rating and peace index rise
Standard & Poor’s Ratings Services (S&P) on June 11 boosted Taiwan’s sovereign rating outlook from “negative” to “stable.” KimEng Tan of S&P stated that this adjustment to Taiwan’s sovereignty rating primarily reflects the recovery of growth momentum for Taiwan’s economy. Continued economic recovery will allow Taiwan’s economic growth rate to return to nearly 4 percent and help improve the fiscal problems of Taiwan’s government over the next three to five
03-04-2008 | Media & Telecommunications
SPH Magazines Pte Ltd
THE SEVENTEEN BODY PEACE TREATY
Singapore, 20 February 2008 – Seventeen Singapore, a publication of SPH Magazines Pte Ltd (\"SPH Magazines\"), presents The Seventeen Body Peace Treaty as part of its Seventeen Body Peace Project. Seventeen declares Peace! Most girls are at war with their bodies, berating themselves when they do not meet their imaginary standard of beauty and perfection. “We sometimes blame our bodies for the bad day we’re having; we give up cookies, bread
09-11-2007 | IT, New Media & Software
911 Nine eleven peace blogs
911: peace blogs marathon started today. Remember September 11th victims and blo …
PEACE BLOGS - September 11th as a day to remember 911 victims. Also, as a day to start on www.mypacis.com a blogging marathon which will continue until September 21st, voted International Day of Peace by the United Nations. This synchronized blogging, also known as blog carnival, has been already featured by peers and media, mainly in USA, UK and Italy. Podcasting forums also reviewed it, inviting podcasters to speak about peace
Comments about openPR
OpenPR is clearly structured and remains true to its principle of confining itself to the essential parts. OpenPR has proven to be a very good and reliable partner to our media agency: Within the shortest time the releases are online and go down well with the media representatives. The success of OpenPR is reflected in the steadily increasing number of press releases. It is good that OpenPR exists!
Ursula Koslik, Director Marketing & PR, F+W Hamburg