Blickachsen 12 – Art far beyond the borders of Bad Homburg 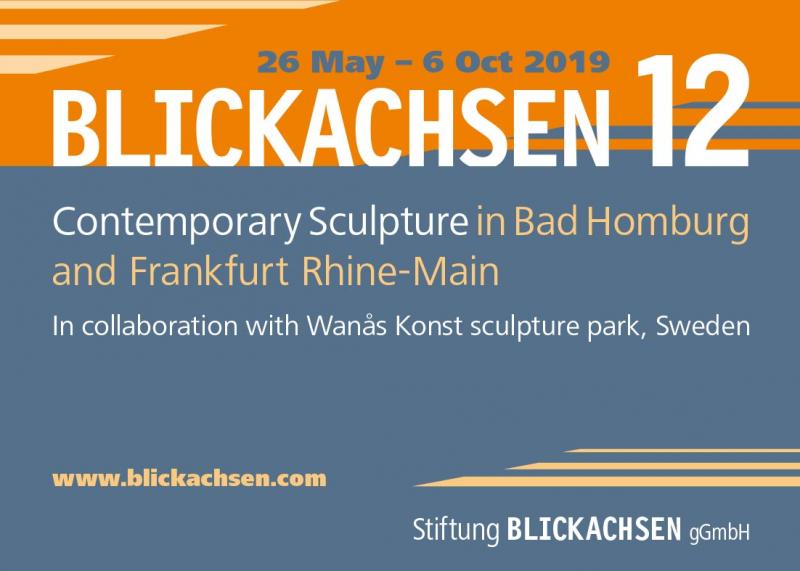 With its many works by international artists and an exciting supporting programme Blickachsen 12 attracts droves of visitors to Bad Homburg and the Rhine-Main region, Germany.Just half-way through and already this is clear: this year’s Blickachsen 12 edition of the biennial open-air exhibition is more popular than ever – hundreds of thousands of visitors have already experienced the contemporary sculptures and installations on display in their dialogue with the public space and historic parks of Bad Homburg and the region. At the heart of the exhibition have always been the Kurpark and Schlosspark in Bad Homburg. But this year once again Blickachsen reaches out far beyond the borders of the city, to five further locations in the Rhine-Main area: from Bad Vilbel and Eschborn to Frankfurt and Kronberg, and finally to Eberbach Monastery, almost sixty kilometres away. In the freely accessible outside spaces of this former Cistercian monastery, nine bronze figures by Hanneke Beaumont are on display: poised, kneeling or sitting, they invite the observer to pause and to reflect.The altogether 60 artworks by 31 international artists in Bad Homburg and the Rhine-Main region can still be seen until 6 October. And the coming month promises once again to be just as exciting for the participants of the exhibition: in September the Friends of Blickachsen will be awarding their art prize of 5,000 Euros in recognition of one of the works. The last winner of this prize, in Blickachsen 11, was the German artist Alicja Kwade (b. 1979) – who is now considered to be one of the foremost sculptors of her generation.For those who do not wish to experience Blickachsen 12 on their own or with the help of just the brochure and the QR codes on the plaques by the works, there is still the opportunity in the coming weeks to join one of the wide-ranging tour and informational programmes on offer. In addition to the regular general tours in German in Bad Homburg (in the Kurpark, on Thursdays at 6.30pm and on Sundays and holidays at 11am, as well as in the Schlosspark on Sundays, except 1 Sept., and holidays at 3pm), individual group tours can be booked for all locations (in German, English, French or Italian) at the Blickachsen Foundation, at fuehrungen@blickachsen.de (or by telephone on +49 - (0)61 72 - 681 19 46). Furthermore, a special themed tour “Dreams, Trees and Sculpture. Spatial concepts in contemporary art” will be held every Tuesday at 6pm in the Kurpark. Additionally, there are still two opportunities to join the “INTERaction. Sculpture and me” tours on the interplay between art and the observer: on Saturday, 17 August at 3pm in the Schlosspark and Saturday, 21 September also at 3pm in the Kurpark. For private children’s and youth groups as well as pre-school and school classes there is a special programme of walks and interactive tours. Blickachsen 12 artists: Hanneke Beaumont, Claudia Comte, Jacob Dahlgren, My Ekman, Elmgreen & Dragset, William Forsythe, Charlotte Gyllenhammar, Jeppe Hein, Satch Hoyt, Sofia Hultén, Leiko Ikemura, Kaarina Kaikkonen, Per Kirkeby, Ruud Kuijer, Alicja Kwade, Arik Levy, Katarina Löfström, Ohad Meromi, Nandipha Mntambo, Sirous Namazi, Yoko Ono, A.R. Penck, Leunora Salihu, Sean Scully, Anne Thulin, James Webb, Winter/Hoerbelt, Fredrik Wretman, David Zink Yi.Information for all Blickachsen 12 locations and on the educational and accompanying programmes, as well as all previous press releases on Blickachsen 12, can be found at www.blickachsen.com.Sunita Scheffel Mobile: +49 – (0)178 – 473 25 91 presse@blickachsen.deStiftung Blickachsen gGmbH (Blickachsen Foundation) Ferdinandstraße 19 61348 Bad Homburg v.d.Höhe Germany Tel.: +49 – (0) 61 72 – 681 19 46 info@stiftungblickachsen.de presse@blickachsen.de www.blickachsen.de www.blickachsen.comAbout the Blickachsen Foundation The public benefit Blickachsen Foundation, with its seat in Bad Homburg, Germany, was established in March 2013 to oversee the Blickachsen Sculpture Biennale, which it organizes together with the municipality of Bad Homburg, the Kur- und Kongreß-GmbH and the Administration of Public Stately Homes and Gardens in Hessen. The foundation’s aim is to secure the long-term future of the Biennale, and to provide access to contemporary sculpture and installation art to an ever-growing audience in the public space. At the same time, the foundation seeks to promote the evolving cultural attraction of the city of Bad Homburg and the further Rhine-Main region, and to establish the region over time as an international centre for contemporary sculpture. In offering, every two years, a platform for exhibiting the work of both young and established artists from around the world, the foundation seeks both to promote emerging artistic talent, and to heighten popular interest in and appreciation of the most varied currents in three-dimensional art. A lively encounter with contemporary sculpture is stimulated by the diverse range of Blickachsen tours and workshops for children, young people and adults. In addition, the foundation sees itself as a mediator and point of intersection between cultural and educational institutions, supporting the dialogue between artists and museums, as well as between art and scholarship.

08-29-2008 | Politics, Law & Society
ethority GmbH & Co. KG
Bad Grades for Barack Obama
ethority analyzed around 90,000 authentic user opinions found in forums, blogs and news sites concerning the two candidates running for president of the USA. German-, English- and Spanish-speaking contributions on the internet were evaluated and show that the democratic candidate Barack Obama has a greater buzz (percentage) compared to his republican competitor John McCain. However, in terms of sentiment, especially among German- and Spanish-speaking internet users, McCain and Obama are
05-29-2008 | IT, New Media & Software
ID Control BV
Password security often bad for environment
Amsterdam, 30 May 2008, ID Control BV, the specialist in advanced online identity and access management today announced her new longer lasting hardware One Time Password generating Token to fight online identity theft and fraud. With the ID Control OTP Key, a new one-time password (OTP) is issued every time a user remotely and securely wants to log into the protected remote access of networks, applications and digital resources. The user
02-27-2008 | Leisure, Entertainment, Miscel …
SkatMedia
Winner of Bad Fuessing Skat festival qualified
The days of the 11th to the 15th February was a week full of events for the participants of the 5th International Skat festival. The initiative of spa manager and mayor filled the big hall of Bad Fuessing with more than 150 activated Skat players for a competition over five days. The tournament was organized by www.skat-international.de under supervision of Hans Cordes and was one out of four possible Skat
04-26-2006 | Fashion, Lifestyle, Trends
HGTV
When bad designs happen to good people
CELEBRITY DESIGNER FRANK FONTANA RESCUES HOMEOWNERS FROM BAD TASTE ON HGTV'S TAKEOVER MY MAKEOVER New Half-Hour Series Premieres Saturday, May 6 @ 7 p.m. ET/PT LOS ANGELES, CALIF. (April 25, 2006) – When bad designs happen to good people, HGTV is there to turn things around in Takeover My Makeover, an entertaining new weekly series premiering Saturday, May 6 at 7 p.m. ET/PT. Takeover My Makeover features a rotating team of expert
12-30-2005 | Business, Economy, Finances, B …
jeepeebiz
Finding the Perfect Bad Credit Mortgage Company
If you have a bad credit score, then you need to choose the best bad credit mortgage company if you want to get a mortgage loan. Since a mortgage is a very large investment, you need to choose the best company. The most important factor to be considered is the interest rate. Thus you need to choose the bad credit mortgage company that provides you the most favorable rate of
12-12-2005 | Business, Economy, Finances, B …
Online Credit Pro
Bad Credit Loans and Sub Prime Lenders
What do you think if you home loan application is denied? The first thing you do is to retrieve is get hold of your credit report. I would suggest that you look into a tribureau credit report (which has reports from Experian, Equifax and Transunion) A tribureau credit report will have fewer discrepancies and have up to date information about your credit. Loan applications are rejected if we have
Comments about openPR
We publish our press releases on openPR.de because we like people who are "open" - just like us.
Frank Obels, CEO, INCONET - Informationssysteme, Communication und Netzwerkberatung GmbH