Maybach is sponsor of the retrospective “Permanently Becoming and the Architecture of Seeing” by Julian Schnabel. 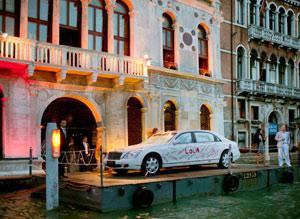 June 21th 2011 – What have in common Venice, the decadent city of the lagoon, and Maybach, the luxury cars brand of the Daimler AG group? Not much, you’d may think, since in Venice it is not possible to drive wheeled vehicles, especially of the imposing size of the giants from Sindelfingen. But the city and the luxury cars brand share similar traits d’union and, you may say, they have a common vocation for the art, besides their uniqueness, allure and their timeless, incomparable elegance.The ideal union between Maybach and Venice was highlighted by an important retrospective on Julian Schnabel, partner of the German luxury cars brand since 2010. The exhibition, staged at the Museo Correr in the central Piazza San Marco from June 4th to November 27th, has been organized thanks to the collaboration of Maybach as main sponsor.Alongside the exhibition - “Julian Schnabel. Permanently Becoming and the Architecture of seeing” - an especially realized piece of art was shown to the art lovers during the Biennale days: “The Ones You Didn't Write – The Maybach Car” is a special Maybach vehicle painted by Julian Schnabel together with his protégé Vahakn Arslanian. This collaboration falls within the context of the Wilhelm and Karl Maybach Foundation’s Mentoring Programme. The mission of the luxury cars brand non-profit foundation is to mentor young artists and talented young leaders facing adversity to bring about positive changeMaybach www.maybach-manufaktur.comThe company was originally founded in 1909 by Wilhelm Maybach with his son Karl Maybach acting as director and was known as "Luftfahrzeug-Motorenbau GmbH" based in Bissingen on the Enz. In 1912 the company moved to Friedrichshafen and changed its name to Maybach Motorenbau GmbH Friedrichshafen. Today, the marque Maybach Manufaktur is owned by Daimler AG and is based in Stuttgart.Nascar viale sarca 336 / edificio sedici 20126 Milan Italy

You can edit or delete your press release Maybach is sponsor of the retrospective “Permanently Becoming and the Architecture of Seeing” by Julian Schnabel. here

08-10-2011 | Fashion, Lifestyle, Trends
Maybach
Maybach Manufaktur starts a social media marketing campaign
August 5th, 2011 – 2011 will be remembered as a very important year for Maybach-Manufaktur. Alongside the celebrations for the 125th anniversary of the automobile, the German luxury vehicles manufacturer has presented interesting novelties both for the marketing and communication and for the production of its saloons. In fact, together with the 2011 luxury vehicles facelift, came the launch of a new website and the activation of the social media
03-02-2011 | Fashion, Lifestyle, Trends
Maybach
Maybach Guard. A high level of protection encapsulated in luxurious curves
March 1st 2011 – Comfort, individualization, luxury and a very high level of safety. These requirements are satisfied to the letter on the Maybach Guard, the luxurious armoured limousine realized with integrated safety systems by the German engineers in Sindelfingen. Responding to the needs of businessmen and Heads of State around the world, the protection offered is absolutely peerless and discreet: even to a specialist eye it is almost impossible to
01-28-2011 | Fashion, Lifestyle, Trends
Maybach
Maybach 62 S: unmatchable comfort combined with peerless performance
January 27th 2010 – Maybach’s leading model, the Maybach 62 S, represents automotive perfection and timeless aesthetic quality. The impressive dimensions, an extremely powerful engine, perfect workmanship and the opportunity to choose personal design options, bring this vehicle one step ahead, even in the high-end luxury segment, and give the owner the impression to dominate the road. The 2010 facelift obtained the result to surpass the already impressive Maybach’s achievements, bringing
01-18-2011 | Fashion, Lifestyle, Trends
Maybach
Maybach 62: timeless design crafted for the upper class
January 14th 2010 – Following the 2010 facelift, the Maybach 62 model enriched its distinctive and self-assured design, emphasized by the impressive overall dimensions and clever use of the inner roominess. The dazzling, sumptuous appearence of this Maybach model can be further enhanced choosing the optional two-tone paint finish, a distinctive mark of timeless style that makes the distinctive profile of the Maybach 62 absolutely eye-catching, a contemporary interpretation of