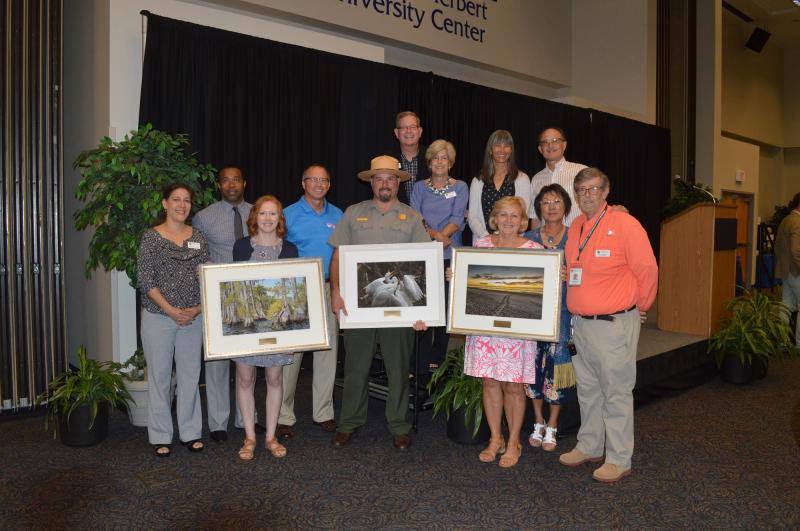 Jacksonville, Fla., June 27, 2019 - Timucuan Parks Foundation joined the City of Jacksonville for the 27th Annual Jacksonville Environmental Awards Luncheon at University of North Florida’s Adam W. Herbert University Center. This year, TPF chose three individuals to receive environmental awards. Craig Morris, a supervisory park ranger with the National Park Service, was chosen for the 2019 Willie Browne Stewardship Award. City Council Member Lori Boyer was chosen for the 2019 Kathyrn Abbey Hanna Award of Merit and Joanne Mattingly was chosen as the 2019 Volunteer of the Year Award winner. “These individuals were all chosen for their dedication to our local parks and preserves,” said Mark Middlebrook, executive director of TPF. “We rely on our park partners, volunteers and the community to support our city’s first-class network of parks and preserves. The work these individuals have accomplished for our natural spaces has been exemplary and we are happy to honor them with these awards.”Chris Hughes, superintendent of the National Park Service’s Timucuan Ecological and Historic Preserve, received the award on behalf of Morris. Morris has served as a ranger at Fort Caroline National Monument since 1987. He is a familiar face to those who visit the park and is dedicated to telling the stories of Jacksonville’s early history including that of the Huguenots of Fort Caroline who hold a unique place in American history as the first to come to North America seeking religious freedom. Morris was the first interpretative ranger at Theodore Roosevelt Area which is made up of 600 acres of hardwoods and wetlands donated by Willie Browne and Morris’ extensive history with the park service includes a chance encounter with Browne. “The Timucuan Parks Foundation believes it is important to remind Jacksonville’s residents of our area’s rich and diverse history,’ said Bob Hays, TPF board chair. “Craig has dedicated his professional career to telling our history and the Foundation is honored to recognize him for his efforts.” The Honorable Lori Boyer is the second recipient of the Kathryn Abbey Hanna Award of Merit. Her assistant, Nicole Spradley, received the award on her behalf. Council Member Boyer was recognized for her critical leadership to reenergize the efforts to provide access to the St. Johns River and for creating the Waterways-Waterfront Activation effort resulting in a much-needed focus on the river. The group has worked to improve the Riverwalks, boat ramps and kayak launches and to create new websites to improve access. Through her leadership, Boyer also helped improve access and visitor experience to the hundreds of miles of tributaries that are part of a network of preserves managed by the Timucuan Trail State and National Parks, a partnership of the City of Jacksonville, the National Park Service and the Florida Park Service.“Partnerships are critical to the success of our emerging network of parks and preserves,” said Hays. “Ms. Boyer provided essential leadership to refocus partnership efforts and the TPF board is honored to recognize her for her efforts.”The Volunteer of the Year Award was presented to Joanne Mattingly for her extraordinary contribution to maintaining Timucuan parks and preserves and for her contribution to TPF’s education and outreach efforts. Mattingly is the second recipient of this award. She has served as a team leader in coordinating and leading shoreline cleanups and trail maintenance projects for TPF and has represented the organization as a site captain at the annual St. Johns River and International Coastal Cleanups. She participates in awareness campaigns and helps lead healthy living walks and service learning projects for a variety of groups.“Joanne is professional, enthusiastic and hard-working and we absolutely need her and other volunteers of her caliber,” said Felicia Boyd, TPF program and outreach director. “We appreciate her time and talents and her drive to engage and give back to the community. Our parks cannot survive without her and our other dedicated volunteers.”TPF, along with its other nonprofit partners, organizes thousands of hours of volunteer efforts every year to help local parks and preserves keep a high standard for visitors. Each year, the organization recognizes an individual for their stewardship efforts and last year renamed the award for Willie Browne. Last year, TPF also added the Kathryn Abbey Hanna Award of Merit and the Volunteer of the Year Award to the annual awards luncheon.Timucuan Parks Foundation 9953 Heckscher Drive Jacksonville, FL 32226About Timucuan Parks Foundation The Timucuan Parks Foundation is a nonprofit organization that preserves, promotes and protects Jacksonville’s vast network of preservation parks. The foundation originated in 1999 with the Preservation Project Jacksonville, Inc. to identify and assist in acquiring the most vulnerable and environmentally sensitive lands in Duval County. The acquisition of lands created the largest urban park system in the United States. The Timucuan Parks Foundation works with park partners, including the National Park Service, Florida State Parks and the City of Jacksonville, to promote environmental stewardship, the health benefits of the parks and preserves, and an appreciation for Jacksonville’s special outdoor spaces. For more information, visit timucuanparks.org.

05-14-2020 | Advertising, Media Consulting, …
Arizton Advisory & Intelligence
France Data Center Market Size to Generate Revenues of over $4 billion by 2025 - …
France data center market size is expected to grow at a CAGR of around 5% during the period 2019-2025. This market research report includes data-driven and deep market insights on the impact of COVID-19 across geographies, segments, and vendor landscape. Leverage Arizton's market analysis to take real-time strategic business decisions and enhance your product portfolios. Key Highlights Offered in the Report: 1. GDPR and CNIL continue to increase cloud data center
05-08-2020 | Health & Medicine
Market Insights Reports
Head And Neck Cancer Drugs/Therapeutics Market Set To Witness Huge Growth By 202 …
Head And Neck Cancer Drugs/Therapeutics Market report has recently added by Market Insights Reports which helps to make informed business decisions. This research report further identifies the market segmentation along with their sub-types. Various factors are responsible for the market's growth, which are studied in detail in this research report. The global Head and Neck Cancer Drugs/Therapeutics market size is expected to gain market growth in the forecast period of 2020
05-30-2019 | Health & Medicine
Coherent Market Insights
Stomach Cancer Drugs Market Expected Observe Major Growth By Key Players 2026 - …
Stomach cancer, is a buildup of abnormal cells that form a mass in part of the stomach. Symptoms of stomach cancer include fatigue, feeling bloated after eating, severe heartburn, severe indigestion, persistent nausea, stomach pain, persistent vomiting, and unintentional weight loss. There are many treatments available for stomach cancer such as targeted drug therapy, chemotherapy, immunotherapy etc. Stomach cancer drugs are also used in combinations to increase their effectiveness to
01-25-2019 | Energy & Environment
Timucuan Parks Foundation
Timucuan Parks Foundation Has Added A New Member to its Board of Directors
Jacksonville, Fla., Jan. 16, 2019 – Timucuan Parks Foundation is pleased to announce Jim Rienhardt has joined the board of directors. Rienhardt is the president of JR Government & Community Solutions, Inc., has a background in park recreation management and previously worked with the National Park Service. “Jim brings a wealth of national park experience to our board and a perspective that will help us better serve our park community,”
12-27-2018 | Energy & Environment
Timucuan Parks Foundation
Timucuan Parks Foundation Has Added Two New Members to its Board of Directors
Jacksonville, Fla., Dec. 26, 2018 – Timucuan Parks Foundation is pleased to announce it has added two new members to its board of directors. Katie Mitura and Kathy Stark have joined the nonprofit organization which protects and promotes Jacksonville’s vast network of preservation parks. Mitura is vice president of marketing and communications at Visit Jacksonville and Stark is a local artist whose favorite subject matter is natural Florida landscapes. “We welcome
10-31-2018 | Energy & Environment
Timucuan Parks Foundation
Timucuan Parks Foundation Presents Awards to Supporters of Preservation Parks
Jacksonville, Fla., Oct. 25, 2018 – Timucuan Parks Foundation joined the City of Jacksonville for the 26th Annual Environmental Awards Ceremony. During the ceremony held at University of North Florida’s Adam W. Herbert University Center, TPF presented three awards to two individuals and one company who greatly contributed to our local preservation parks throughout the year. The 2018 Willie Browne Stewardship Award was presented to Brian Burket with
Comments about openPR
Your portal is fast, simple, and easy to use. Others may have more functions but they also demand more editing time, you have to preformat the text in order to achieve a good result etc. I think openPR is really fantastic!
Andreas Knepper, wallmedien AG