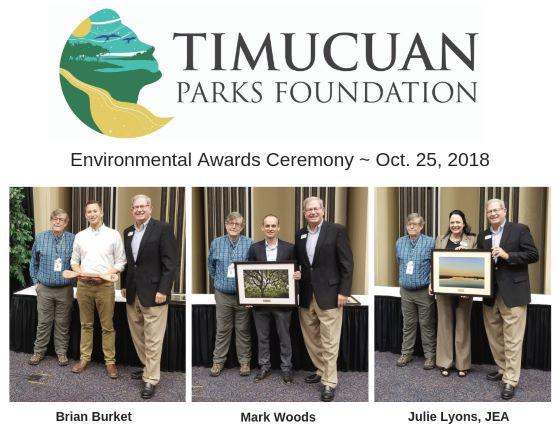 Jacksonville, Fla., Oct. 25, 2018 – Timucuan Parks Foundation joined the City of Jacksonville for the 26th Annual Environmental Awards Ceremony. During the ceremony held at University of North Florida’s Adam W. Herbert University Center, TPF presented three awards to two individuals and one company who greatly contributed to our local preservation parks throughout the year. The 2018 Willie Browne Stewardship Award was presented to Brian Burket with the City of Jacksonville’s Parks, Recreation and Community Services Division. The 2018 Kathryn Abbey Hanna Award of Merit was presented to Florida Times-Union Columnist Mark Woods and the 2018 Volunteer of the Year Award was presented to JEA. “I am honored to present these awards to these champions of our preservation parks,” said Mark Middlebrook, executive director of TPF. “Our success in supporting our first-class network of parks and preserves depends greatly on our park partners, volunteers and the community.”Burket is the first recipient of the foundation’s newly renamed Willie Browne Stewardship Award. Burket serves as the waterfront projects manager for Jacksonville and has worked to integrate the city’s parks, preserves and waterways into the fabric of the community. He believes developing high quality outdoor recreation experiences will create new stewards for public lands and waterways so they are protected for future generations to enjoy.“The City’s parks department today, from top to bottom, is the best I’ve seen in the 35 years I’ve lived in Jacksonville,” said Middlebrook. “Brian is emblematic of the professionalism and dedication I see every day.”The Kathryn Abbey Hanna Award of Merit was given for the first time to Woods for his work featuring National Parks and for his passion for the outdoors and local preservation parks. Since joining the Florida Times-Union in 2003, Woods has written numerous columns about the natural environments across the region and the country. Woods received the Eugene C. Pulliam Fellowship in 2011 and spent a year examining the future of National Parks, which resulted in his 2016 book, “Lassoing the Sun – A Year in America’s National Parks.” “Mark has become a respected voice in the national debate on the future of our National Parks. His concerns about the need to maintain, protect and expand our National Parks are the same issues that confront Jacksonville’s preserves and conservation areas,” said Middlebrook.TPF chose JEA for the Volunteer of the Year Award for their extraordinary contribution to the beautification and maintenance of the Timucuan parks and preserves. Last summer, JEA volunteers, including their summer co-op interns, volunteered more than 150 hours at the national, state, and city preservation parks throughout Jacksonville on projects ranging from shoreline cleanup to trail maintenance to invasive plant removals. “JEA employees have become essential elements of our successful park system and we appreciate JEA affording the opportunity to their employees to give back and engage with the community,” said Felicia Boyd, TPF program and outreach director. “JEA’s community engagement team are always professional, enthusiastic, and hard-working and we have enjoyed working with them. Our parks cannot survive without our volunteers.” TPF, along with its other non-profit partners, organizes thousands of hours of volunteer efforts every year to help local parks and preserves keep a high standard for visitors. TPF added the Volunteer of the Year Award and the Kathryn Abbey Hanna Award of Merit this year. Hanna Park, Jacksonville’s signature oceanfront park, is also named in her honor. Hanna was a distinguished professor, historian and conservationist who wrote several books about Florida. She also served as chair of Florida’s Board of Parks and Historical Places and chaired Florida State University’s Department of History for 15 years. Timucuan Parks Foundation renamed the stewardship award this year for Willie Browne. Browne’s father gave him 600 acres of hardwoods and wetlands in the center of Ft. Caroline at the age of 16 on the condition he maintain it in its natural state. The gift to Browne at “such a young age instilled the responsibility and value of wildlife conservation,” says the National Park Service, which now owns and manages Browne’s property known as the Theodore Roosevelt Area.About Timucuan Parks Foundation The Timucuan Parks Foundation is a federally-recognized 501(c) (3) that preserves, promotes and protects Jacksonville’s vast network of preservation parks. The foundation dates back to 1999, when the Preservation Project Jacksonville, Inc. was established to identify and assist in acquiring the most vulnerable and environmentally sensitive lands in Duval County. The acquisition of lands created the largest urban park system in the United States, including more than 130 square miles of park space and preserves, more than 1,100 miles of river and tributary shoreline and Atlantic Ocean beachfront, and more than 100 miles of upland trails. The Timucuan Parks Foundation works with their park partners, including the National Park Service, Florida State Parks and the City of Jacksonville, to promote environmental stewardship, the health benefits of the parks and preserves for all citizens, and an appreciation for Jacksonville’s special outdoor spaces. For more information, visit timucuanparks.org.Timucuan Parks Foundation 9953 Heckscher Drive Jacksonville, FL 32226 Media Contact: Kelly White Kelly@kwhitecommunications.com

12-23-2011 | Fashion, Lifestyle, Trends
Ascendas
Ascendas Park Square Opens at International Tech Park Bangalore (ITPB)
Ascendas Services (India) Pvt Ltd today held the official opening ceremony of the Ascendas Park Square Mall located in International Tech Park Bangalore (“ITPB”). The official opening of Ascendas Park Square was marked by the inauguration ceremony graced by Ms. Karen Tan, High Commissioner of the Republic of Singapore. The celebrations will extend through the upcoming holiday season, featuring month-long festivities in the mall including concerts and weekend events. Ascendas
12-10-2011 | Leisure, Entertainment, Miscel …
Capriotti's
Capriotti’s Participates in Dana Park Holiday Event
Capriotti’s Sandwich Shop is excited to announce their participation in the upcoming Dana Park Holiday Event being held December 7th, 8th and 9th from 4:00 pm to 7:00 pm. Capriotti’s will be celebrating the holiday season with Bobbie eating contests, Cap Pong and sandwich samples. The event, taking place in the Village Square Dana Park will have live music, the opportunity to make your own music video, caroling, shopping and
01-26-2011 | Energy & Environment
Solea AG
Solar Park Wisselsing (6.3 MW)
Solea proudly announces the commissioning of its Solar Park Wisselsing in the municipality of Osterhofen in October 2010. The Solar Park has an installed nominal capacity of approx. 6.3 MW and is one of the largest solar installations in the entire region. The Solar Park remains governed by the German FIT Law 2009. Employer and operator of the Solar Park is a project company wholly owned by Solea AG. The
11-10-2010 | Health & Medicine
Novalung
Novalung now in “Future Park”
The innovative medical device company moves into new headquarters in Southern Germany On October 27th the new head office of Novalung GmbH was officially opened. During a short celebration CEO Dr. Georg Matheis and COO Hannes Wetscher inaugurated the new offices located in the newly constructed technology park “Zukunftspark” (Future Park) in Heilbronn, approximately halfway between Stuttgart and Frankfurt in the South of Germany. ”Our innovative solutions for lung failure are gaining
09-06-2010 | Business, Economy, Finances, B …
Wilshire Park
Wilshire Park Announces Energy Partnership
Gary Owen, COO of Wilshire Park, Announces an Energy Partnership for 24 Wells in Nevada. Wilshire Park has formed an Oil Exploration Partnership, by its Wilshire Park Energy Fund I, with the purpose of acquiring Working Interests and Net Revenue Interests for wells drilled on a lease for 1,140 acres located in Nevada County and options to acquire Working Interests and Net Revenue Interests in drilling up to 24
03-02-2010 | IT, New Media & Software
at-visions Informationstechnologie GmbH
ONEvision for River Park
J&T decided for at-vison's ONEvision for Hotel River Park Bratislava operated by Kempinski. Technological innovation and a modified usage pattern influence the construction of a hotel room. J&T Real Estate, a. s. evaluated the market for the River Park project in Bratislava for In-Room Technology. At the same time criteria based on previous experiences were more precisely defined. Together with the operator Kempinski J&T Real Estate, a. s. decided for
Comments about openPR
OpenPR is clearly structured and remains true to its principle of confining itself to the essential parts. OpenPR has proven to be a very good and reliable partner to our media agency: Within the shortest time the releases are online and go down well with the media representatives. The success of OpenPR is reflected in the steadily increasing number of press releases. It is good that OpenPR exists!
Ursula Koslik, Director Marketing & PR, F+W Hamburg