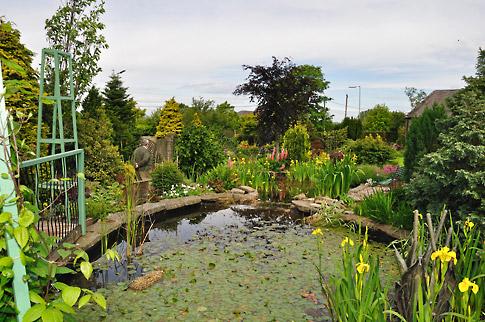 Local gardeners Linda and Toni Hankins are working frantically to prepare their garden for a public opening on the 2nd and 3rd of July as part of the National Gardens Scheme. Their substantial one and a half acres garden, at Davenport Farm, Arthur Lane in Ainsworth, is one of only a handful in Greater Manchester to qualify for the scheme and the only open garden in the Bolton and Bury area this summerThe National Gardens Scheme recognises private gardens of exceptional merit and currently has 3700 listed gardens, from stately homes to semis. These are opened by their owners to the public on selected dates. A small entrance fee, proceeds from refreshments and plant sales all raise money for charity. In 2010 these open days attracted 750,000 visitors and raised over £2.5 million for good causes. “We will be open from two in the afternoon to six in the evening on both dates and look forward to welcoming fellow gardeners to have a look around and a chat,” Linda explained.The Davenport Farm garden has been developed by Linda and Toni over the past 15 years. Toni recalls, “When we moved-in, the house had recently been renovated and the garden was laid to lawn. During the first hot summer we watched as several large brown oblongs appeared in the lawn. On investigation we found these to be caused by the floors and foundations of previous out buildings that were only minimally covered with topsoil. I hired in a road drill to break up the concrete and imported 400 tonnes of topsoil to give depth and re-grade so that we could create the new garden.”The current garden has something for everyone. There are formal lawns and borders, a mini woodland walk, secluded niches to sit, two ponds, a vegetable garden, a recently planted orchard and a newly constructed orangery. Toni recently hired in a mini excavator to create two deep trenches that he filled with rich topsoil and manure to give the apple and pear trees a good start. Davenport Farm is on the 160 metre contour, that’s more than 500 feet above sea level, the site is therefore exposed to strong winds, subject to late and early frosts and has a lot of rainfall.“Most of my career has been in electrical engineering, building and running Rowe Hankins, the Bury based rail systems engineers. I became chairman, and stepped back from day-to-day running of the business in 2010 and this has given me more time to devote to the garden. Linda and I are delighted to have been accepted into the National Gardens Scheme and are currently working all the hours we can to present the garden at its best and make the day as enjoyable as we can for our visitors.”More Information High resolution images are on the web at www.ainsmag.co.uk/powpr/4942to1a-ngs.htmAll the gardens in the National Gardens Scheme are listed in their Yellow Book. For this and for more information about the NGS please consult their web site www.ngs.org.uk.About National Gardens SchemeThe National Gardens Scheme was founded in 1927 to raise money for the nurses of the Queen's Nursing Institute (QNI) by opening gardens of quality and interest to the public.The simple, but radical idea was to ask individuals to open up private gardens for 'a shilling a head'. At that time garden visiting was already a well established pastime (as seen in Pride and Prejudice), but only for a privileged few. In the first year 609 gardens raised over £8,000. A network of volunteer County Organisers was set up and by 1931 over 1,000 private gardens were open and Country Life magazine produced a handbook, known as "The Yellow Book" because of its bright cover.After the Second World War, the National Health Service took on the District Nursing Service, but money was still needed to care for retired nurses and invest in training so the NGS continued as before. In 1948 the NGS offered joined forces with the National Trust to restore and preserve important gardens. In return, the National Trust opened many of its most prestigious gardens for the NGS. Despite massive inflation in the post-war years, the entrance fee was held at one shilling. After a great deal of persuasion, more realistic entrance fees were introduced in the 1970's and the gardens began to raise significant donations.In 1980 The National Gardens Scheme Charitable Trust was established as an independent charity, with Her Majesty Queen Elizabeth the Queen Mother as Patron and Her Royal Highness Princess Alice, Duchess of Gloucester as President. In 1984 Macmillan Cancer Relief joined the list of beneficiary charities. In the years that followed other charities joined including Marie Curie Cancer Care, Help the Hospices and Crossroads Caring for Carers.Over the years the gardens have changed in size and style and NGS now has thousands of smaller gardens. However several 'Pioneer' gardens still open for us and each year some rejoin under new ownership.Linda and Toni HankinsDavenport Farm, Arthur Lane, Ainsworth, Bolton, BL2 5PWTel. 07710898332 E-mail: t.hankins@rowehankins.com

10-29-2018 | Fashion, Lifestyle, Trends
The Tech Reps
National Smart Home Day
National Smart Home Day Event Press Release National Smart Home Info@NationalSmartHome.org For Immediate Release: National Smart Home Plans National Smart Home Day to help educate and bring awareness to homeowners for smart home living National Smart Home will hold National Smart Home Day on Saturday November 3rd for manufacturers suppliers, dealers and homeowners. The event, which will be held at Rayva Home theaters showroom in Valhalla NY and streamed live across the
09-09-2016 | Leisure, Entertainment, Miscel …
Phatmagic
NATIONAL AWARD
From Abracadabra to alakazam magician inline for National award Midlands, Sept. 7. 2016 - A MAGICIAN who has fought back from depression could be in line to win a national award. Eddie Young, who runs PhatMagic, has been nominated for a Kallikids award The 42-year-old, from Branston, set up Phat Magic more than four years ago after his wife, Debbie, bought him a magic set to 'give him something to do' while
10-17-2014 | Health & Medicine
Relaxa UK
National Stress Awareness Day
National Stress Awareness Day is on Wednesday 5th November 2014. Relaxa is offering employee stress & wellbeing health promotion packages starting at £255 on or around this date - incorporating a range of stress & wellbeing activities for your staff. There are 9 cost-effective stress and wellbeing promotion packages available below: 1) Stress Health Promotion Package 1 - £255.00+vat 2) Stress Health Promotion Package 2 - £399.00+vat 3) Stress Health Promotion Package 3
04-16-2012 | Business, Economy, Finances, B …
The AGRICOM Project
AGRICOM National Workshops Started
Partners from the European AGRICOM project have carried out national workshops in Germany and Greece on February 14th and 15th 2012, respectively. These national workshops, along with the upcoming national workshop in Italy and the Netherlands, support one of the key initial steps of the AGRICOM project, namely the execution of a detailed needs analysis in the agricultural sectors of the partner countries regarding vocational educational training (VET) and competence
02-02-2012 | Business, Economy, Finances, B …
The National Trust bucks economic trends to have bumper December
The National Trust
The National Trust has reported a substantial increase in its visitor numbers, and retail and catering sales in December 2011 compared to the previous December, despite a backdrop of challenging economic times and lack of consumer confidence. There were more than half-a-million (521,000) visitors to Trust properties in December 2011, an increase of 74 per cent on the previous year*. Factors affecting the large jump in visitor numbers include the mild
03-23-2011 | Associations & Organizations
AllAboutCareer
National Employability Campaign Begins
Graduates are increasingly unlikely to find themselves with a place on a graduate scheme as the number of student graduating vastly outstrips the number of places available. Despite an expected increase in the number of graduate vacancies in 2011 by 3.8% the number of vacancies offered according to the Association of Graduate Recruiters will still be less than 21,000. The AllAboutCareers.com National Employability Campaign, which is aimed at all undergraduates, hopes
Comments about openPR
I can't but agree to the positive statements about your portal: easy to use, clear layout, very good search function, and quick editing!
Jens O'Brien, Borgmeier Media Communication