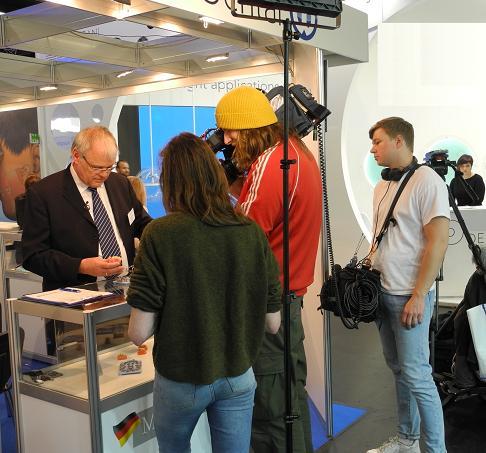 Dr. Walser Dental, whose sectional matrix system dentists successfully use worldwide, recently presented its new invention at the world's largest dental trade fair.Already years ago, dentists had asked the managing director of Dr. Walser Dental, Gerhard R. Daiger, to develop a dental product that would allow dentists to fill four surfaces of a tooth. So, in recent years, Daiger has come up with some solutions, but none was really useful and feasible. Weeks ago, he finally came up with the brilliant idea.And so, in many time-consuming experiments and tests, Gerhard Daiger developed a dental matrix (a kind of formwork around the tooth) for 4-surface fillings, which automatically adapts to the tooth. At the same time, he contacted patent attorneys to register and protect the trademark worldwide.Even before the initial results of selected dentists who were to test the new product, he recently went with his company Dr. Walser Dental and his team as an exhibitor at the world's largest dental fair and had a huge success. Out of 2,327 exhibiting companies with hundreds of thousands of exhibited products and trade visitors from 166 countries, Daiger's new invention was voted into the "Highlights". So the rush was great during an interview with a camera crew. Especially when his team presented the prototype and then got as many orders from around the world. "I did not expect so much success because the experience from the past showed that new products take time to be accepted," says Gerhard Daiger.Already two years earlier, Senator Daiger and his team were at the world's largest dental fair in Cologne. He also presented there the then latest innovation, which triggered a true press hype. 30 representatives of the press, who had previously registered, came to the booth to learn more about the innovation, which from over tens of thousands of products was elected into the "Highlights". An RTL television team was also at the booth. On the second day of the fair, another camera team visited Dr. Walser Dental to film in detail the innovative product highlight selected by experts, to interview Daiger and to put together information.Back at Lake Constance from this year's fair, he got the first evaluations of the tests that confirmed his invention. Dentists reported that the time needed to reconstruct the tooth was almost halved, saving the dentist time and protecting the patient. MIH patients also benefit from this new tooth matrix. MIH, Molar incisor hypomineralization, is a developmental disorder of the hard tooth substance. In this case, it comes even before the breakthrough of the affected teeth into the oral cavity to yellowish-brownish or whitish-cream-colored spots on one or more first permanent molars. Since this malformation is primarily in molars and incisors, the disease has received the name Molar incisor hypomineralization. In Germany, about 10% of primary school children suffer from this disease.More: www.walser-dental.comDr. Walser Dental GmbH Katja Wieczorek Fritz-Reichle-Ring 18 78315 Radolfzell / GERMANY Tel: +49 7732 3300About Dr. Walser Dental GmbHDr. Walser Dental GmbH has been manufacturing dental instruments for distribution worldwide since 1948. During this period the company has registered numerous patents. True to the motto “for dentists by dentists” exhaustive scientific and practical experience are continuously included in the manufacturing of all dental instruments. With an export share of 75% the company delivers their products to more than 120 countries worldwide.

You can edit or delete your press release Invention of Dr. Walser Dental captures the world here