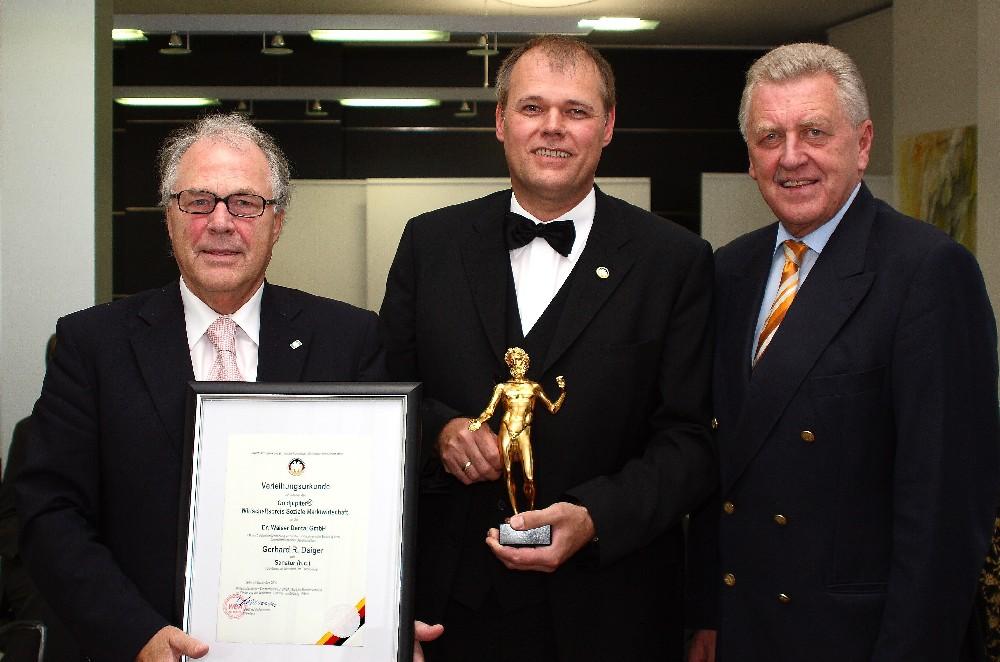 “Bundeswirtschaftspreis“ award goes for the first time to manufacturer of dental instruments Gerhard R. Daiger, owner of Dr. Walser Dental, was awarded the „Ehrensenatorenwürde Senator h.c.“ on September 25, 2009 and at the same time the highest Economy prize of the “Bundessenat”, the „Goldjupiter“. Chancellor Angela Merkel, Minister President Günther Oettinger and Minister of Economics Ernst Pfister who delivered the welcome note queued up with other congratulants.What’s the Oscar for the Hollywood actors is the Goldjupiter for the German Medium-Sized Enterprises. The Goldjupiter epitomizes the honourable principle of the Roman Senate of the ancient world: “Challenge and encourage the young, support the old”. And this time, the awardee of this coveted trophy is Dr. Walser Dental GmbH Radolfzell. Until now, 23 entrepreneurs of 4 million companies have been awarded this economy prize.The official ceremony took place in Constance in the Chamber of Industry and Commerce with many guests out of politics, economy as well as TV and representatives of the press. The opening and laudatory speech was given by the representative Chief Executive of the CCI, Immo Leisinger who also portrayed the career of Gerhard Daiger. There were 12 awards in 2006 alone for Dr. Walser Dental who managed about 300 innovations.The “Bundessenat” Economy and Technology in the social federal association Economy-Education-Labour, Germany (WBA) Berlin, registered at the public list of the German Bundestag, represented by the president Siegfried Auffermann, presented the treasured economy prize „Goldjupiter“ to Gerhard Daiger. Herewith, Daiger’s outstanding social and entrepreneurial skills are honoured. With this gold-plated statue, the WBA decorates economically responsible people who serve the common welfare in Germany in a particular way by their actions and efforts and whose aim is to contribute to the improvement of the future viability of economy and society in the Federal Republic of Germany by creating and preserving training- and workplaces.At the same time, the owner of Dr. Walser Dental received from the Bundessenat the certificate of the award „Ehrensenatorwürde Senator h.c.“ (Bundessenat Wirtschaft und Technologie, Europasenat zur Förderung der wirtschaftlichen, wissenschaftlichen und kulturellen Beziehungen zwischen den Staaten und Regionen Europas und Deutschland). Thus, Gerhard R. Daiger was taken into the Bundessenat in Berlin and now belongs to the 100-headed board.The Dr. Walser Dental has a higher-than-average training rate of 29%. For comparison: The training rate of major corporations just averages 2 to 5 per cent. But the rate at training companies averages 6,4 per cent. If you consider the training rate of handicraft business with many small craft enterprises, the rate averages 10 per cent.More informations: www.walser-dental.comAbout Dr. Walser Dental GmbHDr. Walser Dental GmbH has been manufacturing dental instruments for distribution worldwide since 1948. During this period the company has registered numerous patents. True to the motto “for dentists by dentists” exhaustive scientific and practical experience are continuously included in the manufacturing of all dental instruments. With an export share of 75% the company delivers their products to more than 80 countries worldwide.AwardsIn 2006 elected into the Top 10 of Top100 in the category innovative success as first medical device company, 2007 again Top100 company, 2007 “International Best Factory Award” in the Top 3, 2007 and 2008 and 2009 nominated for “Grosser Preis des Mittelstandes” and awarded the “Industriepreis 2008”. Top 100 product in 2008 in the USA. Honoured for social responsibility in the years 2007, 2008 and 2009 by minister of economics of Baden-Württemberg and Catholic Charities.Dr. Walser Dental GmbH Claudia Ranzinger Fritz-Reichle-Ring 18 78315 Radolfzell, GERMANY