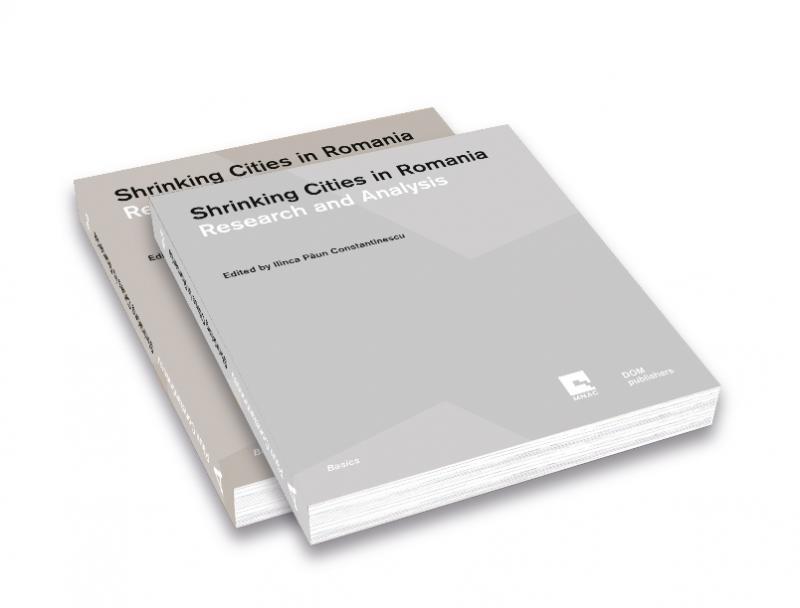 Shrinking cities are a worldwide phenomenon. While megacities keep on growing, the mid-sized and smaller cities are often left to deal with dwindling population numbers. These shrinking processes can also trigger uncontrollable dynamics. They are often looked upon by governments and administrations with a degree of trepidation, sometimes even becoming a taboo issue. Ignoring the phenomenon has become quite common in a country that is especially impacted by it due to the large scale of emigration: Romania.The two-volume standard work Shrinking Cities in Romania, edited by the Romanian architect Ilinca Păun Constantinescu, is a case study which looks at the decline of the cities in this country some thirty years after the collapse of the Warsaw Pact. The political and economic conditions across Eastern Europe changed drastically and the affected countries were suddenly confronted with a capitalist market economy. The current globalisation model may succeed in stimulating overall economic growth, but this is done at the cost of social and spatial division. This research work provides a deep understanding of these issues. In order to achieve this, the editor assembled a team of academics, artists, architects and urban planners in an interdisciplinary research project. In the first volume the authors research and analyse the phenomenon of shrinking cities, the second volume then goes a step further and formulates solutions to these issues and envisions perspectives for these marginalised places.This book wants to sensitise on the current and all-pervasive, but altogether too-little discussed topic: the socio-cultural, physical, economical and demographic decline of cities as a phenomenon that is especially wide-spread in Romania, but must be seen in a global context. It brings together the different facets of urban change in a multi-layered kaleidoscope, designates and identifies the multitude of causes. The results of this research work can also be adapted to other regions of the world.This work has come forth from a well received exhibition that was held at the National Museum of Contemporary Art (MNAC) in Bucharest in 2016 and illustrates and expands on the topics that were introduced there. The research work was awarded the 2014 AD Astra Prize and the 2017 Architectural Prize in the area Visions and Research.Ilinca Păun Constantinescu (ed.) Shrinking Cities in Romania Research and Analysis (Vol. 1), Responses and Interventions (Vol. 2) With introductions by Philipp Oswalt and Tim Rieniets 210 × 230 mm, 824 pages 300 images, soft cover ISBN 978-3-86922-372-8 (English/Romanian) € 48,00 / CHF 58,60 May 2019. DOM publishers, Berlingisela graf communications Gisela Graf Schillerstr. 20 D 79102 Freiburg T +49 761 791 99 09 F +49 761 791 99 08 contact@gisela-graf.com www.gisela-graf.comgisela graf communications supports publishers, museums and institutions specialising in architecture, design or art, with professional press and PR work, also on an international level. Communications — Individual concepts and texts for media relations Connections — Media contacts, interview arrangements, events — anything that brings people and subjects together Corrections — Editing and copy editing of texts and specialised publications, catalogues and brochures

01-15-2019 | Advertising, Media Consulting, …
HTF Market Intelligence Consulting Pvt. Ltd.
Romania Market Overview 2019-2025: Country Intelligence Key players (Vodafone Ro …
HTF Market Intelligence released a new research report of 42 pages on title 'Romania: Country Intelligence Report' with detailed analysis, forecast and strategies. The study covers key regions that includes North America, Europe, Asia-Pacific (APAC), Middle East and Africa (MEA) or Latin America and important players such as Vodafone Romania, Telekom Romania, orange Romania, RCS&RDS (Digi), Lycamobile, UPC romania, Nextgen Request a sample report @ https://www.htfmarketreport.com/sample-report/871934-romania-country-intelligence-report Summary Romania: Country Intelligence Report "Romania:
02-05-2018 | IT, New Media & Software
MarketResearchReports.biz
Romania: Country Intelligence Report
"Romania: Country Intelligence Report", a new Country Intelligence Report by GlobalData, provides an executive-level overview of the telecommunications market in Romania today, with detailed forecasts of key indicators up to 2022. Published annually, the report provides detailed analysis of the near-term opportunities, competitive dynamics and evolution of demand by service type and technology/platform across the fixed telephony, broadband, mobile and pay-TV segments, as well as a review of key regulatory
06-13-2017 | Business, Economy, Finances, B …
ReportsWorldwide
Agrochemicals Market in Romania
ReportsWorldwide has announced the addition of a new report title Romania: Agrochemicals: Market Intelligence (2016-2021) to its growing collection of premium market research reports. The report “Romania: Agrochemicals: Market Intelligence (2016-2021)” provides market intelligence on the different market segments, based on type, active ingredient, formulation, crop, and pest. Market size and forecast (2016-2021) has been provided in terms of both, value (000 USD) and volume (000 KG) in the report. A
04-10-2017 | IT, New Media & Software
MediaSoft
Stada Romania Deploys MediaSoft CRM
Cakovec Croatia – 10 , April 2017 - After several Stada countries who run with Mediasoft CRM solutions, Stada Romania joins the club of satisfied users. Stada Romania had an very comprehensive tender on which many international Pharma CRM vendors participated but at the end Mediasoft won. The whole implementation started end of 2016 and from 1st of April 2017 Stada Romania started to use Mediasoft CRM by it’s full potential
02-09-2017 | Business, Economy, Finances, B …
ReportBazzar
Chocolate Confectionery in Romania
Chocolate confectionery continued to enjoy the perception of being a luxury product among the majority of Romanian consumers, who were affected by the adverse economic conditions. 2016 showed good economic growth, to continue the good GDP performance started in 2013. Chocolate confectionery posted positive growth rates in both volume and value terms, a reflection of the increased confidence in the economy as well as the recovery of incomes and the
04-23-2009 | Industry, Real Estate & Constr …
PMR Publications
Construction sector in Romania 2009
Construction was the most important factor of the strong economic growth of Romania over the past several years, which topped 7.1% in 2008. However, the problems on the international financial markets affected the construction industry, which was heavily dependent on banking credit. Non-residential construction, which accounts for half of the construction output, will be strongly hit, while residential will decrease only slightly in 2009 and civil engineering, which depends on
Comments about openPR
I can't but agree to the positive statements about your portal: easy to use, clear layout, very good search function, and quick editing!
Jens O'Brien, Borgmeier Media Communication