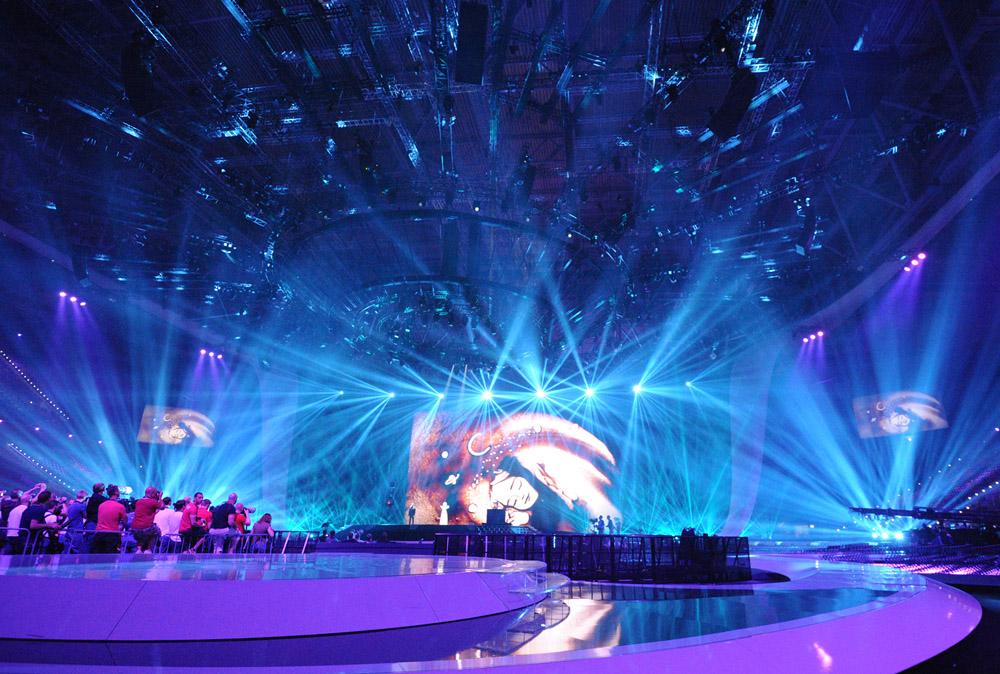 Oyten, Germany – MAY 20, 2011 – The FALCON® FLOWER made quite an impression at the 56th Eurovision Song Contest recently held at Düsseldorf Arena in Germany. The show is known for making technical leaps and bounds and this year marked the biggest Eurovision in history with regards to lighting equipment and live audience. Germany had not hosted the show since 1983 but when Lena Meyer-Landrut won Eurovision 2010 in Norway with her song “Satellite”, Germany was determined to show the world how a show should be done...big. The show’s name says it all. It’s a song contest between member countries of the European Broadcasting Union (EBU). The public votes for their favourite song and the winner hosts the contest the following year. 43 countries competed this year, tying for the most since Serbia 2008. Three live broadcasts were held – two Semi-finals on May 10th and 12th and the Finals on May 14th in front of the largest live viewing audience in Eurovision history with 36,000. Another 200 million estimated television and internet viewers make Eurovision the largest music television program in the world.Internationally known German Lighting Designer Jerry Appelt specified masses of lighting to deliver unique looks for the 43 countries, three interval acts and opening act for the Final broadcast. Over 2,100 moving lights were incorporated into the design, with the majority hung overhead, spanning the entire space of Düsseldorf Arena. Clearly, this needed a powerful balance from the floor. 24 FALCON FLOWER 3000W made a massive impact at floor level with 4 placed on each side of the stage at its widest position and another 12 lined along the back LED stage wall. 4 more were placed on the catwalks in front of the stage.16 FALCON FLOWER 7000W were placed in the ceiling, with 8 hung on moving truss directly behind the stage. Lighting control was delivered via grandMA2 full-size consoles, triggered via timecode. The FALCON FLOWER is a unique xenon multi-beam effect-light with colour changer, pan-and-tilt movement, electronic and mechanical dimmer, douser, electronic strobe and integrated electronic power supply. An infinitely variable, rotating reflector produces up to 30 individual beams. The fixture delivered an exciting punch to many of the songs on Eurovision with multibeam effects in the shape of stars or flowers or just a simple yet powerful beam. Concert and Stage Producer Ola Melzig, who has worked on nine Eurovision productions, worked closely with the delegations and artists regarding the details of each performance including lighting, video, pyro, sound and camera angles. “The FALCONs ROCK – there was no doubt when those things were fired, the effects were awesome. Jerry used them for very special looks and I can tell you, those countries were thrilled.” Appelt said of the FALCON: “I use the 3K all the time. It’s very powerful and when I need that look, it’s the only one I go to. Düsseldorf Arena is huge and I wanted beams to reach to every corner. This was actually the first time I used the 7K and the results were fantastic. Really great light and nice beam effects – I’ll definitely use them again.”Cape Cross of Cologne, Germany provided all lighting and rigging for the show, sending 130 trucks, each with 40 tonnes of equipment. Thomas Brügge, Managing Director of Cape Cross said, “We use FALCONs in almost every show we do – they’re incredibly strong. Not many lights can do what they do. The Xenon is a very special form of light. I’ve seen many companies try to copy it but none have succeeded like the FALCON. It’s really brilliant.”The company behind the creative production of Eurovision 2011 was Brainpool TV GmbH, led by Producer Jörg Grabosch. Brainpool managed all creative aspects including staging, lighting, pyro, hosts, viewing room, technical crew, etc. and managed the companies in charge of these areas: Cape Cross (lighting & rigging); Creative Technology (video); Stage Kinetic (moving LED screen); MCI (set construction); and LunatX (pyro).In the end, Azerbaijan was crowned winner with the song “Running Scared”, earning 221 points. Eurovision 2012 will be held in Baku, Azerbaijan. For more information about FALCON, visit www.ao-technology.comEurovision Design Team: Lighting Design: Jerry Appelt Stage Design: Florian Wieder FOH: Matthias Rau, Matthias Hagel, Wolfgang Nöhrer, Sascha Matthes, Michael Giegerich, Markus Ruhnke, “Matze” Meyert Host broadcaster: NDR Executive Producer: Thomas Schreiber Executive Supervisor of EBU: Jon-Ola Sand- Text by Joan Lyman -About A & O Technology: A&O Lighting Technology GmbH, founded by Marco Niedermeier, has been engaged since 1995 in the distribution and rental of specialized lighting equipment to numerous internationally recognized architectural and entertainment projects. Its exclusive distribution portfolio includes the FALCON® range, which comprises a variety of architectural spotlights and searchlights manufactured by alpha one.High-quality equipment, international cooperation and a creative team of employees have allowed A&O Technology to develop into an enterprise active worldwide in the distribution and rental of high-tech products for a wide range of applications — often to spectacular effect.A&O Technology is headquartered in Oyten, Germany, with subsidiaries or bureaus in Abu Dhabi, UAE; Los Angeles, USA; and Blackburn, UK; and holds project partnerships worldwide.May 2011 / A&O Lighting Technology GmbH, Industriestraße 31-33, 28876 Oyten, Germany, Telephone: +49 (0) 42 07 / 66 84-0, Internet www.ao-technology.com, Contact: Tanja Niedermeier

11-05-2018 | Health & Medicine
Future Market Insights
GCC Medical Gloves Market Size By 2026 | Paul Hartmann AG, Hotpack Packaging Ind …
The GCC medical gloves market is estimated to increase from US$ 99.5 Mn in 2016 to US$ 240.8 Mn by 2026, registering a CAGR of 9.2% over the forecast period 2016–2026, according to a latest report titled “GCC Medical Gloves Market: Industry Analysis & Opportunity Assessment, 2016-2026” published by Future Market Insights. According to Future Market Insights analysts, an increasing awareness regarding hygiene and health and safety is boosting the growth
08-28-2018 | Advertising, Media Consulting, …
Agrimony Market
Agrimony Market Key Players Emorsgate Seeds, Falcon Russia., Healingherbs Ltd.
Agrimony Market Introduction Agrimony is a genus of 12–15 species of perennial herbaceous flowering plants in the family Rosaceae. Commonly it is known to be a domestic medicinal herb, which is native to the temperate regions of the Northern Hemisphere, with one species also in Africa. The agrimony herb has spikes which bear rows of tiny yellow flowers, known as church steeples. The agrimony is also characterized by having fruits that
02-27-2018 | Business, Economy, Finances, B …
business news
Global Turn Coordinators Market 2018 - EGC, FALCON GAUGE, Century Flight
The statistical surveying information incorporated into the Turn Coordinators report is the aftereffect of significant essential and optional research exercises. The report fragments the global Turn Coordinators market based on makers, item compose, applications, and regions. In this report, each fragment is contemplated completely and measurements are introduced in detail. The report offers an exact outline of the global Turn Coordinators advertise covering key factors, for example, drivers and restrictions
11-21-2017 | Industry, Real Estate & Constr …
business news
Global Contact Grills market 2017 - Westahl, Falcon, Dualit, Livart, Zojirushi
Apex Market Reports, recently published a detailed market research study focused on the "Contact Grills Market" across the global, regional and country level. The report provides 360° analysis of "Contact Grills Market" from view of manufacturers, regions, product types and end industries. The research report analyses and provides the historical data along with current performance of the global Contact Grills industry, and estimates the future trend of Contact Grills market
09-14-2017 | Business, Economy, Finances, B …
market research 2017
Contact Grills Market Analysis 2017-2022 Delonghi, Breville, Westahl, Falcon
Global Contact Grills Market by manufacturers, Types, Segment and Region A market study based on the " Contact Grills Market " across the globe, recently added to the repository of Market Research, is titled ‘Global Contact Grills Market 2017’. The research report analyses the historical as well as present performance of the worldwide Contact Grills industry, and makes predictions on the future status of Contact Grills market on the basis of
08-18-2015 | Business, Economy, Finances, B …
A&O Lighting Technology GmbH
FALCON® BEAM 2 – A&O Technology launches new searchlight
In the new FALCON BEAM 2, A&O Technology is bringing a brilliant new searchlight onto the market. With its extended feature set, the FALCON BEAM 2 is now the first choice for demanding illuminations in the fields of entertainment and architectural lighting. Thanks to a new high-precision parabolic reflector with an ultra-reflective coating, the FALCON BEAM 2 guarantees dazzling brightness. The colour changer is based on the tried-and-tested technology
Comments about openPR
I can't but agree to the positive statements about your portal: easy to use, clear layout, very good search function, and quick editing!
Jens O'Brien, Borgmeier Media Communication