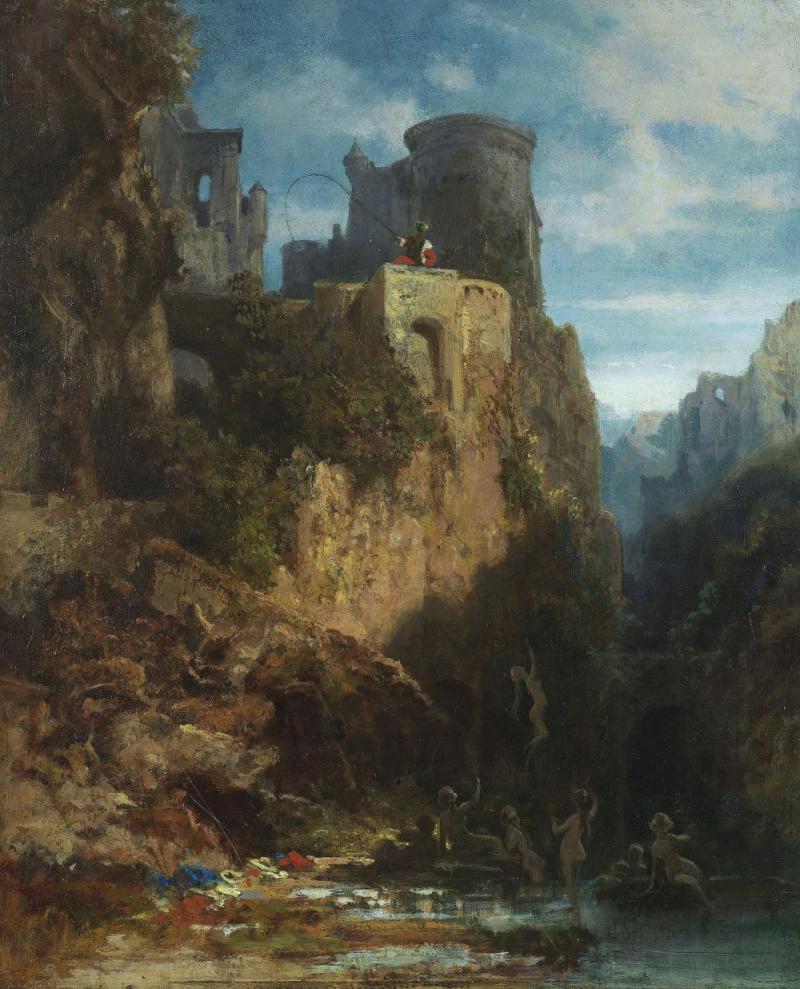 Munich, May 24, 2019, (kk) – The auction season celebrating the 65th anniversary of Ketterer Kunst in Munich kicked off with a very successful auction of 19th Century Art that grossed a total of more than € 1.3 million – and that is with just 95 objects on offer. New records and sharp increases made for a great atmosphere in the saleroom. ”It was a very successful auction, indeed”, says Robert Ketterer, auctioneer and owner of Ketterer Kunst. “The excellent sales quota of almost 80% by lots and an average increase of 107% per sold object are just as impressive as more than 30% new buyers. Another remarkable fact is that the small range of just 95 works on offer included 34 works, more than a third, that yielded results above the € 10,000 mark.” Top 5 No. 04: Carl Spitzweg – Nixenfang. € 137,500* Calling price: € 36,000 No. 69: Alexander Koester – Enten, Reichenau. € 100,000* Calling price: € 40,000No. 79: Peder Mørk Mønsted – Wintersonne im Engadin. € 92,500* Calling price: € 36,000No. 41: Josef von Brandt – Standartenreiter auf dem Schlachtfeld. € 87,500* Calling price: € 25,000 No. 64: Edward Theodore Compton – Lyskamm (Monte-Rosa). € 68.750* Calling price: € 17,000 The auction commenced with seven works by Carl Spitzweg, which, owing to the great demand, were not only all sold but also saw excellent increases. The top lot in this array, and eventually also the entire auction’s number one, was “Nixenfang” (lot 4), which was called up at € 36,000. The museum quality motif was rediscovered after 100 years, and did not only convince art lovers from the artist’s home region, even though it was a Bavarian who in the end awarded the masterpiece with € 137,500* over the phone, thus providing a four-fold of the calling price.With € 42,500* a bidder present in the saleroom offered more than twice the calling price for Carl Spitzweg’s “Talschlucht mit Sennerin” (lot 7), relegating two ambitious commissions from Bavaria and Baden-Württemberg to places second and beyond. More than half a dozen works by Alexander Koester, led by a very strong composition of ducks on Lake Constance, were likewise successful. A generous written bid from Bavaria let the work “Enten, Reichenau“ (lot 69) soar to two and a half times its calling price. At € 100,000* both the saleroom as well as phone bidders from Southern Germany and North Rhine-Westphalia had to admit defeat. Bidders from around the world felt attracted by Peder Mørk Mønsted‘s photo-realistic painting “Wintersonne im Engadin“ (lot 79), which is why it was little surprising that the idyllic masterpiece climbed from a starting price of € 36,000 to a result of € 92,500* in no time, providing a new German Record. Despite tough competition from Austria, Sweden, Denmark and Canada, the magnificent snowy landscape will remain in Germany.With Josef von Brandt’s “Standartenreiter auf dem Schlachtfeld” (lot 41) an impressive motif from Polish history was called up. As expected, strong interest came from Poland, however, eventually a collector from Canada stood his grounds with a bid over three and a half times the calling price. The respectable amount of € 87,500* also left German competitors empty handed.A new record was realized by Edward Theodore Compton’s ”Lyskamm (Monte-Rosa) (lot 64). With a result of € 68,750* a bidder from Great Britain offered four times the calling price of € 17,000 and set a new top mark for a work by the artist on the German market. The saleroom, international commissions and phone bidders from Germany, Austria, Italy and Switzerland were left with nothing. Another work by Compton, his “Finsteraarhorn vom Rhônegletscher” (lot 66) will remain in Southern Germany for € 22,500*, that is two and a half times the calling price. A private collector from Northern Germany provided a new World Record by standing his grounds against fierce competition from all over Germany, as well as from Belgium, France and Great Britain in the race for a fascinating bronze by Sascha Schneider. For a result of € 60,000* he may now call the ”Jünglingsbüste mit ägyptischer Kopfbedeckung“ (lot 59) his own.It took a collector from Brandenburg the amount of € 46,250* to take Karl Hagemeister’s ”Kemnitzer Heide“ (lot 60) home with him. Called up at € 23,000, mainly art lovers from the Berlin area competed for the painting from the artist’s important stylistic development phase as a result of which he attained an impressionist concept of nature. The same buyer also won the battle for Hagemeister’s second work ”Wendische Bäuerin“ (Los 39), which he lifted from € 9,000 to € 16,250*. More great results were realized by, among others, the following:Lot 42, Franz von Lenbach (oil), Otto Fürst von Bismarck. Calling price € 8,000, result € 37,500* Lot 56, Hans Thoma (oil), Amor erspäht die Liebenden. Calling price € 3,000, result € 30,000* Lot 40, Friedrich Kallmorgen (oil), Sommergarten mit Blick… Calling price € 9,000, result € 26,250*Unsold lots can be acquired in the post auction sale until June 21, 2019. Lists with auction results are available by phone on +49 (0)89-552440.* The rounded result is the hammer price + 25% buyer’s premium for hammer prices up to € 500,000.The family company Ketterer Kunst (www.kettererkunst.com and www.ketterer-internet-auctions.com), with headquarters in Munich and branches in Hamburg, Duesseldorf, Berlin and the USA, was founded in 1954. It is one of the leading European houses for auctions of Fine Art from the 19th to the 21st Century and Rare Books. The latest art market review for Fine Art 2018, compiled by artprice.com, ranks Ketterer Kunst on place 16 in the global TOP 100. The auctioneer's clientele predominantly consists of international collectors, art dealers, curators and museums.Press Contact: Ketterer Kunst Joseph-Wild-Str. 18 81829 München Michaela Derra M.A. Tel.: +49-(0)89-55244-152 Fax +49-(0)89-55244-177 E-Mail: m.derra@kettererkunst.de www.kettererkunst.de Client Contact: Ketterer Kunst Joseph-Wild-Str. 18 81829 München Tel. +49-(0)55244-444 Fax: +49-(0)55244-177 E-mail: infomuenchen@kettererkunst.de

11-16-2018 | Politics, Law & Society
i.b.s. International Operative Services e.K.
German Maritime Security 2018, German Government Statement!
Despite all international and national efforts, piracy remains a serious peril for the international shipping industry. Especially in Asia (i.e. Chittagong/Bangladesh or on the Strait of Malacca), but also in South America (e.g. Bay of Santos/Brazil or in the port of Callao/Peru) robbery or piracy there has recurred in the recent past. At the West African coast the number of incidents had raised even by 50% with 66 incidents this
07-26-2017 | Business, Economy, Finances, B …
Teck Language Solutions Inc.
More German Investments Mean More German Translations
Why Language Continues to be an Obstacle for Investing in Germany Germany is one of the prime markets for foreign investments, with an estimated 4% of global direct investment making its way into the country. In fact, the world’s second richest man, Warren Buffett, who is only beaten to the top spot on the financial leaderboard by Microsoft Founder Bill Gates, believes Germany to be a ‘great market’, and confirms the
08-18-2015 | Industry, Real Estate & Constr …
IKA®-Werke GmbH & Co. KG
German Design Award 2015
German Design Council Awards a Special Mention to the LR 1000 Laboratory Reactor and Nominates the Tube Mill Staufen, Germany, February 23, 2015 — For the second time, a device produced by IKA® Werke has received the "Special mention for exceptional design quality" award from the German Design Council. The company was presented with the award in the "Excellent Product Design — Industry" category as part of the German Design Award 2015
12-24-2011 | Politics, Law & Society
bunk-alliance Rechtsanwälte
German Local Trade Tax
All the companies in Germany are liable to pay not only corporate income tax, whose rate is nowadays about 15% of the annual profit of the company, but also trade tax (Gewerbesteuer), which is a tax of German characteristics. Why would we say that trade tax is of German characteristics? Because it is different from the corporate income tax, which is charged by the German Federal Government and it is difficult
01-08-2010 | Business, Economy, Finances, B …
Integral Fusion e-Services Pvt. Ltd.
Integral Launches German Bureau
Integral Launches German Bureau Appoints Suchit Manchanda as the Head of Operations January 4, 2010: Germany: Integral Fusion, a leading software services firm, has launched operations in Germany and announced the appointment of Suchit Manchanda as their Managing Director. The German bureau will be responsible for strategic business development in European Union organizations and client servicing. Suchit a world class MBA from Hochschule Nürnberg, Germany and a Masters in IT from Jamia
05-20-2008 | Leisure, Entertainment, Miscel …
SkatMedia
ISPA – German Masters 2008
Magdeburg – Over the long weekend of the 4. Mai more than 1.000 Skat players filled the Mittelland hall in Barleben. The tournaments of the 30. German Mastery and the 27. open International German Single Mastership were held by the International Skat Players Association, ISPA Germany. Patrons of the Games were the 1st Barleber Skat sports club e.V. and the Skat club \"Burger Ihleskater\", whose good organization together with the
Comments about openPR
We publish our press releases on openPR.de because we like people who are "open" - just like us.
Frank Obels, CEO, INCONET - Informationssysteme, Communication und Netzwerkberatung GmbH