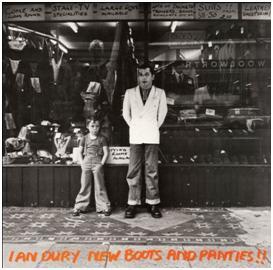 IAN DURY
NEW BOOTS AND PANTIES!!
Cat No: SVLP510
Barcode: 5052273005102
Release: May, 2011
180 gram Vinyl
Simply Vinyl are extremely proud to present on 180 gram vinyl for the first time in many years the classic debut album by Ian Dury ‘New Boots And Panties!!’
An unlikely pop star, physically disabled by childhood polio, and after a number of years in the less successful pub rock band Kilburn & The Highroads’, at the age of 35 Ian Dury took the charts by storm in October 1977 with his debut solo album on the infamous Stiff label: ‘New Boots And Panties’. With no hit single to drive it, almost unbelievably ‘NB&P’ peaked in the Top 5 of the albums chart. Even Dury’s famous single ‘Sex & Drugs & Rock & Roll’ (which failed to hit the Top75 Singles Chart) was not included.
This album remains one of the most essential to emerge from the punk era, infused with Dury’s famous wit and wordplay. Dury went on to have a number of hit singles and albums and continued recording until his death in May 2000.
The sleeve is the iconic photo shot of Dury and his young son Baxter leaning on the window of a lingerie shop in London.

Side A
1. Wake Up And Make Love With Me
2. Sweet Gene Vincent
3. I’m Partial To Your Abracadabra
4. My Old Man
5. Billericay Dickie
Side B
1. Clever Trever
2. If I Was With A Woman
3. Blockheads
4. Plaistow Patricia
5. Blackmail Man

Simply Vinyl was originally established in 1997 in response to the declining availability of the vinyl lp records on both new and classic back catalogue Rock/Pop titles. Only the highest quality of 180 gram virgin vinyl is used for our exclusive vinyl LP records titles, packaged with love and care into 350 gram durable sleeves. Simply Vinyl has been relaunched and revitalised under new ownership in 2010 and has big plans for 2011 and beyond

We endeavour to source and produce vinyl LP records, both recommended and exclusive, that will bring immense satisfaction and pleasure to our growing customer network. The atmospheric analogue sound created from our vinyl LP records is the hallmark of our quest for quality and the nearest thing to the live performance.

You can edit or delete your press release IAN DURY'S , NEW BOOTS AND PANTIES!! here

04-11-2016 | Business, Economy, Finances, B …
Wine-Stocks AG
Wineauction WineBid 6 April 2016 Results and Analysis
WineBid Wine Auctions 6 April 2016 As always a lot of wine lovers from all over the world took part on this online wineauction. Wine-Stocks listed 2324 different lots, a tradingvolume of more the 3562 bottles was achieved, mixed lots excludet. The volume in money was $ 309741.70, the average bottle value was $ 87,20. More then 50 wine price records were achieved Top 10 Coche Dury Puligny Montrachet Enseigneres 1996 750ml $ 597
04-04-2016 | Business, Economy, Finances, B …
Wine-Stocks AG
Hart Davis Hart Wine Auction Chicago 2016-04-02
The excitement of this day let himself already seen in the wine tasting. Only after closing the doors closed and selling the first lots, the accumulated tension solved.The trading day of Hart Davis Hart Wine Auction on 2016-04-02 invites interested investors worldwide. In the wine database of Wine-Stocks more then 1716 different lots were saved. A trading volume of 9451 bottles, without mixed lots, was counted. The sold wine price
03-23-2016 | Business, Economy, Finances, B …
Wine-Stocks AG
Kl-Wines Wine Auctions 21 March 2016 Results and Analysis
Kl-Wines Wine Auctions 2013-03-21 777 Lots and 2198 bottles were listed on Wine-Stocks databases The largest portion of the total amount at the trading day, got wineries from wine US-California,761 bottles or converted 35,81 %. Bertheau Pierre from Burgundy found the greatest demand from the wine collectors . 2,02 % or 43 wine bottles of total offers, were auctioned from this winery. The most wanted single wine was the Germain H, with a
03-22-2016 | Business, Economy, Finances, B …
Wine-Stocks AG
Delighted Smiles Flits Many Faces
The wine trading day at Bruun Rasmussen Wineauctions Kobenhavn ends with great success. Bruun Rasmussen Wineauctions offered more then 191 extraordinary lots of wines, excluding mixed lots. The room, was made up for the illustrious bidders from around the world. The bidders conquered the auction room, to follow the long and very extensive wine auction. Everybody was happy and the results has were more than impressive. 15 New Wine Price Records were listed
03-21-2016 | Business, Economy, Finances, B …
Wine-Stocks AG
The lightness of being becomes more valuable
The best wines of the Burgundy wine region, are going to develop into drinkable gold. Some wines of Domaine Romanee Conti are already worth, its weight in gold. The ounce of gold (ca. 31 gram ) costs around the $ 1200 at the moment. Therefore cost 750 grams of gold about $ 30,000. Domaine de la Romanee Conti, Romanee Conti, 750ml, vintage 1945 has a minimum value of $ 32,000 today. The vintages 1911,1919,1934,1945,1969 and
09-20-2013 | Business, Economy, Finances, B …
Mycyberhosting
Qualitative & Highly Cost-Efficient Dedicated Server Hosts Launched By MyCyberHo …
MyCyberHosting, needless to say has always offered its customers with first class and affordable Dedicated Server Hosts. However with the recent launch it has not only come up with highly enhanced and potential Windows Dedicated Server but the latest range is more cost efficient in terms of rates. The customer’s preference and raging demand for its Windows Dedicated Server has motivated MyCyberHosting to offer highly cost competitive Dedicated Server Hosts
Comments about openPR
I can't but agree to the positive statements about your portal: easy to use, clear layout, very good search function, and quick editing!
Jens O'Brien, Borgmeier Media Communication