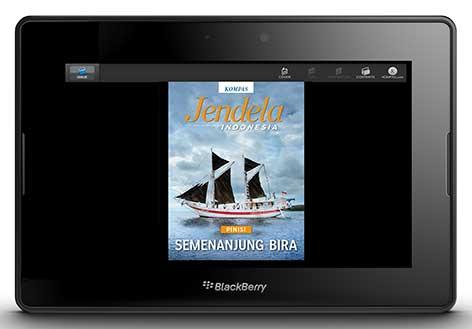 Kompas Daily, winner of the Silver Award in the tablet category of WAN-IFRA´s Asian Digital Media Award 2010, is now publishing content both on Apple´s iPad and RIM´s new BlackBerry PlayBook tablet device. The team behind Indonesia´s largest newspaper publishes its Editor´s Choice using WoodWing´s multi-platform Tablet Publishing Solution. The PlayBook app of Kompas Editor´s Choice is available for download from RIM´s BlackBerry App World™.Kompas began by bringing its weekly digital-only supplement Jendela to the PlayBook, and will soon start to publish the daily editions of its Kompas Editor´s Choice to RIM´s new tablet. Jendela spotlights Indonesia and its different cultures and cities through photos and videos. The app of Kompas Editor´s Choice for the PlayBook offers the same high-quality journalism in news, stories, high-resolution photos and videos as on the iPad.The content is efficiently created using WoodWing´s Tablet Publishing Solution – the same solution used for the creation of the iPad edition of Kompas Editor´s Choice – and displayed through WoodWing’s new Reader App for the BlackBerry PlayBook.“We aim to provide the best tablet media experience for our readers, regardless of the platform they are using,” said Rikard Bagun, Editor-in-Chief of Kompas. “We paid close attention to how we can digitally enhance our newspaper and brought that to the BlackBerry PlayBook tablet.”“Kompas has proven again to be at the forefront of adapting new media channels,” said John Fong, CEO of Serious Technology, one of WoodWing´s Gold Authorized Solution Partners in Asia. “One of the main differences between the two tablet platforms is the different screen ratios of the devices – 16:9 for the PlayBook versus 4:3 for the iPad. With WoodWing´s multi-screen-enabled Tablet Publishing Solution, we can easily create the content for both platforms using a single master template to gain efficiency and achieve consistency.”“It´s one of the pillars of our tablet strategy that we support new platforms as soon as they become relevant for publishers,” said Hans Janssen, CEO of WoodWing Software. “Given the statements of analysts who forecast sales of up to seven million units by the end of 2011, this certainly is the case for RIM's PlayBook.”About Serious Technology Serioustec comprise of passionate individuals who believe in what they do. We focus on digital online and offline publishing solutions ranging from web, print, iPad to mobile platform. Working with ADOBE and WoodWing, we are the market leader in editorial and publishing solution in Asia.Serious Technology Sdn Bhd Level 36, Menara Citibank Jalan Ampang 50450, Kuala Lumpur MALAYSIA contact@serioustec.net