Kompas is the First Daily Newspaper in Asia on the iPad 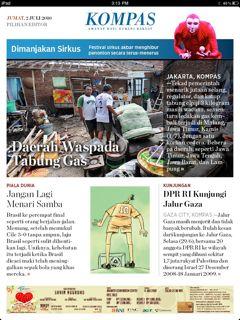 Kompas, the largest daily newspaper in Indonesia, uses WoodWing´s Digital Magazine Tools to publish daily issues on the iPad. Kuala Lumpur, Malaysia – Serious Technology, the leading technology provider to the publishing industry in Southeast Asia and WoodWing Software, a leading supplier of innovative cross-media publishing solutions, is continuing its push to enable publishers to tap the iPad as the most innovative digital publishing channel. WoodWing announced today that Kompas, the largest daily newspaper in Indonesia, is using WoodWing´s Digital Magazine Tools to create and publish its digital issues for the iPad. The App has been available in the App store since July 2, 2010. "At Kompas, we always aim to offer our audience the most compelling reader experience and to provide them with the latest news wherever they are and whatever device they use. It was a logical step for us to support the iPad", said Rikard Bagun, Editor in Chief at Kompas. The Kompas iPad App is produced by six employees working parallel with print production. The team aims to output the App at 2 a.m. local time every day, enabling users around the world to read the latest Kompas iPad issue in a timely manner. Kompas was founded in 1965. Published every day, the respected newspaper reaches more than 2 million readers per day. Its Web site www.kompas.com has a total readership of 15 million unique visitors per month and it’s one of the largest news portals in Indonesia. Kompas is the most innovative publishing group in Indonesia, being the first to consistently introduce technologies, such as QR-Code in daily editorial content, Augmented Reality for editorial and advertising, Web digital replica in Kompas ePaper, and now the iPad App. Daily newspapers can capitalize on the iPad Remco Koster, Managing Director of WoodWing Asia Pacific, said, "We are very happy to enable Kompas to be the first Asian daily newspaper available for the iPad. The iPad initially focused on the magazine segment, but now we see that daily newspapers can also capitalize on the iPad to broaden their daily audience, and to develop new revenue sources. Kompas wanted their daily digest on the iPad to have a magazine look and feel. With our tools, newspaper publishers can do both – create a digest in a magazine style or keep the appearance of their printed newspaper.” John Fong, CEO of Serious Group, said: “Although producing a daily iPad newspaper with a magazine look and feel may seem quite labor-intensive, we proved this is very easily achieved using WoodWing’s solution, InDesign templates and smart automation tools. Kompas clearly leads the way again for publishers in Asia.” About Serious Technology Serioustec comprise of passionate individuals who believe in what they do. We focus on online and offline publishing solutions ranging from web, print to mobile platform. Working with ADOBE and WoodWing, we are the market leader in editorial and publishing solution in South East Asia. Serious Technology Sdn Bhd Level 36, Menara Citibank, 165, Jalan Ampang, 50450, Kuala Lumpur, Malaysia