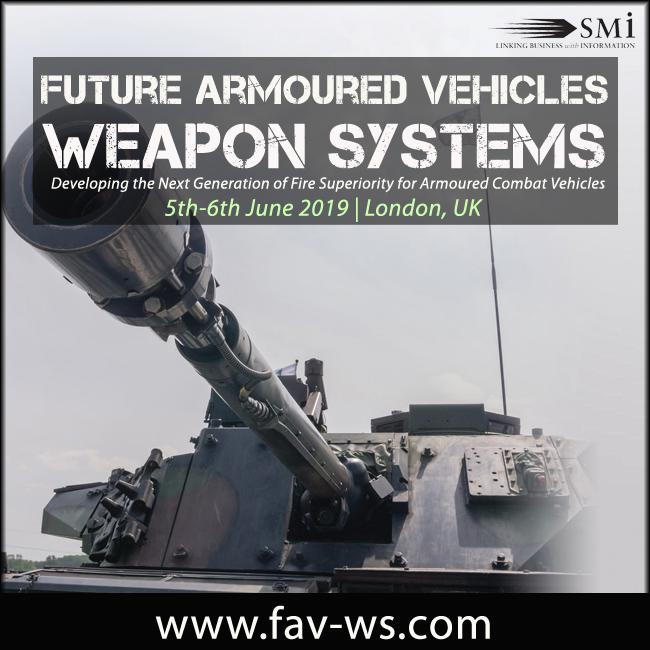 SMi reports: Experts will be presenting on the platforms and their lethal capabilities at the Future Armoured Vehicles Weapon Systems Conference in London, this June

SMi's Future Armoured Vehicles Weapon Systems Conference will take place on the 5th and 6th June 2019 in London, UK. At the conference, experts from the most forward-thinking nations will provide detailed analysis and an overview of cutting-edge weapon and large calibre ammunition systems, and how they are revolutionising mounted close combat lethality.

With only 6 weeks remaining, it is advised to register soon to guarantee a place. Register at http://www.fav-ws.com/openpr

The featured platforms and their lethal capabilities discussed this year includes the JAGUAR, ABRAMS, ALTAY and M60T:

The JAGUAR will be presented by Captain Nicolas Sallien, Technical Manager Jaguar, DGA and Mr Florian Wiss, Fire Support Manager of JAGUAR Vehicle, DGA. The presentation will be on ‘A Technical Assessment of JAGUAR Integrated Weapon Systems Capabilities’, with a focus on:

The ABRAMS will be presented by Lieutenant Colonel Ken Bernier, Product Manager for Abrams Main Battle Tank, US Army. The presentation will be on ‘Maintaining Strike Superiority for the Abrams Main Battle Tank Through Effective Modernisation’, with a focus on:
• Ensuring lethality overmatch for the Abrams: outgunning and outranging near peer adversaries through modernisation
• Increasing probability of first time hit and reducing time to kill: Laser range finders and increasing accuracy
• Developments in technology to increase the impact of the 120mm rounds and advanced multi-purpose rounds
• Further upgrades for the Abrams: Increasing firepower and battlefield superiority in the future

The ALTAY will be presented by Undersecretariat for Defence Industry (SSB) (speaker details to follow). The presentation will be on ‘Novel Approaches to the Requirements of the Combat Zone “ALTAY Main Battle Tank Program’, with a focus on:

The M60T will also be presented by Undersecretariat for Defence Industry (SSB) (speaker details to follow). The presentation will be on ‘Modernization of the M60T main battle tank within the FIRAT Project’, with a focus on:

• An overview of where development is needed to meet the asymmetric operational demands of the tanks that were joined the Operations
• Combat proven capabilities of the FIRAT-M60TM (Turkish Modernization) Upgrade Package which enhances survivability and lethality aspects of the platform
• Providing the M60TM the ability to fire smart tank ammunition
• Integration of SARP Remote Weapon Station System to improve lethality in urbanized terrain
• Future development Priorities: Exploring new digital fire control systems to maximize firepower of Light & Medium & Heavy Tanks

The event brochure with the full agenda and speaker line-up is available to download online at http://www.fav-ws.com/openpr

For details on tailored sponsorship and branding packages, please contact Justin Predescu on: +44 (0) 20 7827 6130 or email: jpredescu@smi-online.co.uk

--------END--------
About SMi Group:
Established since 1993, the SMi Group is a global event-production company that specializes in Business-to-Business Conferences, Workshops, Masterclasses and online Communities. We create and deliver events in the Defence, Security, Energy, Utilities, Finance and Pharmaceutical industries. We pride ourselves on having access to the world’s most forward thinking opinion leaders and visionaries, allowing us to bring our communities together to Learn, Engage, Share and Network. More information can be found at http://www.smi-online.co.uk

You can edit or delete your press release Discover the lethal capabilities of the JAGUAR, ABRAMS, ALTAY & M60T platforms at Future Armoured Vehicles Weapon Systems 2019 here

10-20-2020 | Associations & Organizations
SMi Group
Border Security 2021 turns into a Virtual Conference
SMi Group reports: The Border Security conference taking place next February will no longer take place in Prague and will now be a virtual event. In light of on-going developments with COVID-19, SMi Group have decided to move its 14th annual Border Security conference, taking place on the 10th-11th February 2021, to a fully online, virtual experience. SMi Group’s virtual conference platform will enable attendees to: • Create their own virtual profile • Connect with
10-08-2020 | Associations & Organizations
SMi Group
Boeing sign up to sponsor the Virtual Military Airlift and Air-to-Air Refuelling …
SMi Group Reports: Boeing is the latest sponsor to confirm their attendance at the Military Airlift and Air-to-Air Refuelling Conference in December SMi Group are delighted to announce Boeing have now signed up to sponsor, speak and exhibit at the virtual 21st Annual Military Airlift and Air-to-Air Refuelling Conference, taking place on the 1st-2nd December 2020. Boeing is the world's largest aerospace company and leading manufacturer of defense, space and security
06-25-2020 | Health & Medicine
SMi Group
Registration opens for SMi’s 4th Annual Ophthalmic Drugs Conference
SMi reports: Registration is now open for the 4th annual Ophthalmic Drugs Conference, taking place in London on the 23rd-24th November 2020. SMi presents the 4th Annual Ophthalmic Drugs Conference taking place on the 23rd-24th of November 2020, in London. The global ophthalmic drug market is forecast to surpass $60 billion USD by 2025 with increasing focus from the industry on alternative delivery approaches and improving the effectiveness of the current repertoire
06-22-2020 | Associations & Organizations
SMi Group
US Air Force to Present Briefing on New PNT Constellation, NTS-3, at Military PN …
The US Space Force's new PNT constellation, Navigation Technology Satellite 3 (NTS-3), is designed to provide resilience to Global Navigation Satellite Systems by bringing online the M-Code, a long-delay signal that's more resilient to jamming. Not only is NTS-3 able to resist jamming, but its satellites can also be redeployed to provide coverage where it’s most needed. Currently being built by L3Harris under an $84 million contract, the constellation is expected