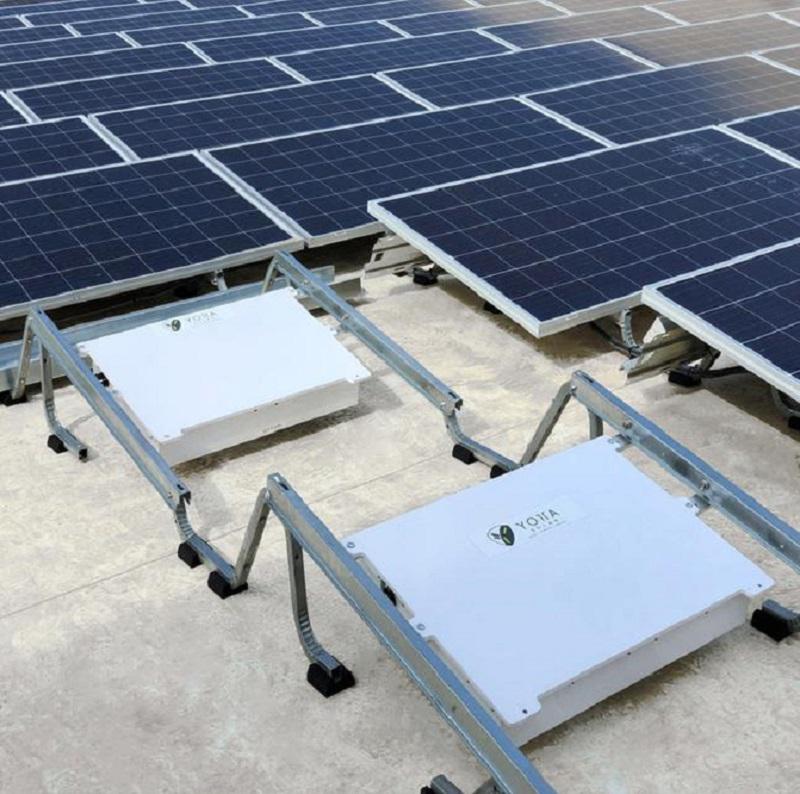 New lithium-ion battery energy storage modules integrated with individual solar racking systems and PV panels can reduce the costs of commercial, rooftop solar-plus-storage energy installations (100 kW-500 kW) an average of 40 percent, according to Yotta Solar, developer of the SolarLEAF.Yotta Solar and PanelClaw, a leader manufacturer and vendor of flat-roof solar energy racking systems, recently announced that the latter would integrate SolarLEAF as an attachment to its rooftop racking solutions. “PanelClaw’s flat roof racking systems will come pre-engineered and fully equipped for the SolarLEAF™ attachment, making the addition of energy storage simple for solar developers and utilities by eliminating the design and site-specific complexities that come with centralized storage,” according to a press release.Developed over the course of three years by researcher Vikram Iyengar and Yotta Solar co-founder and CEO Omeed Badkoobeh, each SolarLEAF consists of a 1-kWh lithium-iron-phosphate (LiFEPO) battery with built-in solar energy optimization, Badkoobeh explained in an interview. “The demand for cost effective energy storage is rapidly growing and will be critical to the future growth of solar. We created the SolarLEAF™ to make adding energy storage seamless for solar developers and utilities by eliminating the design and site-specific complexities that come along with centralized storage,” Badkoobeh said for the press release.Yotta Solar’s SolarLEAFSolarLEAFs can store and then dispatch electricity for a period of four hours when paired with a standard 60-cell or 72-cell PV module, according to Badkoobeh. Furthermore, “SolarLEAF’s proprietary architecture allows installations to be scaled to any system size with an appropriately paired inverter. This is the highest possible efficiency architecture since DC solar charge the DC battery and is only converted to AC once as needed by a shared inverter,” Badkoobeh told Energy Central.Proprietary thermal energy regulation boosts the output, overall performance and life of SolarLEAFs by buffering high heat during mid-day hours, then passively cooling when temperatures drop later in the day. The system also protects batteries against low temperatures below freezing, according to Badkoobeh.The actual cost savings resulting from installing a SolarLEAF system as opposed to a containerized BESS will vary according to any given installation’s complexity, scale and location, among other factors, Badkoobeh pointed out. Nonetheless, reducing the costs of an average residential or small commercial rooftop solar PV system by as much as 40 percent would be a huge accomplishment that could boost the adoption of distributed solar-plus-storage significantly. “We do this by avoiding cranes, real-estate value loss, trenching and fire suppression systems, and it can be installed by the same PV crew on a project,” Badkoobeh explained.Battery energy storage-solar racking system integrationIntegrating battery energy storage modules at the individual solar panel level makes for a substantially smaller physical footprint as compared to standalone, containerized battery energy storage systems (BESS). SolarLEAF reduces rooftop solar project and operational costs by eliminating the need for HVAC and fire suppression systems required by other battery technologies, according to Yotta. “It also lowers expensive shipping costs associated with heavy ballasts and centralized energy storage systems.The partnership with PanelClaw could provide a big boost in terms of SolarLEAF’s adoption. PanelClaw has installed more than 1.3 GW of flat-roof solar PV racking systems around the world, more than 100 MW of the total in Europe, according to the company, and Yotta has a full team of manufacturing engineers working to increase production capacity of SolarLEAFs, Badkoobeh said in the interview.“The SolarLEAF can offset the need for concrete ballasts, something installers hate dealing with. PanelClaw is a market leader in this segment and is at the forefront of testing, reliability, and regulations. This innovation will allow both parties to capture greater market share in the growth of commercial solar,” he explained.Calculate your LCOE with sidecosts here http://www.pv4.eu/panel-level-battery-integration-holds-out-promise-of-40-percent-reductions-in-solar-plus-storage-installation-costs_1900.htmlen françaishttp://www.photovoltaique-solair-echange.fr/lintegration-de-la-batterie-au-niveau-des-panneaux-laisse-presager-une-reduction-de-40-des-couts-dinstallation-du-stockage-solar-plus_175.htmlin Germanhttp://www.photovoltaik4.de/batterie-integration-auf-panel-ebene-verspricht-einsparungen-von-40-prozent-bei-solar-plus-speicher_639.htmlPhotovoltaic Think Tank Non Profit Photovoltaic News Free PV Project Exchange CTO: Thomas Karl ReisThrough a family business founded in 1985, I have been working independently with subsidiaries companies, for over 20 years in the field of computer science and renewable energies. Even as a child, I was fascinated by the family's small hydropower plant in Styria and since then I have been in flames for sustainable solutions.PV4.eu Photovoltaic for Europe Sieveringerstrasse 28 A-1190 Vienna info@pv4.eu +43 2252 256 361

04-21-2020 | Energy & Environment
Photovoltaic for Europe
TOP 5 Most Efficient Commercial Available Solar Panels March of 2020
he photovoltaic industry has made tremendous progress and is the cheapest way to build new electricity production capacity worldwide. Another positive feature is that photovoltaics produce no emissions. Finally, the danger of fine dust as a possible intensifier of the course of a coronavirus disease has also caught the attention of the media. ? We should focus much more on resilient and decentralized solar energy, also to improve the health, living conditions and financial
03-12-2020 | Energy & Environment
Photovoltaic for Europe
Calculate Corona doubling by yourself
"The greatest weakness of humanity is its inability to understand the exponential function," said physicist Al Bartlett in his book "The Essential Exponential!" written. For Example there are 112 (known) corona cases in Austria today and the rate of duplication (outside of China) is 4 days. So could there be 1 million cases in Austria in just over a month? Do the calculations yourself with this doubling calculator: http://www.pv4.eu/calculate-corona-doubling-by-yourself_2048.html But you can use
01-17-2020 | Energy & Environment
Photovoltaic for Europe
Ski Lift can run on photovoltaic electricity of the summer
“In summer, weights are transported up the mountain and left in the valley in winter, and the photovoltaic energy of summer is available in dark winter.” Bill Gates explained his investment in lift or gravitational energy storage technology in a similar way. Batteries are getting cheaper and cheaper and will soon offer a cheap, short-term solution for storing energy for daily energy needs. However, the long-term storage capacity of batteries, for example
12-13-2019 | Energy & Environment
Photovoltaic for Europe
Are rare earths used in Solar Panels and Batteries
According to a report by ADEME , the earths are not so rare. Especially in photovoltaic or solar energy and battery technologies are not widely used. Despite their name, they are not that rare. The rare earth consumption in the area of ​​the generation of renewable energies is mainly due to the use of permanent magnets for offshore wind energy, which are only used by a small part of the wind