Harvesting drinking water from the air with the power of space 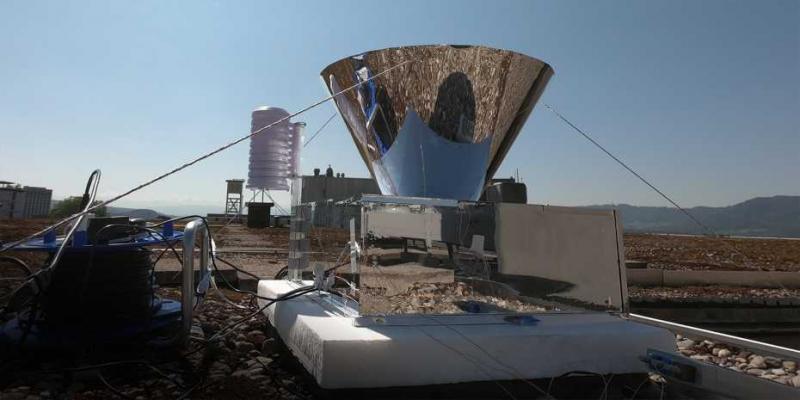 Obtaining fresh drinking water from the air has been very energy intensive for a long time. Researchers at ETH Zurich have now invented a current less technology that uses the cooling of space for this.The new device essentially consists of a specially coated pane of glass that both reflects solar radiation and radiates its own heat into space via the atmosphere. As a result, it cools down to 15 degrees Celsius below the ambient temperature. On the underside of this disk, water vapor from the air condenses to form water. I have published a dew point calculator http://www.pv4.eu/harvesting-drinking-water-from-the-air-with-the-power-of-space_2284.html for this.The Swiss researchers want to bring this technology to the south. It would be ideal to propagate such radiative cooling. So not only fields could be irrigated with water. At the same time, the fields could be cooled by up to 15 ° C, thus ensuring a good harvest. The heat stress is already causing enormous crop failures.It’s also a bit of a moral obligation, because our wealth also comes from burning fossil fuels. However, the rising temperatures are increasingly affecting the poorer south. These radiation coolers represent a CO2 compensation, as the effect of the CO2 can be compensated in this way.Relieving women from the burden of collecting water by providing a faucet for every household could enable them to contribute 122 million additional working days per year to the global economyWomen and girls can also benefit from this, as drinking water often involves a considerable amount of work in the south. Making southern communities resilient to heat waves and slowing down refugee movements has tremendous benefits, and one dollar invested in water resilience can translate into a return of $ 21, as detailed in the FT article .If you would like to support this and other solar radiation management techniques, please contact me http://www.pv4.eu/harvesting-drinking-water-from-the-air-with-the-power-of-space_2284.htmlPV4.eu Photovoltaic for Europe Sieveringerstrasse 28 A-1190 Vienna info@pv4.eu +43 2252 256 361Through a family business founded in 1985, I have been working independently with subsidiaries companies, for over 20 years in the field of computer science and renewable energies.Even as a child, I was fascinated by the family's small hydropower plant in Styria and since then I have been in flames for sustainable solutions

11-16-2020 | Energy & Environment
Photovoltaic for Europe
Create your Green Bond or Crowdfunding for free
For me social Photovoltaics is very exciting. Imagine you are struggling to afford electricity bills and the power of sun helps you, so the grid provider can hardly cut you off. So in the current situation everybody wants to save money.  Most people will rush to switch to the cheapest Electricity Provider and the cheapest Option these Days is the Sun. Even the International Energy Agency tells us these days that photovoltaics
04-21-2020 | Energy & Environment
Photovoltaic for Europe
TOP 5 Most Efficient Commercial Available Solar Panels March of 2020
he photovoltaic industry has made tremendous progress and is the cheapest way to build new electricity production capacity worldwide. Another positive feature is that photovoltaics produce no emissions. Finally, the danger of fine dust as a possible intensifier of the course of a coronavirus disease has also caught the attention of the media. ? We should focus much more on resilient and decentralized solar energy, also to improve the health, living conditions and financial
03-12-2020 | Energy & Environment
Photovoltaic for Europe
Calculate Corona doubling by yourself
"The greatest weakness of humanity is its inability to understand the exponential function," said physicist Al Bartlett in his book "The Essential Exponential!" written. For Example there are 112 (known) corona cases in Austria today and the rate of duplication (outside of China) is 4 days. So could there be 1 million cases in Austria in just over a month? Do the calculations yourself with this doubling calculator: http://www.pv4.eu/calculate-corona-doubling-by-yourself_2048.html But you can use
01-17-2020 | Energy & Environment
Photovoltaic for Europe
Ski Lift can run on photovoltaic electricity of the summer
“In summer, weights are transported up the mountain and left in the valley in winter, and the photovoltaic energy of summer is available in dark winter.” Bill Gates explained his investment in lift or gravitational energy storage technology in a similar way. Batteries are getting cheaper and cheaper and will soon offer a cheap, short-term solution for storing energy for daily energy needs. However, the long-term storage capacity of batteries, for example

03-25-2021 | Science & Education
Gas Sensing Solutions (GSS)
CO2 Sensor Response Time from GSS
GSS offer CO2 sensors with different gas sampling methods. The gas is either diffused into the measurement chamber typically through a PTFE membrane, or pumped into the chamber using a flow through adaptor. Apart from some gas flow around the sensor, the response time of diffusion sensors is dominated by the digital filter setting and the pore size of the membrane filter. Diffusion sensors are used for applications that do not
07-16-2020 | Science & Education
Gas Sensing Solutions (GSS)
Minimising CO2 Sensor Power Consumption
All GSS sensors use a technique called non‐ dispersive infra‐red (NDIR) sensing where light is injected into the optical measurement chamber, which contains the gas of interest. The light that passes through the optical cavity is detected by the photo diode. The signal from the photo‐diode is digitised by the microcontroller and compared with a reference level stored in memory. The microcontroller can then calculate the level of CO2
02-25-2020 | Science & Education
Biofaction KG
Bacteria as CO2 recycling powerhouse
E. coli can live and feed on formate & methanol: Scientists from the Max Planck Institute (Germany) have reached a significant breakthrough presented in their recent Nature Chemical Biology publication. Their research for EU project eForFuel has redesigned the model biotechnological bacteria Escherichia coli (E. coli) to live and feed on methanol and formate: a possibility that serves as a stepping stone towards future endeavors aiming at recycling CO2 into various
02-20-2020 | Health & Medicine
Data Bridge Market Research
Global Transcritical CO2 Market |
Data Bridge market Research has released a new report on Global Transcritical CO2 Market which incorporates a thorough assessment of overall Global Transcritical CO2 Market The report provides a detailed competitive analysis which includes the profiles of key market players and organizations and their working strategies. The report consists of essential data and information about the concerned Global Refinished Paint Market. For better understanding complex Global Transcritical CO2 Market data
07-31-2018 | Industry, Real Estate & Constr …
Beer CO2 Regulator Market
Global Beer CO2 Regulator Market | 2018 Key Vendors: Taprite, Titan Controls, Pr …
Qyresearchreports include new market research report “Global Beer CO2 Regulator Market Research Report 2018” to its huge collection of research reports. This report on the global Beer CO2 Regulator market is based upon thorough study conducted by some of the professional and expert analysts of the industry. This report emphasizes on several factors including government regulations that are influencing growth of the market positively or negatively. The report explains challenges, opportunities,
01-19-2018 | Industry, Real Estate & Constr …
E+E Elektronik Ges.m.b.H
CO2 Probe Resistant to Hydrogen Peroxide
The digital EE871 probe from E+E Elektronik measures CO2 concentrations up to 50,000 ppm (5 % CO2). The compact probe is now available with a special filter cap which, ensures high accuracy and long-term stability in H2O2 contaminated environment. This opens up new applications for the EE871, particularly in the pharmaceutical and biotech industries, where hydrogen peroxide is used for cleaning and sterilization purposes. The EE871 is a high accuracy
Comments about openPR
OpenPR ist the nicest and most clearly laid out PR platform I have seen to this day. The press releases are displayed very nicely and clearly and without any unnecessary frills. The updates are fast and the finished release looks appealing and is clearly legible. Even with 16 years of experience one discovers new things from time to time. Congratulations!
Gabriele Ketterl, Director Marketing & PR, Menads