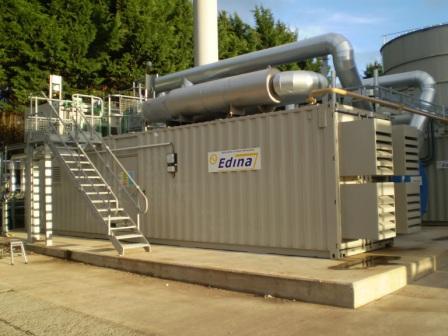 Mannheim, April 15, 2011 Edina UK, distribution partner of MWM in the United Kingdom, has had a year of major successes in supplying gas-powered generators from Mannheim-based MWM GmbH to the UK Water Utility industry, concluding a multi-year contract with Anglian Water, and numerous projects for Welsh Water, two important UK water suppliers.The order for Welsh Water comprises the delivery of complete container gensets for four large Advanced Thermal Digestion projects at Eign, Wrexham, Cardiff, and Afan, with a total generator output of more than 10.2 MWel.Edina UK received the second order for power generation from sewage gas from Anglian Water under the AMPS5 program. The contract provides for the supply of container gensets over a period of five years. The first six were commissioned in early 2011.MWM is the world's oldest manufacturer of gas-powered generators whose innovative gas engines are noted for their high-efficiency, proven reliability and low maintenance, two features that make them a highly profitable solution. The Edina Group has an enviable track record in design, construction, and long-term operation of gas engines powered by various types of gas, including sewage gas. The company plays a key role in the development of renewable and sustainable energy sources to reduce dependence on fossil fuels.The long-established company MWM in Mannheim, Germany, is one of the world's leading system providers of highly efficient and eco-friendly complete plants for decentralized power supply with gas and diesel engines. For 140 years the company has stood for the reliable, uninterrupted provision of electricity, heat and cooling at all times and at any location. MWM has 1,200 employees around the globe.MWM GmbH Frank Fuhrmann, Head of Communications & PR Carl-Benz-Strasse 1 68167 Mannheim Germany frank.fuhrmann@mwm.net

10-08-2013 | Energy & Environment
MWM GmbH
Name change: MWM GmbH to become Caterpillar Energy Solutions GmbH
Mannheim, October 08, 2013 | On November 1st, MWM GmbH will change its name to Caterpillar Energy Solutions GmbH. The name change solely affects the legal entity, the established MWM brand is being continued. This step underscores MWM's belonging to the global company Caterpillar. Caterpillar is the world's leading manufacturer of construction and mining equipment, diesel and natural gas engines, industrial gas turbines and diesel-electric locomotives. Two years ago, MWM, the
01-24-2013 | Energy & Environment
MWM GmbH
MWM Asia Pacific receives the 2012 Singapore HEALTH Award in Bronze
Mannheim, Jan. 10, 2013 / At the end of November 2012 MWM Asia Pacific Pte. Ltd. received the Singapore HEALTH 2012 bronze health award. The MWM subsidiary received this important award, which is granted in platinum, gold, silver and bronze, for its exemplary dedication to promoting workplace health. The Singapore HEALTH Award is presented every two years by the Singapore government’s Health Promotion Board to give recognition to companies,
06-11-2012 | Energy & Environment
MWM GmbH
Cogeneration at Düsseldorf International Airport: Reliable energy for the futur …
Germany’s energy policy shift away from nuclear energy in mid 2011 means that the share of renewable resources it uses to generate electric power will increase to 35% by 2020. This can be accomplished through a combination of measures including the increased use of cogeneration. The reason: Natural gas-fired plants that produce both heat and electricity and that are used in combination with heat storage equipment may be just the
03-03-2012 | Energy & Environment
MWM GmbH
The MWM model series – innovation and constant development
Mannheim, March 1, 2012 | After two years of constant development, the new version of the TCG 2032 (the largest MWM genset) was launched in January 2012. Optimized spark plugs and turbocharger technology have resulted in electrical efficiency of up to 44.2% with an output of 3,333 to 4,3000 kWe (in the V12 and V16 cylinder versions). Thanks to excellent operational experience, the period of operation up to the major