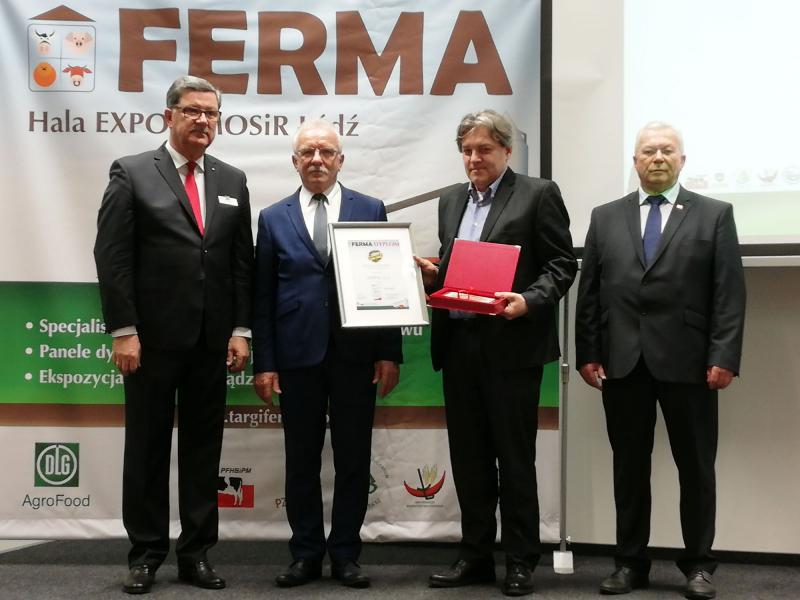 Dr. Andrzej Sobieraj (2nd on the right) accepting the prize in Lodz.

This year's visit to the FERMA trade fair was crowned with shining success for Leiber GmbH and its Polish daughter company - Leiber Sp. z. o.o. based in Krosniewice. This year, the animal feed department with its brewers' yeast range was, once again, represented at the fair in Lodz. FERMA is regarded as the international trade fair and platform for producers and breeders of livestock, pork and poultry in Poland. A commission consisting of members of the Polish Chamber of Agriculture, scientists and a representative of the fair organisation, awarded medals to two of Leiber brewers' yeast products. The new product Leiber YeaFi® AB, a mixed product consisting of brewer's yeast compounded with apple pomace and beet pulp, was awarded a prize as an "innovation" on account of its high content of active fibres for the support of the digestion by the animals. During the development of the product, special attention was given by Leiber to the grain-free composition, as the animal feed industry and animal owners have increasingly demanded this in recent years.The second product that was awarded the "gold medal" was Biolex® MB40, a specialist brewers' yeast product from the Leiber animal feed range. It consists of the cell walls of genuine brewer's yeast (Saccharomyces Cerevisiae), which are obtained during the production of soluble brewer's yeast extracts. Its high levels of beta-glucans and mannan-oligosaccharides, for example, actively support and relieve the immune system, and bind and inactivate pathogens and toxins in the gut. Both Andrzej Sobieraj on behalf of the Polish subsidiary and the director of the business unit for animal nutrition, Nikolaus Jungbluth are delighted with the awards.For more than 60 years, Leiber GmbH has been one of the leading manufacturers of special yeast products “made in Germany”. With its two locations in Germany, as well as additional production facilities in Poland and Russia, Leiber’s more than 230 dedicated employees produce brewers’ yeast products and yeast extracts at the highest level of qualityLeiber GmbH Karen Mörler Hafenstraße 24 49565 Bramsche Telephone: +49 (0) 5461 / 9303-0 Fax: +49 (0) 5461 / 9303-29 info@leibergmbh.de leibergmbh.de

03-14-2019 | Business, Economy, Finances, B …
Leiber GmbH
Leiber YeaFi® – The Yeast Fibre Concept!
Leiber GmbH has expanded its product range in the area of combined yeast products and adjusted their feed to meet current market trends. For more than 60 years now, Leiber has been combining pure brewers’ yeast with functional fibre products such as brewers’ grains, malt sprouts or wheat germ in a manufacturing process they developed themselves to protect the nutritional ingredients in brewers’ yeast. For several years, the demand for
03-11-2016 | Business, Economy, Finances, B …
Leiber GmbH
Leiber GmbH further invests in R&D
Since February 2016, Leiber GmbH has been reinforced by Dr med vet Claudia Westfahl - a veterinarian specialized in animal nutrition - as part of the company's strategy to invest in new product developments. With the new position ‘Product Development Animal Nutrition’, Dr Westfahl is responsible for new product development in the field of functional feed ingredients for both pet as well as farm animals. After graduating at the University
05-15-2014 | Business, Economy, Finances, B …
Leiber GmbH
Leiber Subsidiary in Poland receives FSSC 22000 Certification
Leiber Sp. z o.o., the Polish subsidiary of Leiber GmbH, has successfully completed the FSSC 22000 Food Safety System Certification process. FSSC 22000, which is recognised internationally and also by the Global Food Safety Initiative (GFSI), was developed on the basis of the ISO 22000 Standard to define basic requirements for the certification of production processes within the food supply chain. Brewer’s yeast products are manufactured for the foodstuffs and
05-13-2014 | Business, Economy, Finances, B …
Leiber GmbH
Leiber GmbH expands international aquaculture business relationship
By signing the distribution contract between Leiber GmbH and the company PHARMAQ AS, headquartered in Norway, Leiber GmbH teams up with a further distribution partner in the growing markets of aquaculture and expands its existing business activities. PHARMAQ AS develops, produces and markets vaccines and health products for the global fish farming industry. Their customers are found in the salmonid, tilapia, pangasius, sea bass and bream segments. “Pharmaq provides an excellent

11-11-2020 | Energy & Environment
WINAICO Deutschland GmbH
WINAICO solar modules installed on 2 MW photovoltaic system in Poland
WINAICOs specialist partner Grodno S.A. realized this project as general contractor Creglingen, 11.11.2020 – The company Malow, one of the largest manufacturers of metal furniture in Europe, has opted for WINAICO solar modules when implementing a photovoltaic system. The project with a total capacity of 2 MW is located on the flat roof of the company headquarters in Suwalki and an open space in front of the company building. The entire
08-31-2020 | IT, New Media & Software
XTM International
XTM International unlocks the secrets of language translation with Inter-languag …
XTM International, developers of the XTM Cloud enterprise cloud-based translation management system (https://xtm.cloud/translation-management-system/), have just launched a new neural network-based technology called Inter-language Vector Space. This innovative AI-based technology works out the probability of target words and phrases being equivalent to source words and phrases. Regarded as the next big thing in the language AI area since neural machine translation, it is based on enormous amounts of Big Data for
02-13-2019 | Health & Medicine
Surgical Gowns Market
Global Surgical Gowns Market by Type and Top Key Players in 2025- Alan Medical, …
ResearchMoz include new market research report "Global Market Study on Surgical Gowns: Disposable Surgical Gowns Product Type Segment to Witness a CAGR of 6.0% During 2017–2025" to its huge collection of research reports. The global surgical gowns market is anticipated to grow consistently. This market is expected to show significant growth in the Asia Pacific region during the forecast period i.e., between 2017 and 2025. For the further development of the
11-01-2016 | IT, New Media & Software
Gamification Nation
International Award for Gamification Nation
At the Gamification World Congress, Gamification Nation’s recent recruit, Andrzej Marczewski, won the prestigious ‘Contribution to the Industry’ Award. The Gamification World Congress was held in Madrid, Spain, at the end of October. Andrzej won the award for his work with player types. This involved developing a questionnaire on player profiles, which was validated by researchers in the academic world. Nominations for this award included An Coppens, founder and CEO of Gamification
01-30-2008 | Arts & Culture
PPS
„Minimum-Maximum“ in the Gallery BWA Lublin/PL
Where blood and crude oil flow - Kurt Fleckenstein in the footsteps of minimal-art: Game of the Kings - blood and crude oil The renowned gallery BWA in Lubin is the art center of concretism in Poland. With the exhibition “Minimum-Maximum” the gallery director Andrzej Bielawsk wants to demonstrate that the genre of minimal art by far has has not come to an end but that the art of “achieving a
08-10-2007 | Business, Economy, Finances, B …
Purcon Poland
Poland needs specialists for its special situation
Almost three years after Poland joined the European Union, the dust is still settling on the country’s labour market, where radical change has created special challenges for the foreign investors who are looking to benefit from the booming economy, as well as for the companies that have already set up shop in the former communist land. One clear trend to emerge in the aftermath of EU accession, which prompted a flight
Comments about openPR
OpenPR is clearly structured and remains true to its principle of confining itself to the essential parts. OpenPR has proven to be a very good and reliable partner to our media agency: Within the shortest time the releases are online and go down well with the media representatives. The success of OpenPR is reflected in the steadily increasing number of press releases. It is good that OpenPR exists!
Ursula Koslik, Director Marketing & PR, F+W Hamburg