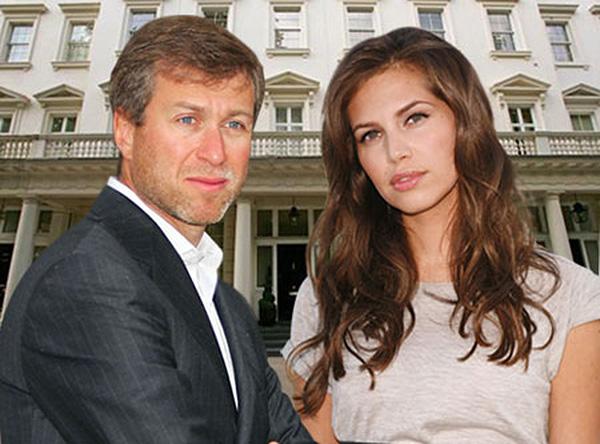 Roman Abramovich, the fifteenth richest man in the world, has splashed out £25 million (US$40.5 million) on a ‘stop gap’ home for him and his girlfriend, Dasha Zhukova, in one of London’s most up-market areas.The Grade 2 Listed building overlooks the River Thames near Battersea Bridge and is situated on Chelsea’s Cheyne Walk. The property features a fifty-foot long drawing room with high ceilings, nine bedrooms, ten bathrooms, a music room and parking for eight cars.The house was previously owned by the painter James Whistler, Nancy Mitford’s sister, Diana, and the late Tory minister, Paul Channon.Former guests include; Prince Charles and the Duchess of Cornwall, who celebrated the Duke of Kent’s 70th birthday at the property, The Queen and Mick Jagger. In fact, The Rolling Stones frontman once shared a home in Cheyne Walk with Marianne Faithfull and has recently moved back.However, there is one small drawback for the notoriously private Abramovich. The property was once part of Chelsea Manor House stands on the site of Sir Thomas Moore’s garden which is now owned by the National Trust.As a requirement of owning such an important building, Abramovich will have to forego his privacy because the National Trust regularly opens the entrance and its gardens to the public.One such occasion will be Open House London Day between 17th to 18th September when thousands of visitors are allowed access to historically significant properties throughout England.Visitors to Sir Thomas Moore’s garden will be able to easily look across at Abramovich’s private gardens and perhaps get a glimpse of his interior designs.The Russian billionaire, who is worth a reported £14 billion (US$22.6 billion), surprised estate agents by buying a home with so little privacy as Abramovich is clearly obsessed with security: his largest yacht, the 536 foot ‘Eclipse’, has a military grade missile defence system, bullet proof windows and armour plating around the master bedroom.Although it’s unlikely Abramovich will need to take such extreme measures in his new residence.The Chelsea Football Club owner bought the property to live in whilst his main home in Lowndes Square, London undergoes construction work.Such is the extent of the work, Abramovich will be living in his temporary home for at least three years.When the renovation work is complete, the eight bedroom mansion, which is spread across two stucco-fronted properties, will be one of the most expensive houses in Britain; worth an estimated £150 million (US$ 242.5 million).Other properties owned by the billionaire include; a chateau in Cap d'Antibes, on the French Rivera, two homes in an Aspen ski resort, Colorado, two villas on the Caribbean Island of St Barts and two mansions near Moscow, Russia.Article source... http://blog.oceanvillasgroup.com/chelsea-fc-roman-abramovich-buys-25-million-stop-gap-london-property/Rebecca Smith Ocean Villas Group - http://www.oceanvillasgroup.comRebecca Smith is a real estate journalist with more than 15 years experience. She is currently the sales director for Ocean Villas Group who specialise in luxury ocean view property investments worldwide.For more Investment and property news... Click here - http://blog.oceanvillasgroup.comOcean Villas Group Level 31, 6 Battery Road, Raffles Place, 049909, Singaporemailto:info@oceanvillasgroup.com

02-28-2011 | Politics, Law & Society
Ocean Villas Group Pte. Ltd.
Chelsea owner Roman Abramovich opens the books on his billions
Chelsea Football Club owner, Roman Abramovich, has recently had to make a declaration of just how wealthy he actually is. Russia’s fifth richest man has announced he will run for re-election as a member of parliament for Chukota, Russia, where he served as Governor for eight years from 2000. Russia’s election laws require all candidates standing for election to declare their assets before they run for office. According to the declaration, Roman
10-26-2007 | Energy & Environment
Zalul
BENJAMIN KAHN, MARINE BIOLOGIST AND NOTED PHILANTHROPIST, HONORED BY TIME MAGAZI …
TEL AVIV, Israel – Benjamin Kahn, Chairman of Zalul, Israel’s leading environmental organization focused on safeguarding the nation’s seas and rivers, was announced as one of 43 honorees from around the world at Time Magazine’s annual TIME Heroes awards celebration and ceremony, to take place October 25th at the Royal Courts of Justice in London. This year’s event corresponds to the magazine’s first “Heroes of the Environment” spread in the
Comments about openPR
9 o'clock: discuss press release with client, 10 o'clock: submit release to openPR, within the briefest possible time release is published and displayed in a prominent place on openPR.de. I am thrilled!
Zehra Spindler, Calypso Now! - Communication Agency