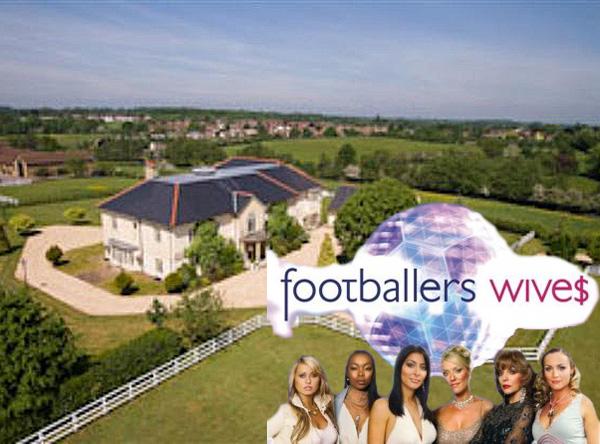 Elsenham House, the property used in the UK TV drama ‘Footballers Wives’, has been put on the market by its owner Richard Maher.

The property is located on the border between Essex and Hertfordshire and is only two miles from Stansted Airport. The main house has a total living area of 1,300 Square metres (14,000 square feet) which is about the same as ten, three bedroom, semi-detached houses in the UK.

Footballers Wives was filmed at Elsenham House for a year, during which time Maher and his wife shared their home with forty cast members and crew.

They were paid £3,000 (US$5,000) per day for use of the property and enjoyed watching the filming, although they would escape to their villa in La Manga, Spain whenever they could.

Maher’s wife Shenda is not unused to being around celebrities as she grew up with Spice Girl Emma Bunton and attended stage school with Denise Van Outen. She also appeared in the 1980’s UK sitcom ‘Me and My Girl’.

Maher himself seems to have an affinity with famous properties as his previous home, Rowneybury House in Sawbridgeworth, Hertfordshire, is now owned by David Beckham and his wife Victoria. The property, now commonly referred to as ‘Beckingham Palace’, was a former children’s home which Maher remodelled.

After selling the property to David Beckham for £2.5 million (US$4 million) in 1999, Maher bought Elsenham House from adult filmmaker David Sullivan. The house had been built to resemble the Southfork Ranch from the US TV show Dallas and it appealed to Maher as the stables and 160 acres of land were perfect for his show-jumping son, Ben.

However, Maher later realised the ceilings were too low and tore it down. He rebuilt Elsenham House at a cost of £1 million (US$1.6 million) after studying old photographs and books to gain some architectural inspiration.

The house was originally part of Elsenham Stud and home to a number of racehorses including the famous Golden Miller, but now the house has been separated, with 150 acres of land being allocated to the stud farm.

Maher and his wife now feel the property is too big for them and are looking for a smaller house in Bishop’s Stortford, Hertfordshire.

Elsenham House is currently on the market, complete with ten acres of land, for £3.5 million (US$5.6 million).

Rebecca Smith is a real estate journalist with more than 15 years experience. She is currently the sales director for Ocean Villas Group (http://www.oceanvillasgroup.com) who specialise in luxury ocean view property investments worldwide.