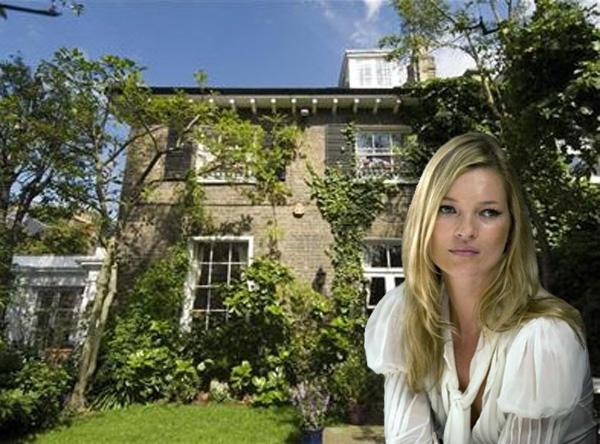 It seems that Kate Moss may become the latest victim of the UK property crash; the thirty seven year old model is franticly trying to sell her five bedroom, Victorian home in Melina Place, London - even if it means she makes a £1 million (US$1.6 million) loss.Moss bought the property in 2007, when prices in London were approaching their peak, for £8 million (US$ 13 million). According to reports, she has had little interest from buyers since putting it on the market for the same price, so the asking price has been slashed to £7 million (US$11.2 million).Since she bought the London property, the UK model has redesigned the interior in her own distinctive style, including a neon-lit party area and a jungle themed living room; features which may deter the more conservative buyer.However Marcus Parfitt, an up-market London estate agent, thinks that the problem "might simply be that the Victorian house is not in a fashionable postcode. There have been no offers as yet. The problem with this one is that you’re not in one of the chosen roads in the area.""It’s a little bit on the periphery and from a snobbery point of view some people have not gone for it because it’s in the wrong district. As a house goes, though, it’s lovely. If it were a few streets away, it would be much more expensive," he added.Moss bought the home after splitting with partner and Baby Shambles singer Pete Doherty, but has not had much luck with the property since moving in. In fact, she’s even gone so far as suggesting her house is "jinxed".Last year the model’s home was flooded with sewage which caused £100,000 worth of damage to furniture, her shoe collection and photographs by Mario Testino.However, Kate’s long suffering neighbours will be keen for her to make a quick sale, having frequently complained about her party lifestyle.In 2007 the police and local council were called in due to alleged anti-social behaviour and there have been frequent complaints ever since.If Kate does manage to sell her “jinxed” London property she is hoping to move into a new house in Highgate, North London which has nine bedrooms, two wine cellars and staff quarters. This new property is currently on the market for £8 million (US$ 13 million) and is the former home of well-known romantic poet Samuel Taylor Coleridge whose works include the famous poem Kubla Khan.When she does finally sell, Kate will be near to her close friends Jude Law and Sienna Miller who have both been encouraging her to move to the area.Article source: http://blog.oceanvillasgroup.com/kate-moss-set-to-lose-1m-in-uk-property-crash/Rebecca Smith Ocean Villas Group - http://www.oceanvillasgroup.comRebecca Smith is a real estate journalist with more than 15 years experience. She is currently the sales director for Ocean Villas Group (http://www.oceanvillasgroup.com) who specialise in luxury ocean view property investments worldwide.Level 31, 6 Battery Road, Raffles Place, 049909, Singapore

12-14-2018 | Advertising, Media Consulting, …
HTF Market Intelligence Consulting Pvt. Ltd.
Edible Animal Fats Market to Witness Huge Growth by 2023 | Darling Ingredients, …
HTF MI released a new market study on Global Edible Animal Fats Market with 100+ market data Tables, Pie Chat, Graphs & Figures spread through Pages and easy to understand detailed analysis. At present, the market is developing its presence. The Research report presents a complete assessment of the Market and contains a future trend, current growth factors, attentive opinions, facts, and industry validated market data. The research study provides
04-26-2018 | Industry, Real Estate & Constr …
QyResearchReports
Global Shoulder Bags Market Size: Kate Spade, LVMH, Michael Kors, Mulberry
Qyresearchreports include new market research report “Global Shoulder Bags Market Research Report 2021” to its huge collection of research reports. This report studies Shoulder Bags in Global market, especially in North America, Europe, China, Japan, India and Southeast Asia, focuses on top manufacturers in global market, with sales, price, revenue and market share for each manufacturer, covering ART – BERG Burberry Group Chanel Coach Hermes International Kate Spade LVMH Michael Kors Mulberry Prada Ralph Lauren Tory Burch Adidas Download Free exclusive Sample of this report:
08-10-2017 | Business, Economy, Finances, B …
Fior Markets
Global Women's Backpacks Market 2017 - Coach, Kering, Prada, Michael Kors, Herme …
The research study titled ‘Global Women's Backpacks Industry 2017’ evaluates the performance of the Women's Backpacks market the world, at present and historically, and makes future projections based on the result of the analysis. The report analyzes the global market for Women's Backpacks from the perspective of the market chain supporting the industry, the statistical data regarding import and export, and the dominant market dynamics. Download Sample Report @ https://www.fiormarkets.com/report-detail/91375/request-sample Starting from
11-17-2016 | Business, Economy, Finances, B …
Kate Dewick
Marketing Consultant and Strategist Kate Dewick Launches Her New Website
Website KateDewick.com goes Live on November15, 2016. Kate Dewick, aka "Modern Marketing Expert" launches her new website – KateDewick.com with lots of user engagement features, it also offers a wide variety of tips and trusted methods to boost profits through updated websites and other digital media types. Kate’s website is full of lucrative information regarding how to create, build and sustain audience engagement, build trustworthy relationships with peers and how to increase
10-29-2010 | Leisure, Entertainment, Miscel …
goodypass.com
goodypass.com – Join Kate Garraway for the best Celebrity Deals
The world of the celebrity can appear to be one of first class service and perks, a place that can only be glimpsed at and dreamed of through the pages of celebrity magazines. It's a world that includes private parties and endless free gifts, out of reach of their fans and followers. Or so we have been led to believe... goodypass.com is an exclusive new service that offers users the opportunity
10-14-2009 | Arts & Culture
The Art Gallows
New Work from Kate McKinney, Los Angeles Artist
Kate McKinney, a Los Angeles artist, is currently showing at Hebrew Union College in Los Angeles. Her installation in the exhibit “Fresh Voices of Jewish Art,” presents the viewer with a spiritual tableau aptly titled “The Amazing Experience.” The elements of her piece, which have been assembled with loose spontaneity, are suggestive of itinerant theatre or a child’s urgent drawing that witness a profound event. The entire installation is hung
Comments about openPR
9 o'clock: discuss press release with client, 10 o'clock: submit release to openPR, within the briefest possible time release is published and displayed in a prominent place on openPR.de. I am thrilled!
Zehra Spindler, Calypso Now! - Communication Agency