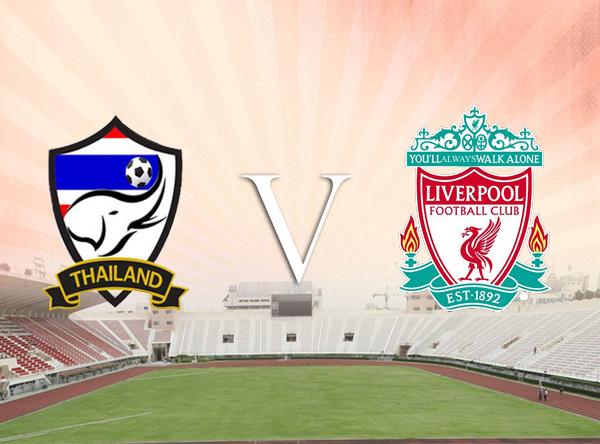 Phuket, Thailand: Fans of Liverpool Football Club in Thailand are gearing up for a very important charity game in Phuket this June.Liverpool Legends, a team made up of ex Liverpool Football Club players, are set to play two friendly games against The Legends of Thailand. The first match is scheduled for June 15th at Bangkok’s Yamaha stadium.Players will then travel south to Phuket to play a second game at Surakul Stadium in Phuket Town on June 18th.The Liverpool Legends team includes players Ian Rush, John Barnes, Jason McAteer, Steve McManaman, Robbie Fowler, Phil Neal, Bruce Grobbelaar, Jan Molby and Alan Kennedy.The Thailand Legends team will be led by striker Piyapong Pue-on."Our aim is to establish an annual series of events featuring some of the great players of the past," commented Cris Rosenbergs, CEO of Powerair Management Group, who are organising the tour.In a recent promotional visit to Phuket, footballer Alan Kennedy gave interviews at Phuket FM Radio Station and visited The Youth Football Home Foundation, where the money raised at the events will be donated.Based in Phuket, The Youth Football Home Foundation was set up to provide education and training for orphaned and destitute boys throughout Thailand.The charity, which can house up to thirty two boys, was founded by German businessman, Henrik Lorenz in May 2007. Henrik was a first division goalkeeper in Hong Kong during his younger days and, as the founding trustee of the charity, provided all the funds to build The Youth Football Home.He also built the Katja House; a charity which cares for street children in Kathmandu, Nepal.Fans of Liverpool Football Club will also have the opportunity to meet their idols when the squad visits schools and shopping centres across Phuket and Bangkok. Their goal is to raise over £100,000 (5 million Baht) for the Foundation.The Youth Football Home Foundation will be holding coaching sessions where young players can receive training and tips from the ex-Liverpool footballers.If you’re a Liverpool Football fan and would like to go see the games in Phuket or Bangkok, tickets are available from online here - http://www.footballlegendstour.comIn case you can’t get to one of the games, rumour has it that True Visions (Thailand’s satellite Television) will be showing the Bangkok friendly live.Article source: http://blog.phuketoceanvillas.com/liverpool-football-club-legends-shoot-for-phuket-thailand/Rebecca Smith Phuket Ocean Villas - http://www.phuketoceanvillas.comRebecca Smith is a real estate journalist with more than 15 years experience. She is currently the sales director for Phuket Ocean Villas (http://www.phuketoceanvillas.com) who specialise in luxury ocean view property in Phuket, Thailand.149/12 Srisoonthorn Road, Cherngtalay, Thalang, 83110, Phuket, Thailand

07-04-2011 | Sports
Expertfootballpicks.net
Expert Picks For College Football From Expert Football Picks
Marianna, FL (openpr ) July 01, 2011 - Recently launched, Expert Football Picks will provide the latest Expert Football Picks for this upcoming 2011 College Football season. The Expert Football Picks team has over 20 years experience in sports picks and they are now developing on online presence to reach a larger audience to share their expert knowledge. The Expert Football Picks website will be providing up to date sports
06-01-2010 | IT, New Media & Software
mobivention GmbH
Football widget published by mobivention
Cologne, Germany – June 1, 2010 – Football fans are ready for the World Cup in South Africa and cannot wait for the start of the games. mobivention has developed a mobile widget for Football fans which keeps them informed about actual results of each game and each participating country. The ‘Play Off’ widget is compatible with numerous handsets and shows lastest game results. The presentation of the results
07-07-2008 | Business, Economy, Finances, B …
rb health and safety
Sponsorship for Local Football Team
Local football team “tackleway” (Hastings) have recently received sponsorship from an established health and safety company. RB Health and Safety Solutions Ltd who manage all aspects of health and safety from training to management, offered to sponsor the club this year. Operations manager Justin Jarrett attended one of the teams games to see how the money was being used. Justin said “we are pleased to offer something
04-30-2008 | Sports
Castrol UK and Ireland
European Football Championship 2008: Shut out
Clean sheets may be the name of the game, but for goalkeepers shot-stopping is the way to top the Castrol Performance Index rankings. And goals. Well, you never know… There are 13 recorded instances of goalkeepers scoring from open play. That number could become 14 this summer, but there are easier ways for our international stoppers to accumulate points … …Like distribution, for example. Long before the back pass rule was introduced
04-25-2008 | Sports
Castrol UK and Ireland
European Football Championship 2008 - The main man?
The last European Championships ended with Cristiano Ronaldo in tears as Portugal lost in the final, but this summer, euro2008. castrolindex.com users reckon the Manchester United man – currently not even in the CPI top 20 – will be crying tears of joy… Had the Castrol Performance Index been up and running for Euro 2004, Ronaldo would have starred prominently. He scored twice – once in the semi-final – and was
02-11-2008 | Sports
Castrol UK and Ireland Motor Oil and Lubricants
European Football Championship 2008: Euro-Files Switzerland
Switzerland’s talented squad could do worse than listen to Fairground Attraction’s swooping folk ballad ‘Perfect’ on the team bus during UEFA Euro 2008TM. Because their coach Jakob Kuhn has set them a simple but ambitious target: “Play perfect football. We should aim for nothing less.” But does Kuhn have the players to deliver perfect football? Much will depend on the form of goalscoring skipper Alexander Frei, whose strike rate – 32
Comments about openPR
I can't but agree to the positive statements about your portal: easy to use, clear layout, very good search function, and quick editing!
Jens O'Brien, Borgmeier Media Communication