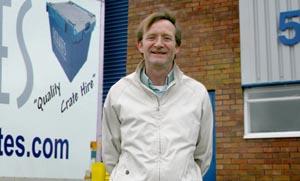 Crate rental specialist Pluscrates has announced the opening of its new premises in Bristol; the new service centre located on the Cala Trading Estate opened its doors for business on 9 February. The move brings the total number of service centres in the UK to five and will enable the company to optimise its services throughout the southwest of England.Pluscrate’s Managing Director John Mitchell said, “Opening a new centre and taking on all the overheads associated with that is always an important decision. This one was made easier mainly because of the volume of enquiries and the number of orders we’ve been fulfilling in the region. Opening our south western service centre has immediately enabled us to operate more efficiently, reduce our running costs and offer a more competitive service to our clients and prospective clients. It’s a perfect match.” When it came to appointing a manager for the new centre regional director Nick Flaxman had a stroke of luck courtesy of social networking site Facebook. “I’d planned to contact a former colleague of mine, Kevin Parkinson at the appropriate time, but quite by chance I noticed a posting on Facebook saying he was planning a career change. I had to act quickly to get Kevin on board but thankfully I got there in the nick of time and he accepted the job. We’ve been offering a local service in the area since October last year.”As a local man Kevin was ideally placed to advise on the location of the new depot and after a lot of searching found the ideal building just to the southwest of the city. Although originally from Watford Kevin headed west over forty years ago and now regards himself as a West Country man. He lives in nearby Clevedon with his wife Bobbie, a native Bristolian. “I love the West Country and would be hard pressed to consider living anywhere else,” said Kevin. I’m thrilled that Pluscrates has recognised the benefits of investing in our region and in me. It makes me feel proud and I’m really looking forward to growing our business here.”Pluscrates is the fastest growing provider of returnable transit packaging (RTP), containers and packaging consumables in the United Kingdom, providing a premium crate rental service to the commercial relocation and facilities management markets, as well as to the domestic removals market.David Jordan The Words Workshop 26 Swanwick Lane, Milton Keynes, MK10 9LD. Tel: 01908 695500 Fax: 01908 690099 mailto:david@thewordsworkshop.co.uk http://www.thewordsworkshop.co.uk All business enquiries to:John Mitchell Pluscrates Ltd. Unit 9, Towers Business Park, Carey Way, Wembley, HA9 0LQ Tel: 020 8900 0321 Fax: 0208 903 0188 mailto:JohnM@pluscrates.com http://www.pluscrates.com

09-12-2012 | Logistics & Transport
Pluscrates Ltd.
Commercial Relocation Makes Hay in Olympic Summer
The traditional summer upturn in commercial relocation saw early and unprecedented activity ahead of the London Olympics, according to John Mitchell, Managing Director of crate rental specialist, Pluscrates Ltd. “Crate rental activity is a crude but effective indicator for commercial relocation. We added close to 100,000 crates to our working stock ahead of the London Olympics and, importantly, for others in the commercial moving business who saw a similar uplift, that’s
03-13-2012 | Logistics & Transport
Pluscrates Ltd.
Pluscrates to Open New Birmingham Depot
Leading crate rental specialist Pluscrates has announced the relocation of its Nuneaton depot to new larger premises in Birmingham. Completion is due to take place on 25 February. The new 30,000 ft site will provide around 50% more storage space and allow better access to the Midlands motorway network. “We’ve seen a steady growth in business in the Midlands area during the past few years and the new depot will
10-25-2011 | Logistics & Transport
Pluscrates Ltd.
Crown Relocations Appoints Pluscrates in Exclusive Three-year Deal
Pluscrates has signed an exclusive three-year deal with Crown Relocations to supply crates throughout the UK and Ireland. The move comes following Crown’s continued growth in the commercial relocation sector. Pluscrates’ Managing Director, John Mitchell said, “Crown Worldwide Group is well known to us and we have coveted the opportunity to support Crown Relocations since we began trading in 2008. We’ve had to be patient but now we have been presented
09-12-2011 | Logistics & Transport
Pluscrates Ltd.
Whittle Group Appoints Pluscrates as Sole Supplier
Lancashire-based moving specialist Whittle Group Ltd has appointed Pluscrates as sole supplier of crate hire services for its commercial moving business. The company made the decision based on positive feedback from others in the commercial moving industry and Pluscrates’ ability to deliver high-quality products to customers throughout the United Kingdom. Pluscrates began supplying crates to Whittles in June and has seen a steady follow of orders for commercial relocations. During that time