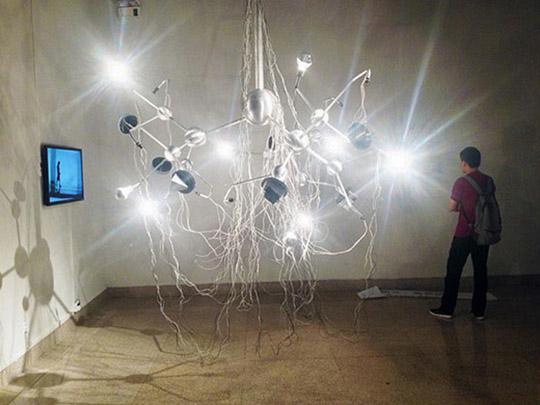 ALL EXIT FEATURING JENNIFER + KEVIN MCCOY Show Runs Through January 3, 2015 Extended hours Friday December 5th, open until 8 pm. In their second exhibition with Johansson Projects, entitled All Exit, Jennifer and Kevin McCoy present new works that spin out from the landscape of the Californian west, from farmland to corporate campus.California, with its nexus of computer, entertainment, and military industrial centers is seen as the conclusion, both geographically and ideologically, of the frontier fantasy of the American dream. The title, All Exit, is taken from internet rhetoric in which Silicon Valley scions write about moving beyond California to create new, legislatively permissive, zones of privilege. In these new projects, constructed as wall-mounted dioramas, the McCoys present elaborate fabrications that extend from the physical nerve centers of the tech headquarters to the imaginary landscape of board game fiction.Employing exhaustive categorization, recreation, automation, miniaturization, and remote viewing, the McCoys create kinetic, multi-media, multi-faceted sculptures. Installations ranging from miniature dioramas to all encompassing environments invite the viewer to see sculpture, camera, and screen as one in the production of live experience.In the installation, Priests of the Temple, (2012) an office building juts out of a Mt. Rushmore-style mountain. The embedded video incorporates found images from a Silicon Valley hotel spa. Behind the building, a portrait of Intel co-founder Gordon Moore looms like a Pyongyang mural. Also on view, Between the Resorts depicts a no man's land between a simulated ski slope and a simulated water park. Embedded video shows images of sand blowing across pavement, an echo of the natural environment that has been obscured. This project was made possible in part by Headlands Center for the Arts.The Constant World 2014, built of ceiling mounted metal spheres, models, cameras, and lights, features sound and evolving video playback. The piece presents a utopian world that acts as its own advertisement. Individual miniature film sets, when filmed live and sequenced on a large screen, portray a film noir psycho-drama. The resulting video beckons the viewer to inhabit the sculptural space, becoming a part of the piece physically and on screen; the viewer becomes an inhabitant of the piece - actively attributing and interpreting meaning.Jennifer and Kevin McCoy have been exhibited at The Metropolitan Museum of Art, P.S.1, The Museum of Modern Art, The New Museum, and SmackMellon. International exhibitions include projects at the Pompidou Center, the British Film Institute, ZKM, the Hanover Kunstverien, the Bonn Kunstverein, and F.A.C.T. (Liverpool, UK). Grants include a 2002 Creative Capital Grant for Emerging Fields, a 2005 Wired Rave Award, a 2011 Guggenheim Fellowship, and a 2014 Alumni New Works grant from the Headlands Center for the Arts. Articles about their work have appeared in Art in America, Artforum, Flash Art, Art News, The New York Times, and Newsweek. Residencies include work at the Headlands Center for the Arts, and the Lower Manhattan Cultural Council. Their work is in collections at the Museum of Modern Art, The Metropolitan Museum of Art, the Milwaukee Art Museum, and MUDAM in Luxembourg.Johansson Projects is a contemporary art gallery that functions as curatorial laboratory, creating exhibitions that pair established and internationally-recognized artists with up-and-coming locals. Its moss ceiling by Misako Inaoka and unique architecture allows for innovative exhibitions in a fully immersive viewing environment. With no show confined purely to gallery walls it prompts viewers to actively engage with artists who explore the mysteries embedded in modernity often using unorthodox materials and methods. Johansson Projects is a locus for curators, collectors, and artists to connect and engage in dialogue with the larger art community both regionally and nationally.Johansson Projects 2300 Telegraph Ave, Oakland, CA 94612 Phone: (510) 444-9740 Email: info@johanssonproject.com Website: http://johanssonprojects.com/

12-21-2021 | Arts & Culture
Johansson Projects
High Plains | Rachelle Bussières, Blaise Rosenthal, Andy Vogt
Johansson Projects presents High Plains, a three-person exhibition featuring the work of Rachelle Bussières, Blaise Rosenthal and Andy Vogt. Ranging in mediums from exposures on gelatin silver photo paper, to reclaimed wood lath constructions, and layered painting and drawing on canvas, these three artists use unique vocabularies to compose reflections of individual experience. Their practices share in the use of time and transmutation, each performing acts of alchemy in the
06-25-2021 | Arts & Culture
Johansson Projects
Thinking, Staring & Smoking | Robert Pokorny solo exhibition
Johansson Projects presents Thinking, Staring, & Smoking, Robert Pokorny’s new show opening July 31, 2021. A response...by Garrett M. Brown “What a long strange trip it’s been...” might be the Grateful Dead refrain you hear as you view Robert Pokorny’s stunning collection of paintings (acrylic on linen), drawings (charcoal and crayons) and a portfolio of unframed drawings. Rather than sitting in a bar, The Grateful Dead would be jamming to us, along
04-12-2021 | Arts & Culture
Johansson Projects
Miguel Arzabe // Cóndor de Cuatro Cabezas (Four-Headed Condor)
Johansson Projects is pleased to announce a forthcoming solo exhibition of recent works by Oakland-based artist Miguel Arzabe entitled Cóndor de Cuatro Cabezas (Four-Headed Condor), which will be on view to the public [by appointment] from May 8 through July 24. The exhibition’s title is inspired by the ancestral mythology of the indigenous Sacaca people Bolivia, who held a pantheistic conception of the world that featured the transposition and recombination
01-25-2021 | Arts & Culture
Johansson Projects
Community Garden
At a time when it feels like the light is finally breaking through the darkness, Community Garden — a group exhibition of seven artists — cultivates an abundance of connections. Using a variety of methods, the artists achieve a naturalism that aesthetically binds their work together into a single gesture, allowing us glimpses and sensations of the open spaces where we once walked freely, and will soon return. Community Garden features: