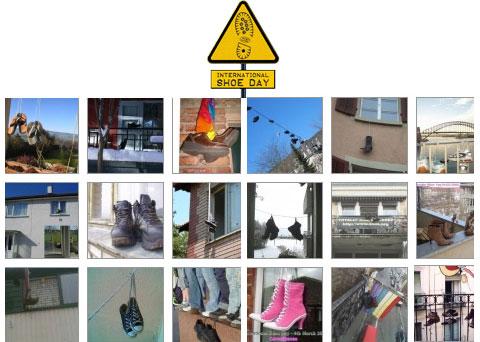 Zurich, Switzerland: 24th February 2011: -- The global coming out with your flip flops, Sneakers and Birkenstocks Yes, it’s that time of the year again when lesbians from every corner of the world hang their shoes outside their window on March 4th to promote lesbian visibility on SHOE DAY 2011.

This crazy idea comes all the way from Switzerland. The founders of the popular lesbian online community shoe.org asked their members for fun ideas to promote lesbian pride back in 2004. The over 160’000 strong SHOE community came up with many different ideas but one has now become virtually a cult!

For the past 6 years lesbians from all around the world are hanging a pair of shoes outside the window every March 4th. So everyone, even those with a not fully functioning Gaydar can walk around in their neighboorhoods and check out where other lesbians live. It was said that some were lucky enough to get invited for a cup of coffee. Wouldn’t that be a grand way to start a movie?

The idea is simple and easy to do and that probably explains it’s huge success. So far Lesbians in USA, Canada, Mexico, Europe have taken part but also as far away as India, Kyrgyzstan, Estonia, South Korea, Czech Republic – places, you would normally not hear of any lesbians.

For a whole day, the lesbian community unites and showes pride, simply by hanging their shoes outside their window. Without fear for those, who haven’t come out to their friends and family yet. As those women can participate in this fun without facing confrontation or prejudice, as no-one else knows what they are doing!

The next «SHOE DAY» will be held on 4 March 2011. Women everywhere are encouraged to participate in this international Coming Out Event.

Get your shoes out the closet – it’s time to publicly display lesbian pride!

The “Dreamteam” - as they've recently been dubbed by the media - met, fell in love and founded SHOE all in one eventful evening back in 1997. They got married in September 2010.

Fab and Sunci both live and work in the beautiful surroundings of
Oberlunkhofen, Switzerland with their Boston Terrier called “Corky”.

12-07-2018 | Health & Medicine
Spring Forest Qigong
7 Day Blessing 2019
7 Day Blessing 2019 A Free On-Line Healing Chanting Meditation Event Sunday January 6th through Saturday January 12th A new year is a time for rebirth, renewal, rejuvenation, replenishment, and rejoice. There is no better way to embrace this rekindling of the spirit than communal meditation. Join us January 6 – 12 as we follow the lead of Master Chunyi Lin and three Tibetan Monks in a collective gathering of enlightening meditation. This 7
11-05-2018 | Logistics & Transport
Silver Service Taxi Melbourne
Melbourne Cup Day
The Melbourne Cup is annually held on the first Tuesday in 6th November with the day being a half day public holiday in Victoria and a full day holiday in Melbourne. In This event Silver Service Taxi Melbourne providing a taxi service in very affordable prices because in this event finding a taxi is very difficult and if you are lucky to get one it will cost you a fortune
03-16-2017 | IT, New Media & Software
Algoworks
Women’s Day Celebrations 2017
On the occasion of International Women’s Day, Algoworks celebrated this special time with joy and delight by expressing gratitude towards the women of their workplace, and made them feel special and loved. The entire day was dedicated to all the women employees of Algoworks and their valuable presence in the team was celebrated with glee. The entire premises were adorned with balloons and flowers. Women employees were dressed up in
09-23-2016 | Health & Medicine
PRO RETINA Deutschland e.V.
World Retina Day 2016
On World Retina Day, Saturday September 24th 2016, Retina International urges the Global Retina Community to advocate for access to Genotyping services that will expedite the development of therapies for unmet need. Retinal Diseases are among the most common causes of vision loss in the global working population. The impact of these conditions on quality of life, be they rare and inherited or age-related, is immense. However there is
10-17-2014 | Health & Medicine
Relaxa UK
National Stress Awareness Day
National Stress Awareness Day is on Wednesday 5th November 2014. Relaxa is offering employee stress & wellbeing health promotion packages starting at £255 on or around this date - incorporating a range of stress & wellbeing activities for your staff. There are 9 cost-effective stress and wellbeing promotion packages available below: 1) Stress Health Promotion Package 1 - £255.00+vat 2) Stress Health Promotion Package 2 - £399.00+vat 3) Stress Health Promotion Package 3
10-13-2011 | Leisure, Entertainment, Miscel …
Blue on Highland
Boss Appreciation Day
WHAT: In celebration of National Boss Day, Blue on Highland located in Needham, MA, is honoring all bosses, by offering guests a free appetizer when they dine with their boss during lunch on Monday, October 17th, 2011. Celebrated annually on October 16th, National Boss Day was founded in 1958 when Patricia Bays Haroski, an employee at State Farm Insurance Company in Deerfield, Illinois, designated it a day to show appreciation
Comments about openPR
OpenPR ist the nicest and most clearly laid out PR platform I have seen to this day. The press releases are displayed very nicely and clearly and without any unnecessary frills. The updates are fast and the finished release looks appealing and is clearly legible. Even with 16 years of experience one discovers new things from time to time. Congratulations!
Gabriele Ketterl, Director Marketing & PR, Menads