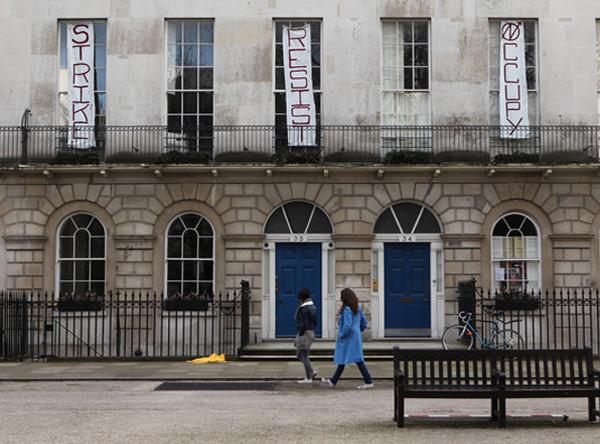 The group of squatters who have taken over Guy Ritchie’s £6 million (US$9 million) London property have been ordered to leave.The group, who call themselves “The Really Free School”, were represented in court by first-year law student Tom Brianmurray, who claimed the eviction notice had not been properly placed and requested further time to prepare a defence.However, district Judge Marc Dight, on hearing the defence lawyer was in fact a law student, rejected all legal arguments saying; “You could have told me that to begin with."Judge Dight then granted an interim eviction order with a full hearing set for next Friday.The property is located in London’s Fitzrovia in the borough of Camden. The Grade I listed building, which was built in the 1790’s, saw the squatters move in last week.Guy Ritchie, ex-husband of pop icon Madonna, bought the former language school in May last year after it had stood empty for three years. He was in the process of converting it into two separate homes.It is still unknown whether the squatters knew the property belonged to the Lock Stock and Two Smoking Barrels director before they moved in.When Ritchie finally moves in, his new neighbours will include Gary Kemp, from 80’s band Spandau Ballet and comedian Griff Rhys-Jones.Some residents in the property’s exclusive neighbourhood have been angered by the occupation of the squatters; one woman even chased two of them down the street and demanded to know how long they intended staying.“I don’t like it at all. There is no substance to their ridiculous cause. They don’t own the building, why should they live in it?” another resident commented.Renovations have all but stopped for the time being, with building contractors now unable to gain access to the building.“It’s a real cheek, this property has not been empty. We have had workmen in there as recently as Friday. Our scaffolding is in there. It’s not safe to be in at all,” said a spokesman for the building contractors who were working on Ritchie’s house at the time the squatters moved in.One neighbour, who did not want to be named, said: "The police said we were lucky they were not the bad sort of squatters, but they said they will be moving in in force and will be bringing a grand piano."Recent reports and the squatter’s Twitter page suggest that, following the interim court order, most of them have already left the house without waiting for Friday’s full hearing.Apparently they have moved on to their next target, the Black Horse pub at 6 Rathbone Place, just off Oxford Street, London.Read more from the source here... http://blog.oceanvillasgroup.com/madonna-ex-guy-ritchie-evicts-squatters-from-property-in-london/Rebecca Smith Ocean Villas Group - http://www.oceanvillasgroup.comRebecca Smith is a real estate journalist with more than 15 years experience. She is currently the sales director for Ocean Villas Group ([url]http://www.oceanvillasgroup.com[url]) who specialise in luxury ocean view property investments worldwide.For more Investment news... [url]http://blog.oceanvillasgroup.com[/url]Level 31, 6 Battery R6oad, Raffles Place, 049909, Singapore

You can edit or delete your press release Madonna ex, Guy Ritchie, evicts squatters from property in London here