“Thumbs Up: Over the Hill and On the Road” by Tom Ritchie


Press release from: PR for THUMBS UP 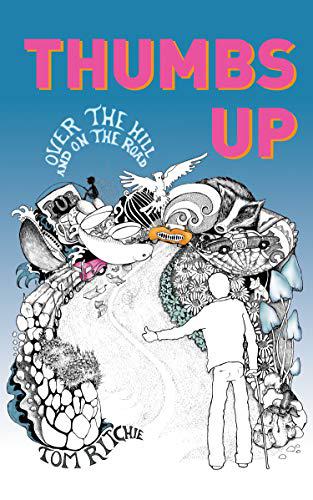 THUMBS UP by Tom Ritchie

ISBN #978-1789551990“Thumbs Up: Over the Hill and On the Road” by Tom RitchieA hitchhiker’s adventure and road-movie across southern EnglandAbout the Book:Thumbs Up – Over the Hill and on the Road takes the reader on a hitchhiking adventure across southern England where we follow Tom, who has hit the road after a stress meltdown.Thumbs Up is a light-hearted road-movie where we meet the drivers who are kind enough to stop for our elderly hitchhiker. They share their stories – their work, their families, their loves and losses, their hopes and dreams.You have in your hand a playful ramble, a collection of authentic real-life stories, blended with images and reflections from the world of hitchhiking, past and present.As a road-movie documentary and biographical narrative, Thumbs Up attempts to portray events as they happened in real life. But as the book points out, things are not always as they seem. As our tale unfolds notions of time, past and future dissolve and we see how our lives are intertwined in unforeseen and uncanny ways.You are invited to come on a journey where hitchhiking takes us into the magical space of the present moment.Excerpt from the Book:“So I was standing there just outside of Austin one very hot day when this van suddenly pulled over. I grabbed my backpack and ran to the passenger side of the vehicle and opened the door. For just a split second I was speechless. The guy in the driving seat was a leather-bound biker ¬ a rocker. He looked like a cross between a Black Sabbath fanatic and an inmate from San Quentin. He could have come straight out of a Tarantino movie.He had long greasy-looking black hair, sunken eyes, a thin frame, tattooed arms and chest, heavy earrings ¬ the lot. His dramatic appearance caught me off guard so I stood there for a second, momentarily stunned. He offered me a ride heading west, so quickly regaining my composure I said ok¬ and got in the van beside him. He took me all the way from Austin to El Paso, which is about 570 miles.We talked casually about this and that as we drove, and we got on fine. It turned out that he was a member of a motorcycle club going by the name of Bandidos, which I¹d never heard of. I later learned that Bandidos are more or less like The Hells Angels, and I suppose you have to be a bit of a bad lad to get involved with them. However he was friendly to me ¬ I think he accepted me as I was a hitchhiker, and as such was not part of mainstream society, the system. He thought it was cool that I was from London, England ¬ some Americans do, or at least they did then. And I think he was happy to have some company on the long drive to El Paso.’”Thumbs Up: Over the Hill and on the Road is available in hardback from Amazon at:https://www.amazon.co.uk/Thumbs-Up-Over-Hill-Road/dp/1789552001 This entertaining road-movie is available in paperback from Amazon at:https://www.amazon.co.uk/Thumbs-Up-Over-Hill-Road/dp/1789551994 The e-book version can also be downloaded from Amazon at:https://www.amazon.co.uk/Thumbs-Up-Over-Hill-Road-ebook/dp/B07GR7SQHB Press/Media Contact Details:New Generation Publishing Tel. 01234 712 064 E-mail: info@newgeneration-publishing.comNew Generation Publishing is a professional publishing company in England.Legend Times 107-111 Fleet Street London, England EC4A 2AB

You can edit or delete your press release “Thumbs Up: Over the Hill and On the Road” by Tom Ritchie here

09-21-2018 | Arts & Culture
PR for RETROSPECT
“Retrospect” by Tom Tottis is published
ISBN #978-1787197305 “Retrospect” by Tom Tottis is published A family saga spanning three generations from Budapest in the 1920s to London in the 1990s About the Book: Based on a true life story, RETROSPECT is about human fortitude, chronicling the life of a Hungarian family, eventually reduced to just mother and son, and their struggle during Nazism in the early 1940s, followed by tyrannical Communism, the Hungarian Uprising in 1956, and the aftermath. From Budapest
07-09-2018 | Business, Economy, Finances, B …
ReportsWeb
Automotive Telematics Market 2018-2022 Global Key Companies - Trakm8 Holdings, T …
Telematics is the field of science in which the long-distance transmission and communication between computer-based information is arranged. In simple terms, receiving, storing and sending of computer based information is performed with the help of telematics system. The technology of telematics is generally used in different types of vehicles. Automotive telematics is the technology that deals in ensuring the safety of the car and its passengers by providing diversified computer-information based
05-24-2016 | Advertising, Media Consulting, …
Amscreen
AMSCREEN TERMINATES AGREEMENT WITH TOM GODDARD’S DIGICOM
Amscreen regretfully announces that it has today terminated its sales agency agreement with Digicom Out Of Home Digital Media Limited (“Digicom”) and temporarily suspended the advertising service on its network of forecourt screens. This follows the filing of a Notice of Intention to Appoint an Administrator by Digicom on Friday 13th May 2016. We were informed by Digicom shortly after this that payments due to Amscreen under the terms
02-05-2013 | IT, New Media & Software
Omniplex Ltd
Tom Kuhlmann explains ‘interactivity’ at Omniplex seminar
Tom Kuhlmann, one of the world’s best known e-learning designers and currently number three in the ‘World’ list of the Top Ten Movers and Shakers in corporate online learning, discussed the ‘what, when and how of interactivity’ with an invited audience at The Cellar at Vinopolis, on London’s south bank, at the end of January. Hosted by Omniplex, an official certified Articulate partner and an Articulate Centre of Excellence, as a
04-22-2011 | Arts & Culture
Aurel Scheibler / ScheiblerMitte
Tom Chamberlain : Some Other Time
Tom Chamberlain Some Other Time Opening: 29 April 2011, 6 - 9 pm Duration: 30 April – 24 June 2011 Location: Aurel Scheibler / ScheiblerMitte Charlottenstraße 2 (in the Alley) 10969 Berlin The British artist Tom Chamberlain (*1973) engages the simplest of artistic means to achieve an unusually high degree of visual complexity
05-16-2008 | Industry, Real Estate & Constr …
PMForum, Inc.
Tom Taylor named PM Ambassador™ in UK
APM Fellow Tom Taylor joins the PM Ambassadors™ Speakers Bureau in England Dallas, Texas — PMForum, Inc. is pleased to announce that Tom Taylor, former Chairman and a Fellow of the Association for Project Management (APM) in the UK, has joined the PM AmbassadorsTM Speakers Bureau. Based in London and with over 30 years of front-line project management experience, Tom advises organizations and speaks on project management throughout the UK.
Comments about openPR
OpenPR ist the nicest and most clearly laid out PR platform I have seen to this day. The press releases are displayed very nicely and clearly and without any unnecessary frills. The updates are fast and the finished release looks appealing and is clearly legible. Even with 16 years of experience one discovers new things from time to time. Congratulations!
Gabriele Ketterl, Director Marketing & PR, Menads