The development of Leipzig - documented in a digital book! 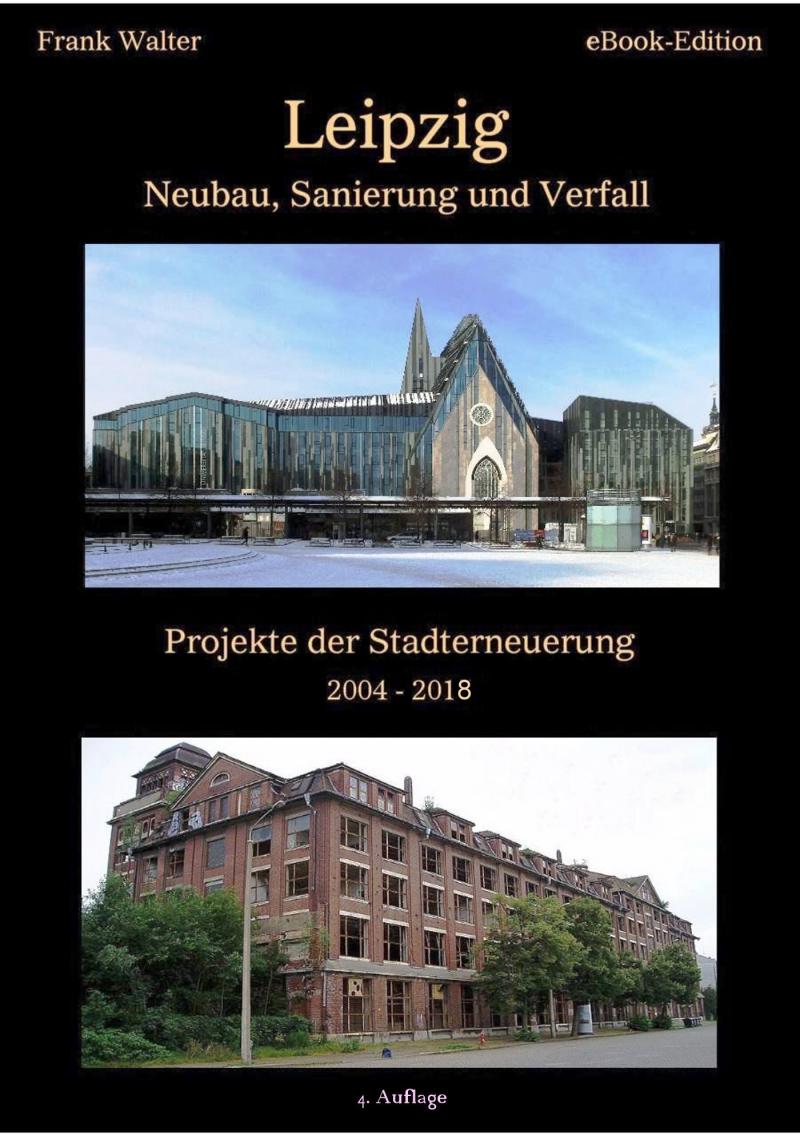 For the rapid development of Leipzig into a prospering city you will find countless examples as a visitor to the city. To name only a few important aspects - a closed inner city, apart from a few objects still being reconstructed or under construction, a well-developed public transport system successfully supplemented by the City Tunnel, a steadily growing supply of hotel capacities, thriving retail trade. All this meant that the population of 2004 with 498491 inhabitants increased to 584775 inhabitants in 2018.Tourism is booming, too. Thus, the number of overnight stays increased from about 2.7 million in 2004 to 3.3 million in 2017. According to this situation, the urban development concept envisages to realize numerous large-scale construction projects in the next few years. This will create apartments for thousands of people. Notable examples are e.g. the construction of a new district in Eutritzsch on the site of the former Freiladebahnhof and the development of an area at the Bavarian station, the so-called City-Oasis. These two projects alone cover an area of ​​about 45 hectares. But also at the Goerdeler-Ring, and the Wilhelm-Leuschner-Platz construction projects are planned.Further interesting construction projects are about it still in the execution phase or in the construction planning. The development of the eastern side of Leipzig Central Station and the planned development of the area of ​​the former circus Eros. Maschinelle ÜbersetzungThe development status of the city reached at the end of 2018 can be traced in the 4th revised edition of the eBook "Leipzig Neubau, Sanierung und Verfall". This 4th edition has been published in the formats PDF (197 pages), ePub (247 pages) and Mobipocket. And here are the ISB numbers: ISBN: 978-3-95963-566-0 (ePUB) ISBN: 978-3-95963-567-7 (Mobipocket) ISBN: 978-3-95963-568-4 (PDF) The download is on the Ebozon-Verlag (http://www.ebozon-verlag.com/leipzig-neubau-sanierung-und-verfall-von-frank-walter/) and of course on all bookstores such as Hugendubel (https://www.hugendubel.de/de/ebook/frank_walter-leipzig_neubau_sanierung_und_verfall-35632866-produkt-details.html) possible. This eBook is a peculiarity insofar as neither another digital book nor a print edition has been published in this summarized presentation of the Leipzig urban development.private person (Pensioner)Frank Walter Delitzscher Straße 33 04129 Leipzig 03419116990 frankwalter@gmx.net

You can edit or delete your press release The development of Leipzig - documented in a digital book! here

11-05-2011 | IT, New Media & Software
Cuculus GmbH
Cuculus GmbH experienced strong growth: Expansion in Leipzig
Cuculus GmbH, specialist for smart metering and smart home solutions, expands capacity with new development and support center in Leipzig. The opening of the new center is a result of the continuing growth of the software company headquartered in Ilmenau. The center will be opened in November. Cuculus has an outstanding position in the German and European market. With the new location in Saxony next to the headquarter in
08-06-2010 | IT, New Media & Software
LINKIES.
Leipzig/Toronto, 05.08.2010, LINKIES. Management Consulting in Canada
LINKIES. Management Consulting Group (LINKIES.) is heading to North America with a new branch. In cooperation with LINKIES. Unternehmensberatung GmbH in Leipzig, Germany, LINKIES. Management Consulting Canada Inc. will be located in the Greater Toronto Area (GTA). The group has many years experience in the consulting business in Canada and North America, especially with German and European companies, currently operating in Canada. LINKIES. offers a range of consultancy services, covering both
08-13-2008 | IT, New Media & Software
arvato systems
arvato systems in Leipzig: eeis at the Games Convention 2008
arvato systems GmbH, a leading IT service provider for the areas of telecommunications, internet/eCommerce, media and entertainment, is presenting the integrally holistic service platform eeis (Electronic Entertainment Infrastructure Service) in Hall 1, Booth H31 at the Games Convention 2008 (20th to the 23rd of August). eeis is a worldwide one-of-its-kind, modularly constructed combination of numerous services and programs from arvato systems and the renowned massively multiplayer network engine tinCat. arvato systems is
09-12-2006 | Arts & Culture
Matthias Haase
Tour of the Galleries in Leipzig results in SMS Installation
Dresden, 12.09.2006. After the Tour of the Galleries in Leipzig last Saturday the New Media artist and painter Matthias Haase installed a SMS chat system at a party labelled „I'm Lovin' it“. The event was hosted by a new night club known as „BAR“ located in building number 10 at Baumwollspinnerei where galleries and exhibition spaces opened new exhibitions that weekend. Next to dancing to electronic music by the Djs
03-16-2006 | IT, New Media & Software
mycitymate S.L.
mycitymate- Stuttgart & Leipzig city guides available now
mycitymate collaborates with hundreds of travellers and locals to host online city guides with the latest reviews on restaurants, bars & clubs, accommodation, shopping and more. This month, 2 new cities have been added to the already extensive library of 11 European cities. You can discover the best events and venues in Amsterdam, Berlin, Dublin, Hamburg, London, Munich, Barcelona, Cologne, Frankfurt, Madrid, Rome and now Stuttgart & Leipzig too! The
Comments about openPR
9 o'clock: discuss press release with client, 10 o'clock: submit release to openPR, within the briefest possible time release is published and displayed in a prominent place on openPR.de. I am thrilled!
Zehra Spindler, Calypso Now! - Communication Agency