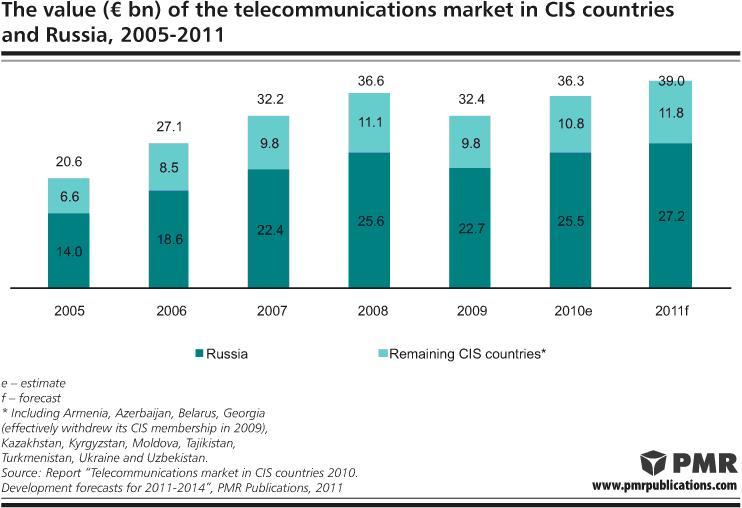 The CIS telecommunications market is recovering after the crisis period. In euro terms, the market closed 2010 with double-digit growth, chiefly due to the improvement of macroeconomic indicators and the gradual strengthening of local currencies. This year, the market is also expected to increase fuelled by further development of broadband services.Russia leading The telecommunications market in Russia is by far the largest among all CIS countries. Revenues generated only on the Russian market represent approx. 70% of the total value of the CIS telecommunications market, which means the share of the remaining eleven countries all together is 30%. According to the latest data by PMR, the value of the whole CIS telecoms market amounted to €36.3bn in 2010, of which €25.5bn was the value of the Russian market while the remaining €10.8bn accounted for the other CIS countries.The telecoms market in CIS will continue to grow in 2011. By the end of the year the combined value of the market will reach €39bn, of which €27bn will represent Russia. The region will benefit from a further expansion of broadband in the residential sector as well as a growing demand for data transmission services. Factors behind broadband’s rapid growth will be the relatively low broadband penetration, decreasing tariffs and the development of new technologies in the market.CIS countries differ Even setting aside Russia, it is important to point out that the CIS region is far from homogeneous. The telecommunications markets in the CIS countries are different by size, maturity, availability and quality of services. Market attractiveness for the investors, and as a result the development of fixed or wireless infrastructure in the countries, is closely connected with the geographical conditions and economic development of CIS states, but also with liberalisation of the regulatory environment and cultural differences. The three biggest telecommunications markets in the CIS region besides Russia are Ukraine, Kazakhstan and Belarus followed by Uzbekistan and Azerbaijan. However, by per capita spending, the regional leaders are Kazakhstan, Belarus and Moldova. Mobile telephony remains the biggest segment of the telecommunications market in all of the CIS countries. The ISP segment remains the least developed and its share in the value of the telecommunications market is still low. On the other hand, the provision of internet access was booming in 2009-2010 in spite of the economic crisis, presenting providers with the possibility to compensate for declining revenues from the fixed-voice services. The ISP market in CIS region is still far from saturation. ISPs have significant capacity for further growth, even in the most advanced CIS countries.The problem of most of the CIS countries, especially in Middle Asia, is that they have limited development of copper telephone networks, which restricts the growth of ADSL lines and blocks investments coming in this area. Therefore, a solution of last mile access in the CIS is offered by mobile operators, which have launched UMTS networks. “It is also interesting to note that for Russian major mobile operators, CIS countries represent a valuable testing area for trials of new technologies and network developments. The LTE trial network rolled out last year by VimpelCom in Kazakhstan is one of the examples of those” – Pawel Olszynka, a PMR analyst, comments. In Belarus and Moldova, 3G became an auxiliary technology used in parallel with fixed broadband. In Middle Asian countries and Caucasus states, wireless access plays an important role, as for many users it is the only way to be connected to the internet. The problem is the poor capacity of external gateway and backbone networks while domestic informational resources are limited. Therefore, internet access in Middle Asian countries with limited external data exchange capacity is – in spite of the available wireless broadband – also extremely expensive. Last but not least, it should be added that in the past the construction of WiMAX networks was announced in most of the CIS countries and in Belarus and Ukraine this technology has already been launched, however, it has not gotten mass recognition so far.As it is indicated in the report entitled “Telecommunications market in CIS countries 2010. Development forecasts for 2010-2014”, over the next four years PMR expects telecommunications markets in CIS countries and Georgia to experience dynamic growth driven by fixed and mobile internet access services. The main competition will take place between fixed and mobile operators for the internet users. The share of ISP services in the telecommunications revenues will grow. Finally, the development of telecommunications markets in the CIS countries over the next four years will be driven by the expansion of Russian telecommunications companies in the neighbouring states. The Russian telecommunications market is by far more matured and especially mobile operators have already started to look at the possibilities for further expansion.PMR (www.pmrcorporate.com) is a British-American company providing market information, advice and services to international businesses interested in Central and Eastern European countries as well as other emerging markets. PMR's key areas of operation include business publications (through PMR Publications), consultancy (through PMR Consulting) and market research (through PMR Research). Being present on the market since 1995, employing highly skilled staff, offering high international standards in projects and publications, providing one of most frequently visited and top-ranked websites, PMR is one of the largest companies of its type in the region.PMR Publications ul. Dekerta 24, 30-703 Krakow, Poland tel. /48/ 12 618 90 00, fax /48/ 12 618 90 08 Contact Person: Anna Rojek, marketing@pmrcorporate.com www.pmrpublications.com

06-14-2012 | Business, Economy, Finances, B …
PMR Ltd.
Roads to be a driving force of the Bulgarian construction market
Access to EU funding and the investments in the energy sector are the predominant factors determining the development of the Bulgarian civil engineering construction sector in the next three years. It is expected that this segment will lead the development of the construction market in Bulgaria. According to the research company PMR’s latest report, entitled “Construction sector in Bulgaria 2012 – Development forecasts for 2012-2014”, the absorption rate of the programmes
08-19-2011 | Industry, Real Estate & Constr …
PMR Ltd.
Polish road construction market to grow nearly 25% in 2011
Activity in Polish road construction will peak in 2011 and 2012. Driven by substantial capital expenditure by the General Directorate for National Roads and Motorways (GDDKiA), the value of roadwork will exceed PLN 30bn (€7.5bn) already in 2011. Delays in the implementation of projects related to Euro 2012 and sustained investments in local roads will prepare the road market for the anticipated period of reduced spending on the construction of
08-19-2011 | Industry, Real Estate & Constr …
PMR Ltd.
Construction industry in Romania expected to stabilise in 2011
Prior to the start of the crisis, the Romanian construction industry was one of the most vibrant in the European Union. This changed dramatically in 2009, when construction output fell by 15%, with a similar reduction following in 2010. The current year should finally lead to a measure of stabilisation on the market, but growth is not likely to return before 2012. Romania was the region's best performer in construction a
08-19-2011 | Health & Medicine
PMR Ltd.
Pharmaceutical contract manufacturing and API sourcing: why not Central Europe?
At present, only a few companies based in Central Europe and the Balkans emphasise their contract manufacturing and API sourcing services. There is relatively strong competition from companies from the Far East and from Western Europe. On the other hand, the potential of the region seems to be considerable, with Poland and the Czech Republic still the most attractive locations, according to the latest report from PMR, a research and

09-04-2018 | Advertising, Media Consulting, …
CIS Chip Market
CIS Chip Market Overview Till 2018-2023
Future Market Reports on Global CIS Chip 2018 Research Report presents a professional and complete analysis of Global CIS Chip Market on the current market situation. The Global CIS Chip Market 2018 report includes CIS Chip market Revenue, market Share, CIS Chip industry volume, market Trends, Growth aspects. It analyses the important factors of the CIS Chip market based on present industry situations, CIS Chip market demands, business strategies utilized
08-07-2017 | Industry, Real Estate & Constr …
GBC
CEE & CIS Downstream Project Management Conference,
Successful implementation of complex revamp and construction projects without budget overruns and schedule slippage is the dream of any refinery manager. VPs and Project Managers of companies such as LUKOIL, GAZPROM NEFT, MOL, SLOVNAFT, SOCAR and KAZMUNAYGAZ will take part in the 4th CEE & CIS Downstream Project Management Conference, 2- 3 November 2017 in Vienna, to exchange best practices in the project execution and capital efficiency. The conference includes • A technical
05-11-2017 | Business, Economy, Finances, B …
GlobeMetrix
Global cis,cis-Muconic Acid Market Forecast 2017 - 2022 - Myriant, Amyris, Santa …
According to cis,cis-Muconic Acid Market Report by Market.Biz: China cis,cis-Muconic Acid market sales revenue and India cis,cis-Muconic Acid market sales revenue is expected to register CAGRs of --.-- % and --.--% respectively over the forecast period. cis,cis-Muconic Acid consumption in the ASEAN region's growth rate of --.--% outperforming many countries in the Europe and Americas on cis,cis-Muconic Acid scinario. Middle East cis,cis-Muconic Acid market and Africa cis,cis-Muconic Acid market, followed
09-19-2016 | Health & Medicine
Syndicate Market Research
CIS Insulin Market reports, 2015 – 2020
Insulin regulates metabolism by creating the pancreas that allows your body to use glucose from carbohydrates in the food. Insulin helps to keep your blood sugar level from getting too high or too low. Insulin enables the entry of glucose in the cell and maintains level of blood glucose. In diabetes treatment, patient need insulin injections to allow body to process sugar and avoid complications from hyperglycemia. Request Sample Report
01-15-2014 | Logistics & Transport
RZD Logistics
Russian Railways Logistics delivers confectionery to CIS
Saint-Petersburg, January 14 - Russian Railways Logistics (RZDL) started LLC Chipita Saint-Petersburg confectionery delivery to Kazakhstan and Turkmenistan. In the framework of this project RZDL provides a full range of logistics services including truck forwarding to the loading station, terminal handling and repackaging, consigner services and timely delivery to the final consignee. The first confectionery batch was dispatched in December 2013 in cooperation with the Directorate of terminal and warehouse complex
02-11-2012 | Health & Medicine
PMR Ltd
Clinical market in CIS to exceed €700m in 2014
Clinical trials in the CIS countries have been developing in a positive fashion (with the exception of Russia, whose development slowed for a while as a result of significant changes in regulation). The average increase in value is expected to reach 14% and the average increase in volume approximately 13% between 2012 and 2014, according to the latest PMR report “Clinical trials in CIS countries 2012 – Russia, Ukraine, Belarus
Comments about openPR
I can't but agree to the positive statements about your portal: easy to use, clear layout, very good search function, and quick editing!
Jens O'Brien, Borgmeier Media Communication