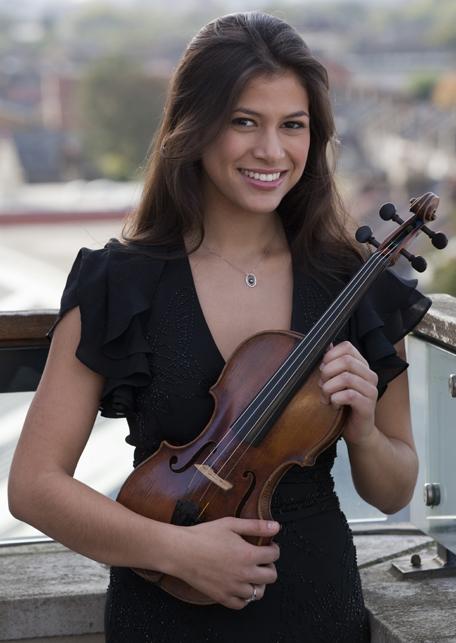 Chicago, IL -- Elena Urioste, one of the most sought-after young violinists in the country, will join the University of Chicago Symphony Orchestra on its upcoming program in partnership with The Soviet Arts Experience, “The Decade of The Great Patriotic War,” for one night only: Saturday, March 5 at 8 p.m. in Mandel Hall. Urioste, who will perform Shostakovich’s Violin Concerto No. 1 in A minor, replaces Hahn-Bin, who canceled his performance due to tendonitis. Myaskovsky’s Symphony No. 22 in B minor, “Symphonic Ballad”, opens the program. This concert concludes a weeklong residency during which Urioste will engage with the campus and surrounding community in outreach endeavors. Urioste made her Chicago debut with the Chicago Symphony Orchestra in April 2010 with a performance of Vaughan Williams’ The Lark Ascending, which earned her praise from John von Rhein, Chicago Tribute, (“The gifted young violinist, Elena Urioste, in her Chicago Symphony Orchestra debut, charmed the audience with her lyrical sensitivity.”), Andrew Patner, Chicago Sun-Times, (“If anyone has played solo pianissimos at Orchestra Hall with the hypnotic delicacy that Urioste offered, I must have been away. Let’s hear her again soon.”), and Lawrence A. Johnson, Chicago Classical Review, (“From the hushed rustle of her opening bars, the 23-year old violinist played with inward delicacy and expressive poise, her communicative performance aided by the sweet, penetrating sound of the $18 million “Vieuxtemps” Guarneri, on loan from the Stradivari Society for these concerts.”).Elena Urioste, featured on the cover of Symphony magazine as an emerging artist to watch, has been hailed by critics and audiences alike for her lush tone, the nuanced lyricism of her playing, and her commanding stage presence. Since first appearing with the Philadelphia Orchestra at age thirteen, she has made acclaimed debuts with major orchestras throughout the United States, including the Cleveland Orchestra, the Boston Pops, the Buffalo Philharmonic, and the Atlanta, Baltimore, Detroit, Pittsburgh, Richmond, San Antonio, and Sarasota symphony orchestras. In Europe, she has appeared with the London Philharmonic Orchestra and Hungary’s Orchestra Dohnányi Budafok. Urioste is a graduate of the Curtis Institute of Music, where she studied with Joseph Silverstein, Pamela Frank, and Ida Kavafian. She completed graduate studies with Joel Smirnoff at The Juilliard School.Admission to “The Decade of The Great Patriotic War” will be collected at the door ($10 adults/$5 students and children under 12). For more information, call 773.702.8069 or visit music.uchicago.edu/events. Mandel Hall is located at 1131 E. 57th Street in Hyde Park, Chicago. Elena Urioste’s appearance with the University Symphony Orchestra is sponsored in part by the Center for the Study of Race, Politics, and Culture at the University of Chicago.The 100-member University Symphony Orchestra presents an ambitious season of six major concerts per year. The Department of Music’s thirteen performance program ensembles present over a hundred stimulating and varied concerts each year.Rashida Black 1010 E. 59th Street Goodspeed Hall Chicago, IL 60637

02-14-2013 | Arts & Culture
Dieter Topp
Weekend with Richard Wagner and Brno Philharmonic Orchestra in Munich
The Brno Philharmonic Orchestra will perform three concerts at the beginning of May in two largest concert halls in Munich, the city of music. Together with the Münchner Opern- und Sängerfreunde agency, the Brno Philharmonic Orchestra intends to play these concerts to commemorate the 200th anniversary of the birth of Richard Wagner and the 130th anniversary of his death. The concerts will include mainly lesser known compositions of this genius
08-09-2011 | Arts & Culture
Erickson Living
Greenspring Resident Receives Lifetime Award from the Fairfax Symphony Orchestra
SPRINGFIELD, VIRGINIA – Emile “Mickey” Zimmerman, currently a resident at Greenspring retirement community, remembers playing in the Fairfax Symphony Orchestra’s (FSO) first venue at Annandale High School. Zimmerman, who helped to form the group in 1957, was the orchestra’s first Concertmaster when they acquired a permanent concert venue at George Mason University. Zimmerman retired from the FSO in 1991 and was recently presented with the Dorothy Farnham Feuer
10-29-2010 | Leisure, Entertainment, Miscel …
Ticketloot Inc
Trans-Siberian Orchestra
Winter season is about to begin and Christmas day is approaching near and so high is the excitement of Americans to celebrate the cold weather along with Christmas holidays in full swing. The Trans-Siberian Orchestra famous for the presentation of traditional Christmas songs is again ready to put the stage on fire. TSO yearly plans it winter tours in which different touring groups perform Christmas and other different story songs.
03-10-2010 | Arts & Culture
The Chamber Orchestra of the Triangle
Award-Winning Soprano to Perform at Ballet Meets Orchestra Concert
Andrea Edith Moore Solo a Highlight of the March Chamber Orchestra of the Triangle Program CHAPEL HILL, N.C. (March 9, 2010)—The Chamber Orchestra of the Triangle (thecot.org) will host its Ballet Meets Orchestra concert on Sunday, March 14. The 3 p.m. concert will be held at the Carolina Theatre in Durham and feature award-winning soprano Andrea Edith Moore. “Andrea’s delicate tone accentuates her warmth and grace as an artist,” says Lorenzo
01-12-2009 | Arts & Culture
The Chamber Orchestra of the Triangle
The Chamber Orchestra of the Triangle Concert January 18
Features Works of Haydn, Mozart and Clementi CHAPEL HILL, N.C. (January 11, 2009) – Lorenzo Muti, artistic director and conductor of The Chamber Orchestra of the Triangle (thecot.org), announces today the orchestra will hold its first concert of 2009 on January 18. The 3 p.m. concert will be held in the historic Fletcher Hall at the Carolina Theatre in Durham. The concert will consist of performances of Muzio Clementi’s
11-24-2008 | Arts & Culture
Mahler Chamber Orchestra e.V.
Premiere of the Deutsche Welle documentary series “Orchestra on tour” about …
During a recent project, the Mahler Chamber Orchestra was accompanied by a team from DEUTSCHE WELLE TV which filmed and produced a documentary about the orchestra and its concert tour to Ferrara, Cologne, Thessaloniki and Athens. The documentary will be broadcast as a 6-part series on the cultural program euromaxx from 24 to 29 November. The program will be shown several times each day in German and English. The camera
Comments about openPR
We publish our press releases on openPR.de because we like people who are "open" - just like us.
Frank Obels, CEO, INCONET - Informationssysteme, Communication und Netzwerkberatung GmbH