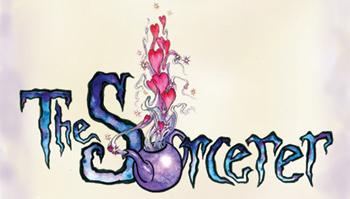 Chicago, IL -- The Gilbert & Sullivan Opera Company of Chicago (GSOC) celebrates its 51st season with a rare production of Gilbert & Sullivan’s, The Sorcerer, a tale of love potions, magic spells, and misbehavior. Sorcerer opens Friday, March 11 at 8:00 p.m. and runs through Sunday, March 13 in Mandel Hall at the University of Chicago. The GSOC last produced Sorcerer in 1996.This infrequently produced comic tale, which predates yet echoes the wizardry of Harry Potter, is Gilbert & Sullivan’s second full-length collaboration, first produced in London in 1887. Sorcerer is the story of a well-meaning but misguided hero who hires a sorcerer to administer a love portion to an entire village, resulting in everyone falling in love with the wrong partner. Filled with playful satire of the attitudes and customs of Victorian England, this modern production includes dramatic special effects and exquisite costumes.Stage director Thrisa Hodits returns to the Company for her fifth engagement, joined by conductor Timothy Semanik, the newly appointed Director of the University of Chicago Chamber Orchestra. Producers Calvert Audrain, Trip Driscoll, and Nancy Levner bring together a very talented cast including some of the GSOC’s favorites from past productions as well as several outstanding newcomers. Performances of Gilbert & Sullivan’s The Sorcerer take place at Mandel Hall, 1131 East 57th Street, from March 11th through the 13th. Friday and Saturday performances begin at 8 p.m., with a Sunday matinee at 2 p.m. Ticket order forms can be downloaded at music.uchicago.edu/events. Beginning March 1, single tickets can be purchased by calling the ticket hotline, 773.702.9075, 12 to 4 p.m. Monday through Friday. Patron tickets are $50; general admission tickets are $20 for adults and $5 for students and children under age 12. Mandel Hall is located at the southwest corner of University Avenue and 57th Street in Hyde Park on the University of Chicago campus. 2011 marks the 27th consecutive year the proceeds from this annual Gilbert & Sullivan production will benefit the Department of Music’s flourishing performance program, whose thirteen ensembles present over a hundred stimulating and varied concerts each year on Chicago’s South Side.The Gilbert & Sullivan Opera Company, Inc. is a non-profit, community arts organization dedicated to performing the works of Gilbert & Sullivan to the highest artistic standards. GSOC has been a mainstay of Chicago’s Hyde Park cultural scene since it was founded in 1964 by three local G&S fans: Nancy Lorie, Bob Ashenhurst, and Roland Bailey. GSOC is supported by member donations, ticket sales and local grants.Rashida Black 1010 E. 59th Street Goodspeed Hall Chicago, IL 60637