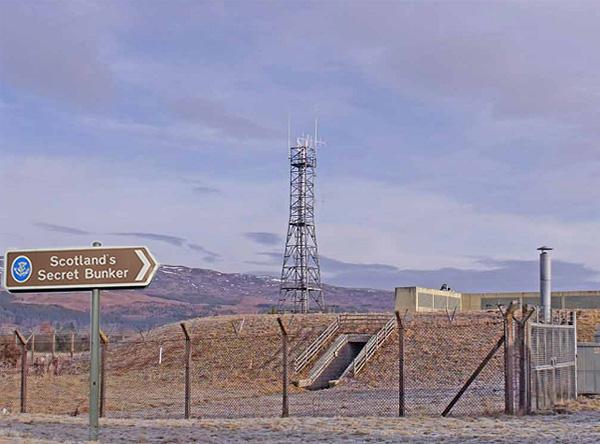 A Cold War nuclear bunker in Scotland has been put on the property market by its owners, Comrie Development Trust (CDT).The nuclear bunker is located beneath the rolling Scottish hills of the former Cultybraggan Camp, over a mile south of the town of Comrie and within fifty miles of Edinburgh and Glasgow.The former military installation was built in 1939 and played host to some of the most notorious Nazi prisoners of war during the Second World War.At the end of the Second World War the camp was turned into an Army training area, until 1960 when it became the Royal Observer Corps nuclear monitoring post.Originally commissioned by the Scottish Parliament, the huge underground bunker housed over one hundred and fifty staff who worked to protect England and Scotland from nuclear, biological and electromagnetic attacks.It was the most technologically advanced bunker built during the Cold War, complete with a BBC studio, a canteen, a telephone exchange and dormitories.Construction cost in the region of US$48.2 million, which would be around US$144.4 million in today’s money, allowing for inflation.Once the bunker was completed, however, the Cold War quickly came to an end and it was no longer needed.In August 2007 CDT, a non-profit organisation, bought the Cultybraggan Camp site for £350,000 (US$559,000) with the intention of redeveloping it to provide commercial premises for local businesses at competitive rates.Over the last three years CDT has rebuilt the camp and spent a total of US$722,000 on its infrastructure, upgrading the drainage, sewage, electricity, telecoms and water systems.Nine of the camp’s huts and the former mess building have been refurbished and are now being rented to local businesses. Proposals are also underway to equip the camp with a renewable energy system in the future.Since the unusual property was first advertised, the Scottish nuclear bunker has attracted a great deal of interest from all over the world.“Potential purchasers have come from Bermuda, Australia, America, France, Germany, South Africa, Dubai, India, Spain and the UK and we have several interested parties lined up for viewings on the 9th, 10th and 11th February. Possible uses suggested for the bunker have ranged from an antiques or wine store to a residential home to a telecommunications centre. We have even had interest from someone who would use it as a doomsday shelter,” commented Andrew Black, Associate to Carter Jonas who are marketing the property.“This really is a fascinating installation which would suit a variety of uses including high security computer data storage, a disaster recovery facility or even a temperature controlled fine wine store. This is the first step in a historic route as the Trust is calling for interested parties to come forward and develop this truly unique building set within the magnificent backdrop of the surrounding hills and glens on the edge of the Loch Lomond and Trossachs National Park.” Black concluded.For anyone interested in making an offer the bunker has a guide price of £400,000 (US$642,000).Read more from the source here... http://blog.oceanvillasgroup.com/cold-war-nuclear-bunker-for-sale-in-scotland/Rebecca Smith Ocean Villas Group - http://www.oceanvillasgroup.comRebecca Smith is a real estate journalist with more than 15 years experience. She is currently the sales director for Ocean Villas Group (http://www.oceanvillasgroup.com) who specialise in luxury ocean view property investments worldwide.For more Investment news... [url]http://blog.oceanvillasgroup.com[/url]Level 31, 6 Battery Road, Raffles Place, 049909, Singapore

02-15-2017 | Energy & Environment
Utilitywise plc
Water market deregulation in England
The water market in England is deregulating, giving business the chance to tap into savings and other opportunities. Here’s how it will affect your organisation. Water deregulation in England – an aid to navigation In April 2017, water industry deregulation will start in England, giving businesses, charities and public sector organisations the ability to shop around and switch retail service provider. Until now, only non-domestic customers in Scotland and very high water
02-01-2012 | Industry, Real Estate & Constr …
Neschen AG
Neschen closes loss-making plant in England
Bückeburg, 31 January 2012 - The company Neschen AG based in Bückeburg is closing its UK production plant in Basildon in mid-2012. Around 30 employees work at this plant producing self-adhesive products mainly for intercompany deliveries to Neschen AG and its US subsidiary. The plant closure should lead to an improvement in the group's EBITDA of 1.3 million euros from 2013 onwards. The independent British sales company Neschen UK Ltd.
12-15-2011 | Industry, Real Estate & Constr …
What House?
House Prices Fall in England and Wales
According to latest figures issued from the Land Registry, property prices across England and Wales fell by 0.9% during the month of October 2011 with a total annual fall in value of 3.2%. The figures show that this overall monthly decrease in property values is the highest since February 2009 and that the average price of a home now stands at £159,999. Properties in the East of England including new homes
08-19-2011 | IT, New Media & Software
Rich IDSman
Riots in England - who is to blame?
The whole world watched in horror as the riots in the UK reached epic proportions. Images of burning cars, shops being smashed and looted and burning buildings flashed across TV sets throughout the world. It looked like a make believe horror movie except it was real. The vast majority of the vandals were teenagers and kids as young as 12 years old. They were robbing anything and everything they could.
12-22-2010 | Advertising, Media Consulting, …
Gullivers Sports Travel
Cabs to Drive England Fans Cricket Crazy
The International Cricket Council and Gullivers Sports Travel are gearing up cricket fans in England for the ICC Cricket World Cup 2011, which starts on 19 February. Gullivers, the official UK travel agent for the event, is urging fans to get behind the England team and support its mission to bring back the Cricket World Cup from the Asian sub-continent. To drive the point home, more than 150 ICC Cricket World
08-28-2008 | Sports
Patriotsground.com
The New England Patriots fans are increasing
The New England Patriots, commonly called the "Pats" by sports writers and fans, are a professional American football team based in the Greater Boston area, playing their home games in the town of Foxborough, Massachusetts. The team is part of the Eastern Division of the American Football Conference (AFC) in the National Football League (NFL). The owners changed the name from the original Boston Patriots tickets after relocating
Comments about openPR
Your portal is fast, simple, and easy to use. Others may have more functions but they also demand more editing time, you have to preformat the text in order to achieve a good result etc. I think openPR is really fantastic!
Andreas Knepper, wallmedien AG