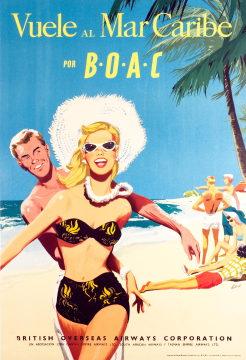 BOSTON – International Poster Gallery presents Winter Break, an exhibition of over 50 original vintage posters, designed to combat the winter blues with advertisements for vacation destinations around the world. The ultimate vintage poster “stay-cation”, the exhibition offers everything from pristine Caribbean vistas to snow-covered Swiss Alps. This diverse exhibition spans multiple periods and genres and includes works by noted poster design titans. The show is free and open to the public and is on view through March 18, 2011 at International Poster Gallery, located at 205 Newbury Street in Boston. Gallery hours are Monday through Saturday 10 am to 6 pm and Sunday noon to 6 pm. Call (617) 375-0076 or visit www.internationalposter.comHighlighting the exhibition’s tropical offerings is a playful 1959 advertisement for British Overseas Airways (BOAC), one of the forerunners of British Airways. The poster, which advertises the sunny beaches of the Caribbean, was produced in response to the advent and subsequent boom of “coach class” travel during the late 1950’s. For the first time, tourists had become as active as government and business travelers and “everyman” destinations like San Francisco, Hawaii, Florida and the Caribbean exploded in popularity. The image shows a carefree couple strutting down a sun-soaked Caribbean shoreline, targeting the airline’s booming younger audience.Also included is a festive poster created to promote the second year of the British Empire Exhibition at Wembley. The historic event attracted a staggering 27 million visitors over 2 years and was largest exposition the world had seen until that point. Its official aim was to encourage trade between member countries of the Empire, with three main exhibition halls for industry, science and the arts. Fifty-six countries participated in the event, which culminated in speech given by Prince Albert, Duke of York. The closing speech was notably disastrous, and is depicted in the newly released Oscar-nominated film, “The King’s Speech”.For winter sports enthusiasts, the exhibition also offers a 1930 poster advertising St. Moritz in the majestic Swiss Alps. By the turn of the century, St. Moritz had become one of the exclusive mountain resorts that would fuel Switzerland’s renown as the “Playground of Europe”. Blessed with 300 days of sunshine, St. Moritz became especially popular with British aristocrats who wished to escape rainy England for a winter in the sunny Alps. In 1930, the resort capitalized on this by creating a smiling sun logo that appeared in many of its posters and promotional materials. This classic, designed by an anonymous artist, is one of the earliest uses of photomontage in travel posters and was produced in an uncommonly large 35 x 50 inch format.In addition to gallery shows and special exhibitions, IPG’s award-winning website, www.internationalposter.com offers the largest, most comprehensive online collection of vintage advertising posters in the world. Originally launched in 1998, the site contains nearly 4,500 images accessible through a powerful search engine.Editor’s Note: • Background and additional digital color images available. • Support for feature development on poster collecting available. • Interviews with gallery owner Jim Lapides are encouraged and parking is available at the gallery for media visits.Exhibition Runs Now Through March 18, 2011Joshua Payne (617) 363 0405 info@fuscofour.com 8 Allenwood Street West Roxbury, MA 02132

12-14-2018 | Industry, Real Estate & Constr …
Manies Construction
Winter Home Maintenance Guide
Keep your home in tip top shape this winter by performing this list of maintenance tasks to keep your family warm & safe all winter long. If you own a snow blower, be sure to check the manual for any routine pre-season maintenance suggestions. Also, make sure you have easy access to your shovel and have plenty of kitty liter on hand to help prevent slips. (this will not harm
03-30-2016 | Arts & Culture
Jeffrey Breslow Gallery
Magnetism | Meg Frazier + Morgan Winter
Chicago, IL - April 15, 2016, 5p - 8p- Magnetism | Meg Frazier + Morgan Winter. The Jeffrey Breslow Gallery celebrates a unique collaborative exhibition of work by Meg Frazier and Morgan Winter. The show, titled Magnetism, represents the unseen yet tactile energy that exists when two distinct styles approach artistic compositions as one. Meg Frazier, known for her bold brush strokes trickled throughout her abstract style, and Morgan Winter,
03-03-2016 | Fashion, Lifestyle, Trends
G2O Spa + Salon
Winter Rescue
WHAT: While spring is almost in the air, the harsh effects of winter can still be felt on skin and hair. This March, G2O Spa + Salon, Boston’s award-winning day spa and salon on Newbury Street, is reversing the winter woes with complimentary treatments that will rescue hair, skin and nails, and spring everyone’s beauty regime back to life.
11-26-2011 | Fashion, Lifestyle, Trends
Enliten, LLC
Enliten's Winter Release 2011-12
Enliten has announced its annual release and sale for Black Friday. The release has over 20 new additions, including women's apparel for the first time in company history. The new release features a collection of basics with their iconic logo and name on t-shirts, hoodies, and crew neck sweatshirts. To accentuate, the crewneck sweaters have detailed stitching across the lateral body and cross stitching at the neckline. For women, V-necks and
05-13-2011 | Fashion, Lifestyle, Trends
Bastyan Fashions limited
Bastyan Autumn/Winter 2011/12
The latest Autumn/Winter collection from Bastyan is a rich mix of sumptuous colours and tactile textures sitting against silhouettes that evoke a nostalgic almost cinematic feel. Owner and founder Tonia Bastyan designs for the modern woman who wants more than just trend from her wardrobe, she offers her a mix of well cut items which transcend seasons and give a feeling of comfort and quality without compromising on design. The coat collection
01-07-2011 | Sports
Destination Vietnam
Hanoi Winter Golf Promotion
Valid from 1Jan - 28 Feb 2011 Discover Vietnam- The undiscovered Golf Destination Mua Dong – Winter of Hanoi is really something special and admirable Hanoi has 4 different seasons which are very different with the South East Asia countries and it is even much different in winter In winter, you could feel the coldness from the wind blowing from North where Vietnam bordered with China especially on the Golf courses. That is why,
Comments about openPR
OpenPR is clearly structured and remains true to its principle of confining itself to the essential parts. OpenPR has proven to be a very good and reliable partner to our media agency: Within the shortest time the releases are online and go down well with the media representatives. The success of OpenPR is reflected in the steadily increasing number of press releases. It is good that OpenPR exists!
Ursula Koslik, Director Marketing & PR, F+W Hamburg