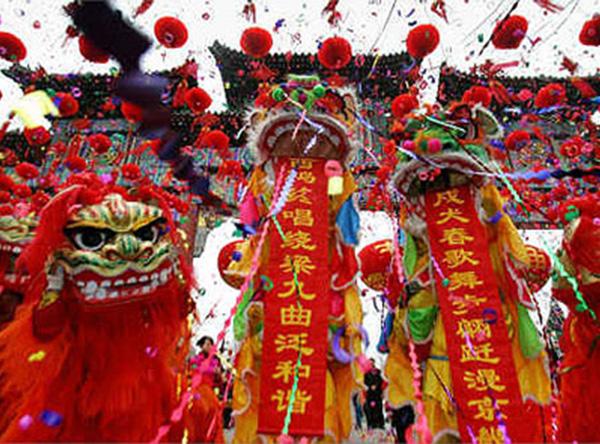 Phuket, Thailand: The streets of Phuket, Thailand are decorated with Chinese lanterns, firecrackers are flashing everywhere and there are dragons in the street, which can only mean one thing - the start of Chinese New Year.For the many people of Chinese descent who call Phuket home, this is the most important celebration of the year and the Tourism Authority of Thailand have gone to great lengths to ensure this year's celebrations are better than ever.The festivities in Phuket will officially kick-off at 4pm on February 3rd with a firework display and an acrobatics show at Sanam Chai in Phuket Town.Traditional Chinese food will be available from more than one hundred food stalls, there will be Lion Dancing in the streets and Kung Fu demonstrations.The fifteen day festival closes with a lantern festival, which is timed to coincide with the first full moon of the Chinese New Year.As with any ancient festival, Chinese New Year has its fair share of superstition and legend.Chinese folklore tells of a mythical beast, 'Nian', who would roam the streets on the same day each year, feasting on livestock, crops and even the villagers themselves.The Chinese villagers were so scared that they would hide in their homes, leaving food on their doorsteps in the hope that the monster would leave them in peace.Some say a young boy dressed in a red cape came to their rescue - others that a wise old man rode the beast out of town.Both stories tell of bamboo being set ablaze, with the flames and loud cracking noises from the fire scaring Nian away.To this day firecrackers and red lanterns are lit to discourage the beast from ever returning.2011 is the year of the Rabbit.According to the Chinese horoscope, people born under the sign of the Rabbit are affectionate, caring and gentle with strong family ties. They hate conflict and enjoy the good things in life.Famous rabbits include Albert Einstein, Frank Sinatra and Brad Pitt.Personally, I was born under the sign of the Rooster, which indicates a flamboyant and feisty personality. People born under this sign are also known for 'telling it like it is' - I think this is probably a good and unusual trait for someone promoting international real estate.Article source... http://blog.phuketoceanvillas.com/phuket-thailand-celebrates-chinese-new-year/Rebecca Smith Phuket Ocean Villas - http://www.phuketoceanvillas.comRebecca Smith is a real estate journalist with more than 15 years experience. She is currently the sales director for Phuket Ocean Villas (http://www.phuketoceanvillas.com) who specialise in luxury ocean view property in Phuket, Thailand.149/12 Srisoonthorn Road, Cherngtalay, Thalang, 83110, Phuket, Thailand

09-07-2017 | Advertising, Media Consulting, …
MarketResearchReports.biz
Chinese Influence on Global Infrastructure
"The Latest Research Report Chinese Influence on Global Infrastructure provides information on pricing, market analysis, shares, forecast, and company profiles for key industry participants. - MarketResearchReports.biz" About Chinese Influence Market This report outlines and analyzes all infrastructure projects around the world in which Chinese companies including owners, financers, and contractors are involved. Summary Throughout the 21st century, China has been a world leader in expanding its infrastructure base, creating the worlds largest high-speed rail
09-06-2012 | Business, Economy, Finances, B …
Chance & Bridge Partners
Chinese Investors Look Abroad
Beijing, China July 30, 2012 – An Outbound Investment Seminar hosted by Chance & Bridge Partners drew a large audience of investors, Chinese SMEs, and international partner law firms. Many Chinese investors and companies are looking to diversify their holdings and enter new markets. This has led to an increase in cross-border investment, banking, consulting, and legal services for the Chinese clients. Many of these areas were addressed during the
01-14-2011 | IT, New Media & Software
Host1Plus
Host1Plus enters Chinese market
London, United Kingdom, January 14, 2011 - Host1Plus, a London based international hosting company has started its operations in Chinese market. The services will be managed from Singapore. Host1Plus has contracted with one of the best data centers in Singapore. This deal allows Host1Plus providing the locally bases services in main language of China. The Chinese support will operate 24/7. The Chinese version of the website is http://cn.host1plus.com in Chinese Simplified
04-27-2010 | Energy & Environment
MWM GmbH
MWM ‒ Chinese Web Site Online
Mannheim, April 26, 2010 In mid-April, a new Web site of MWM GmbH in Chinese went live. However, the new domain with the Internet address mwm.cn is not merely a Chinese translation of the corporate Web site mwm.net. In addition to general information about the Mannheim-based company, the site also features special content elements for the Chinese market. The site contents are also available in English. MWM, a tradition-rich company established
07-13-2009 | Arts & Culture
Yingru.com
About Chinese Calligraphy
Derived from the Greek words for "beauty" and "writing", calligraphy is a very old art. Usually the necessary tools for writing calligraphy are paper, quill and ink. Chinese Calligraphy is based on Chinese characters that are handwritten on paper as well as bones and plates of clay or stone using a brush or a knife (seal carving). In the broader sense calligraphy is a play of brush strokes both, in the
10-07-2008 | Business, Economy, Finances, B …
Questrade Inc.
Questrade launches Chinese outreach initiative
Toronto, ON (October 8th, 2008) – Questrade Inc. today announced a new initiative for the Chinese-speaking community. This includes: the Questrade corporate website in traditional and simplified Chinese. The site includes pricing and rates, trading platforms, investment products and services, security and privacy, and contact information. Also available is Questrade’s live help tool, which allows clients to chat instantly online with client services representatives in simplified and traditional Chinese. Edward
Comments about openPR
OpenPR ist the nicest and most clearly laid out PR platform I have seen to this day. The press releases are displayed very nicely and clearly and without any unnecessary frills. The updates are fast and the finished release looks appealing and is clearly legible. Even with 16 years of experience one discovers new things from time to time. Congratulations!
Gabriele Ketterl, Director Marketing & PR, Menads