New network invites institutions and companies to debate about 360° projections 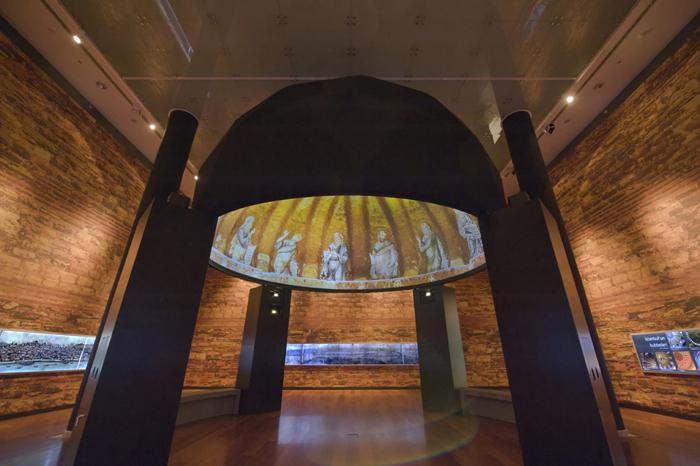 Getting closer to the Holodeck – The Fraunhofer Institute, the Cornelsen publishing house, media.net, UFA Lab and many other players from Berlin and the region have come together in the innovation forum 360°lab and are inviting to open theme forums. Initiator of this development laboratory is the Berlin based company Zendome. It is supported by the German Federal Ministry for Education and Research as part of the innovation initiative "Entrepreneurial Regions”. The “Home Hood” by the students of the Hasso Plattner Institute is a mobile hood which projects individually programmable images above the sick beds of dementia patients in order to improve their well being. The “Collaborative Space” will make it possible for teams to visualize given projects as concrete imageries during meetings. In relaxation and regeneration spaces, visitors will experience unknown cultures which are transported to them via installations, sound and olfactory means. 360° projections, surround and other technologies create virtual worlds which can be experienced with all senses. The booming market for computer games cannot be imagined without them anymore, film and medicine are increasingly incorporating them, too. “We have made the experience that 360° projections are also becoming increasingly important in marketing and product presentations”, says Gordian Overschmidt, managing director of the ZENDOME GmbH. As leaders in innovation of geodesic event cupolas, the Berlin based company focuses on creating new synergies and spatial experiences. Because the Berliners have recognized the need for further and new developments in this area, they have now initiated the development of the first 360° network. It wants to create new impulses for marketable products and services in the areas of software, hardware and content. Already renowned institutions and companies such as the Cornelsen publishing house, the Fraunhofer First Institute, Fraunhofer Heinrich Hertz, the media.net berlinbrandenburg, the UFA Lab, the FH Potsdam study branches of design, Neue Sentimental Film, SkySkan Europe, C.A.I. Systems GmbH and many other agencies and companies have joined the network. The 360°lab is organising seven theme workshops on six days in February and March 2011. They are meant to open the discussions on different aspects of immersive spatial experiences and open new impulses on same. All companies, freelancers and institutions from this business - no matter what size or number of employees – are herby invited to join these open forums. During the first four events the possibilities and visions for contents (marketing, entertainment, medical and education) will be developed. These visions will be taken into the software/ production (recording technology, visual effects, 360° sound systems) and hardware/ distribution (playback technology, event spaces) forums. Up to date development and requirements derived from the forum results will be the basis for the last topic of business cases. Here, possibilities of realisation and economic success of developed projects will be evaluated in order to support them all the way to a marketable point. During a two day final event in April 2011 the results and ensuing next steps will be presented to a wide audience.This multi functional development laboratory for immersive 360° experiences is explicitly being started at the media site of Berlin-Brandenburg, stronghold of film and music production. Berlin boasts high quality production facilities, is a founding city for innovative companies in the areas of web 2.0 and mobile entertainment as well as a site for digital entertainment. The region is home to the leading Gamecluster with around 30 game developers, producers and publishers. www.360lab.netUPCOMING DATES / WORKSHOPS / FINAL EVENTWe will gladly provide you with all the contents and information about the venues.Workshop Content-Development for 3600-Systems (16.02. + 18.02.2011) Organisation: UFA Lab Content.wrap marketing Content.medical Content.entertainment Content.education Workshop Software and Hardware for 3600-Systems (10.03. + 11.03.2011) Organisation: Fraunhofer FIRST • Camera systems • Tools for Computer animation and Compositing • Playout systems • Interaction/ Games • Audio • Distribution, Standards • Domes • Projection systemsWorkshop Business Cases (2 evenings, 17.03. + 24.03.2011) Organisation: media.net berlinbrandenburgFinal Event (11.04. und 12.04.2011)ZENDOME - Extravagant. Mobile. Mechanically perfect.Since 2004 and as the first office of its kind, the Berlin company has furthered the quality development of geodesic structures for the event market in Europe and thus helped its spreading use within the MICE market. All features and the patented Advanced Frame Structure System have been developed according to the requirements of event marketing and have made ZENDOME unmistakably the first address in mobile architecture for companies looking for individual solutions for their brands. The exclusive location offers space for ideas, for road shows, brand presentations, promotion, for corporate events ranging from consumption to art, sport or city marketing as well as integrated part of gaming applications and film productions in wrap marketing combining outdoor advertising with One-to-One communication due to its fully printable membrane. ZENDOME feels part of the long tradition of efficient architecture which started with the Berlin engineer Walther Bauersfeld who built the the first geodesic cupola worldwide with the Zeiss Planetarium in Jena in 1923. ZENDOME manufactures the geodesic domes following traditional crafting from powder coated and galvanized steel in Germany.Robin Britta GeorgZENDOME GmbH Schwedter Strasse 34a 10435 Berlin tel +49 (0) 30 473 77 628 fax +49 (0) 30 473 77 629

02-22-2011 | IT, New Media & Software
ZENDOME GmbH
Successful kick-off for the 360°lab
The 360° lab started with a great kick-off on Wednesday. 30 participants from science and the economy came together at the Berlin UFA Lab in order to connect during the four workshops focussing on 360° content. For two days the areas of entertainment, education, marketing and medical inspired new ideas, visions and contacts with much energy and fun. The result is an impressive range of new perspectives for the 360° idea. An inspiring
09-10-2009 | Advertising, Media Consulting, …
ZENDOME GmbH
How to use Wrap-Marketing for new interactive ways of event marketing
Soccer, Golf and other Sports are still responsible for the largest part of sponsoring turnover with German companies – this is the result of a new study by Ipsos, TNS Sport commissioned by the Pilot media GmbH. All in all however, the study also found out that the economic crisis lead to sponsoring budgets being reduced by 10 per cent. At the same time, EventKlima looked at the market for
12-17-2008 | Advertising, Media Consulting, …
ZENDOME GmbH
Awarded Temporary Architecture
On the 15h of December the publisher “Süddeutsche Zeitung Verlag onpact GmbH” hosted the German Awards for Three Dimensionality in Munich. The young Berlin company ZENDOME, manufacturer of Mobile Event Architecture made from Geodesic Structures, was there. In the competition for the German Three Dimensionality Award (DP3D) “Goldene Flame 2008”, the Berlin company Zendome was nominated for the Berlin Design Dome. Together with the partners Hidden Fortress, Coordination Berlin and Create
10-31-2008 | Leisure, Entertainment, Miscel …
ZENDOME GmbH
Temporary Architecture for James Bond Premier Event
Mobile Event Architecture by the Berlin company ZENDOME supports the German Premier of the 22nd James Bond film on 3rd November 2008. The Berlin company ZENDOME provides mobile architecture for the premier the James Bond film “A Quantum of Solace”, on 3rd November 2008, the most important film adventure of the year. Sony Pictures presents the German premier at the Potsdamer Platz where Daniel Craig brings glamour to the capital as

11-22-2016 | Arts & Culture
gisela graf communications
Architectural Guide Berlin
With additional contributions by Philipp Meuser and Martin Pueschel In no other place in Europe have changing ideologies and differing urban planning models left such a far-reaching mark as in Berlin. The German capital enables the reader to make a literal journey through history. In the shape of four excursions, the Architectural Guide Berlin presents prominent architectural highlights from Kurfürstendamm in the West to the prefab housing estates of the East. The
11-28-2014 | IT, New Media & Software
arvato systems
Premises Berlin
Third inCOMMERCE conference on November 27 at the Bertelsmann Commerce Without Boundaries • Renowned speakers provide insights into their companies’ digitization projects and explore current developments on the international markets • Presentations and case studies from Vorwerk, E-Plus and Tesco (arvato Systems, hybris) Gütersloh and Munich – International e-commerce and best practices in the e-commerce sector are the focal themes of this year’s inCOMMERCE conference on November 27, 2014 in Berlin. For the
08-27-2013 | Tourism, Cars, Traffic
citystay hostel
citystay hostel Berlin gets ready for the 40th Berlin Marathon
As every year, the Marathon is fully booked and we at citystay hostel, just next to start and finalline are getting ready for the runners, staying with us. If you are not running the marathon, but like to get the feeling for the international crowd doing the run, just visit us for a beer, coffee or stay during the marathon with us. Some beds are still available. We are happy
11-07-2012 | Business, Economy, Finances, B …
Neschen AG
Berlin local and digital
A10 shopping centre in Berlin: Wallpaper is an attractive wall covering for the retail trade Bückeburg, 7 November 2012 - Visual attractions are a proven means of drawing customers into shops. As a result the operator of the A10 shopping centre in Berlin chose customised printable Erfurt CA wallpaper from Neschen. ECE took the decision to use wallpaper and in particular the Erfurt CA wallpaper at an early stage. "As
04-27-2010 | Tourism, Cars, Traffic
Hotel Berlin, Berlin
Chef at Hotel Berlin, Berlin second in world championship
Sous-chef Susanne DeOcampo-Herrmann wins silver with Germany's national team of chefs Since Friday, the Hotel Berlin, Berlin has now a world champion silver mdealist among its ranks in the person of Susanne DeOcampo-Herrmann. The hotel's sous-chef won the silver medal at the Culinary Challenge in Singapore together with Germany's national team of chefs. The competition, which is only held every four years, is regarded as an ideal opportunity for leading figures
04-27-2010 | Tourism, Cars, Traffic
Hotel Berlin, Berlin
Happy Birthday Hotel Berlin, Berlin
On the 26th of April, the Hotel Berlin, Berlin celebrated its 52nd Birthday. Looking back at such a great history and at the same time being creative and innovative is something that this house incorporates every day. The hotel combines a long tradition with modern settings. It can look back at an exciting past and towards a promising future. Many heads of State have chosen the Hotel Berlin for their stay
Comments about openPR
We publish our press releases on openPR.de because we like people who are "open" - just like us.
Frank Obels, CEO, INCONET - Informationssysteme, Communication und Netzwerkberatung GmbH