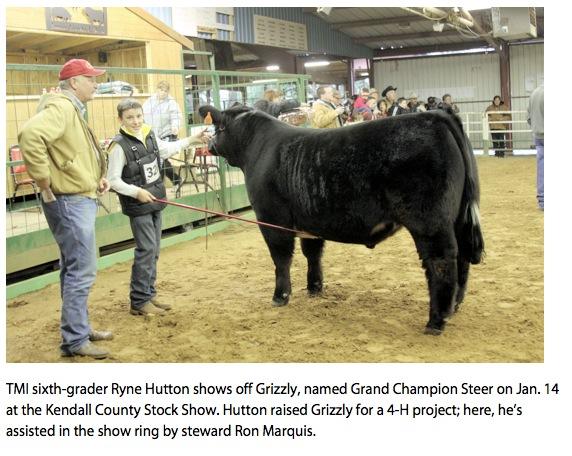 Ryne Hutton, a sixth-grader at TMI – The Episcopal School of Texas, was awarded Grand Champion Steer of the Show for his steer Grizzly on Jan. 14 at the Kendall County Stock Show in Boerne.Hutton, age 12, raised the Simmental steer as a 4-H project, along with a Charolais steer, Dez, that won Reserve Champion at the same show. “I knew Grizzly was going to be special,” he says, “because everyone kept telling me so.” He raised the steers as a project for 4-H, of which he has been a member for more than four years. He also has taken part in rodeos, roping calves. “Raising cattle has always been in my blood,” he says, noting that his brother Hayes, age seven, showed a steer for the first time this year. “(Showing steers) gets easier as you get older,” he says. “It’s a big, strong animal, and when you’re little, your arm gets tired when you’re in the ring.” While he could have sold Grizzly at the Kendall County Show, Hutton kept the steer and plans to take him to the San Antonio, Houston and Fort Worth stock shows. If Grizzly wins a Grand Champion Steer banner at one of the big-city events, Hutton may receive a substantial offer for his prize pet. If so, he says, “I’ll sell him and put the money in my college fund.”Hutton says he has learned responsibility from his 4-H experience of caring for livestock. “I think every kid should do it,” he says. The secret to his success? “You’ve got to love your animal.”About TMI – The Episcopal School of Texas: Founded in 1893, TMI is a private, co-educational, college-preparatory school for grades 6-12, with optional Junior ROTC and boarding programs. For information, visit www.tmi-sa.org or call 698-7171.TMI – The Episcopal School of Texas 20955 West Tejas Trail San Antonio, TX 78257

02-28-2021 | Arts & Culture
BookBuzz.net
Best-Selling Author Davalynn Spencer Releases New Sweet Historical Romance - A C …
Best-Selling Author Davalynn Spencer Releases New Sweet Historical Romance - A Change of Scenery Best-selling inspirational Western-romance author Davalynn Spencer announces the release of “A Change of Scenery,” Book 4 in the ever-popular Cañon City Chronicles series. Set in Cañon City, Colorado, during the heart of its silent-picture era in 1911, “A Change of Scenery” continues the saga of the Hutton family with Cale and Hugh Hutton who were introduced
03-18-2019 | Business, Economy, Finances, B …
Market Research Hub
Caskets Market Size, Sales, Revenue, Market Share and Forecast to 2025 | Top Mar …
The following research report is a compilation of high-end data that has been researched thoroughly to highlight the various trends prevailing across the Caskets market. This study is titled “Global Caskets Market Insights, Forecast to 2025”, which carefully examines several vital factors such as market share, market revenue, market dynamics and competitive scenario active in the target market for the period between 2019 and 2025. A caskets is a funerary
06-13-2018 | Advertising, Media Consulting, …
Battery Analyzers Market
Global Battery Analyzers Market Forecast 2018-2025 Transcat, Cadex Electronics, …
Recently added detailed market study "Global Battery Analyzers Market" examines the performance of the Battery Analyzers market 2018. It encloses an in-depth Research of the Battery Analyzers market state and the competitive landscape globally. This report analyzes the potential of Battery Analyzers market in the present and the future prospects from various angles in detail. The Global Battery Analyzers Market 2018 report includes Battery Analyzers market Revenue, market Share, Battery Analyzers
02-27-2017 | Health & Medicine
B12 Shots Near Me
Digital Nomads Launch Worldwide Medical Directory For Travelers Looking For B12 …
New York, NY - February 24th, 2017 - B12 Shots Near Me opened its doors to the world today with the aim to become the most trusted and comprehensive list of local vitamin B12 providers. The website is an easy way for people to search for providers of B12 shots in their area. The soon-to-come directory will allow people to find the best B12 clinics near them in cities from
03-18-2010 | IT, New Media & Software
TVLesson
Quake Predictor Not a Quack: How One How-To Website Stays Ahead of the Game
It was a quake small enough to have slept through, yet big enough to rouse even some heavy sleepers. But to all Southern Californian residents who both felt and heard about yesterday’s quake, it was too close for comfort. Given the recent quakes of magnitudes 8.8 and 7.0 that have rocked both Chile and Haiti respectively within the past couple months, yesterday’s 4.4 mini-quake at 4 AM was just
03-13-2008 | Energy & Environment
The Renewable Energy Centre
Is John Hutton right or wrong asks The Renewable Energy Centre.co.uk?
A speech which was delivered by John Hutton, Business Secretary in London this week has caused a great deal of concern amongst opposition party leaders and green campaigners. The statement, which highlighted the continued need for and the development of fossil fuel sources for the UK’s energy supplies, has caused many to question the government’s stance on renewable energy and emissions targets. The issue surrounds the E’on power station in
Comments about openPR
OpenPR is clearly structured and remains true to its principle of confining itself to the essential parts. OpenPR has proven to be a very good and reliable partner to our media agency: Within the shortest time the releases are online and go down well with the media representatives. The success of OpenPR is reflected in the steadily increasing number of press releases. It is good that OpenPR exists!
Ursula Koslik, Director Marketing & PR, F+W Hamburg