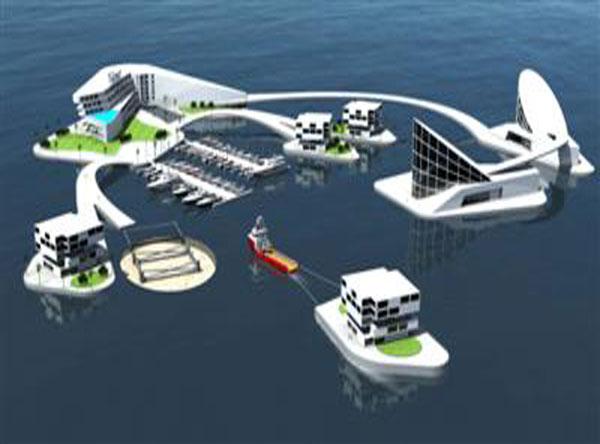 Phuket, Thailand: An ambitious project for Saphan Hin in Phuket has been proposed to Phuket Governor Tri Augkaradacha by Norwegian maritime engineering company, LMG Marin.The project proposes the construction of an on and off shore development, covering a total area of 500,000 square metres and including a hotel, apartments, business centre, park, university and a research institute. Saphan Hin is a large open area, bordering the ocean, at the south of Phuket town and was originally a land reclamation project which provided new land for parks and public facilities.The area is has always been much sought after as it is one of the few remaining areas of sea front land still available in Phuket.Following a site survey and talks with Phuket mayor, Somjai Suwansupapana, LMG Marin intend to carry out a feasibility study at Saphan Hin to determine whether the project will be possible.If Phuket Governor, Tri Augkaradacha, allows LMG Marin to carry out the feasibility study, the property developer estimates that the assessment will take one year to complete. The results will then be passed to the Phuket Provincial Office for approval.A budget of 122.8 million baht (US$4 million) has already been assigned by LMG Marin for the study.The offshore section of the project proposes the installation of a concrete platform below the ocean surface.“Offshore development needs high end technology and LMG Marin can meet that qualification. A development at Saphan Hin will help boost tourism,” said Natthasak Songserm, an LMG Marin representative.Although Phuket Governor Tri Augkaradacha accepts more action must be taken to attract tourists to Phuket, he refused to allow the feasibility study the go ahead at this time, commenting that he would first need to gauge the opinions of Phuket officials and the local residents of Saphan Hin.Rebecca Smith Phuket Ocean Villas - http://www.phuketoceanvillas.comMore Phuket news..... http://blog.phuketoceanvillas.comPhuket Ocean Villas specialise in luxury ocean view property in Phuket, Thailand. We have a superb and extensive portfolio of luxury property in Phuket, available in breathtaking locations throughout the island, including new property, resale property and land.Phuket Ocean Villas - http://www.phuketoceanvillas.comMore Phuket news..... http://blog.phuketoceanvillas.com149/12 Srisoonthorn Road, Cherngtalay, Thalang, 83110, Phuket, Thailand.

01-24-2011 | Politics, Law & Society
Phuket Ocean Villas Co. Ltd.
Phuket stages Thailand Five Southern Border Provinces Product Fair
Phuket, Thailand: Phuket Town has been chosen as this year's host for the annual Thailand Five Southern Border Provinces Product Fair which runs from January 31st to February 6th. Last year, the fair took place at the Marketing Organisation for Farmers in the Chatuchak district of Bangkok. This year however, centre stage for the event will be Saphan Hin; Phuket Town’s largest municipal park. The Thai Government first introduced the Fair to help
Comments about openPR
OpenPR ist the nicest and most clearly laid out PR platform I have seen to this day. The press releases are displayed very nicely and clearly and without any unnecessary frills. The updates are fast and the finished release looks appealing and is clearly legible. Even with 16 years of experience one discovers new things from time to time. Congratulations!
Gabriele Ketterl, Director Marketing & PR, Menads