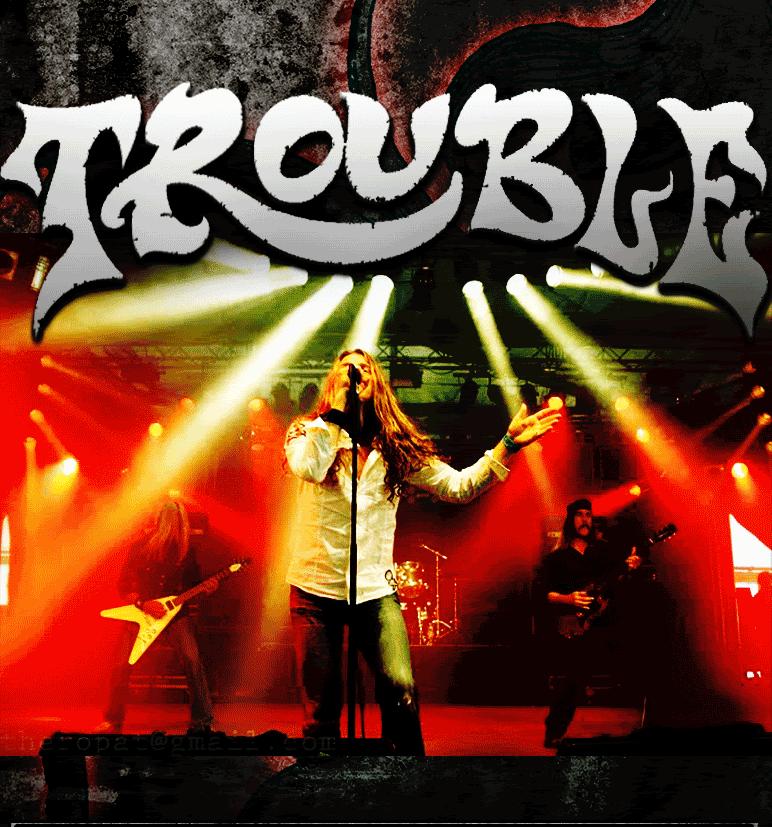 Chicago-based Doom Metal Legends Trouble are in the studio working on their latest studio album, which makes for their ninth (9th). The “as-yet-unnamed” release will consist of a minimum of 10 songs that not only feature their legendary heavy guitar riffs that have gained them a legion of loyal fans but a new creative edge. “The band is really excited about this record. We wanted to make the consummate Trouble studio album that also incorporates all of the innovative elements that having new talent offers us,” states Rick Wartell, co-founder/guitarist. One of those new key elements is the addition of the new singer Kory Clarke (of Warrior Soul) as this will be his first studio album with Trouble. Wartell continues, “Kory is an incredibly talented and dynamic singer. He’s a great addition to the band as he brings a high level of professionalism, which has positively affected the creative process. Working in a no-limitation environment is great.”The band is also utilizing the limitless technical advantages that exist today, conducting most of their songwriting collaboration virtually as Clarke currently resides in Berlin. “Bruce (Bruce Franklin) and I record our guitars separately and then would send those tracks to Kory who would in return, send us his vocals. As we share a collective vision for the album, this hasn’t hampered our progress in any way”, says Wartell. Also adding their talents to the band’s vision for the album are bassist Shane Pasqualla and drummer Mark Lira, for whom both, this is their first studio album with Trouble.Recording is being done at WARBURN STUDIOS, their own studio and according to Wartell, “One of the luxuries of recording in your studio is that you’re not under any time constraints. We can work on our own schedule which allows us to focus on the creative process.” Working with Trouble is their long-time Engineer Larry Burns who is entrusted with their signature sound not only behind the studio console helm, but at their live shows worldwide as well. Bill Metoyer, whose resume reads like a Who’s Who in Metal Music and has worked with Trouble in the past, is handling production. According to Trouble, the expected record release date is Summer 2011.Trouble is an American doom metal band noted as one of the pioneers of their genre as they created a distinct style and sound. A critically acclaimed group, their first two albums, Psalm 9 and The Skull are cited as landmarks of doom metal. The band has extensively toured both the U.S. and Europe and has retained a loyal fan base.The current line-up of the band is: Kory Clarke (vocals), Rick Warell (guitars), Bruce Franklin (guitars), Shane Pasqualla (bass) and Mark Lira (drums).Website: http://www.newtrouble.com/ Myspace: http://www.myspace.com/troublechicagospace : loft : six 1903 W. Belle Plaine Ave. Chicago, IL 60613 Kat Podmolik kat@spaceloftsix.com

02-02-2012 | Business, Economy, Finances, B …
space loft six
Power Plumbing Celebrates Winning Five Angie’s List Super Service Awards
Power Plumbing celebrates winning five coveted Angie’s List Super Service Awards with a visit from Alderman Ameya Pawar of the 47th Ward in Chicago. Power Plumbing & Sewer Contractors, Inc. has been awarded five of the prestigious 2011 Angie’s List Super Service Awards, an honor only bestowed annually on approximately 5 percent of all the businesses rated on the nation’s leading provider of consumer reviews on local service companies. The awards
10-04-2010 | Arts & Culture
space loft six
studio9 to host photographers Jeromy Robert and Ben Hoffman during Fall Brewery …
Two photographers will be highlighted during a show hosted by studio9 during the Brewery Artwalk to be held on October 9th and 10th. Curating the show is resident photographer Jeromy Robert, a fine art and commercial photographer, whose client list ranges from celebrities Jackie Collins and Alan Cumming to corporate clients such as Small Luxury Hotels of the World and HGTV. Mr. Robert will be exhibiting 10 pieces

02-11-2021 | Advertising, Media Consulting, …
BookBuzz.net
ARE BETA READERS WORTH THE TROUBLE? (Author Advice)
I’ve spoken with a number of authors who have raised a similar question about beta-readers. To clarify, when we say beta readers, we’re referring to readers who read an early manuscript, either in part or whole, and provide some kind of feedback. Some writers have found these early readers to be unreliable, unhelpful or sometimes even distracting to their writing process. But for me, beta readers have been an integral
10-28-2020 | Industry, Real Estate & Constr …
Hauschild Engineering
Hauschild SpeedMixer®: Bubble-free means trouble-free
Whenever adhesives and sealants are to be mixed in R&D processes, scientists and development chemists worldwide rely on one device: Thanks to an ingenious mixing technology, the “Hauschild SpeedMixer®” is capable of producing homogeneous, multi-material compounds such as liquids, high-viscosity pastes and powders in a matter of minutes and bubble-free. When mixing substances for adhesives and sealants in labs is on the agenda, the “Hauschild SpeedMixer®”, developed in Germany almost
08-14-2018 | IT, New Media & Software
Report Consultant
Global Trouble Tracking Software Market Report 2018
The global trouble tracking software market covers all the critical components of the market and shows quantitative and subjective data about its components on a worldwide and also local level. This is an innovation that encourages including abilities of correspondence and information transmission to regular gadgets with the assistance of implanted sensors and figuring power, is viewed as the following enormous thing for the present quickly digitizing world. This pattern
04-27-2018 | Business, Economy, Finances, B …
Merchant Stronghold
Zelle: The Money Transfer App in Trouble
It’s a fact that, peer-to-peer money transfer is never a bad idea. Venmo’s clear demonstration stated the same and made banks rush to fill the gap. Then, P2P mobile payment market was hit by Zelle, a bank-backed alternative. Increased in popularity in no time, Zelle was expected to take on Venmo. Now, Zelle is in big trouble. The New York Times report revealed the security lapse in the app, bringing
01-19-2018 | Media & Telecommunications
Transparency Market Research
Smart Antenna Brings You Trouble-Free Communication
A smart antenna is a multi-element antenna in which the signals that are received at each antenna element are combined and managed intelligently in order to improve the performance of the wireless system. These antennas are capable of increasing the signal range, suppressing interfering signals, combating signal fading and as a consequence increasing the capacity of a wireless system. The global smart antenna market is primarily driven by factors such
02-26-2016 | Arts & Culture
space : loft : six
Trouble Announce Spring 2016 European Tour
Doom Metal Legends Trouble will launch their Spring 2016 European Tour on April 28th Trouble have been music mainstays for over 30 years, as their first two albums Psalm 9 and The Skull are cited as landmarks of doom metal. Long considered pioneers of the genre, the band created a distinct style and signature sound by drawing upon the influences of the British heavy metal bands Black Sabbath and Judas Priest,
Comments about openPR
9 o'clock: discuss press release with client, 10 o'clock: submit release to openPR, within the briefest possible time release is published and displayed in a prominent place on openPR.de. I am thrilled!
Zehra Spindler, Calypso Now! - Communication Agency