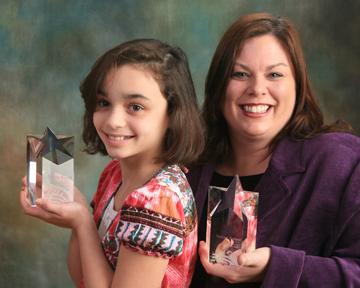 Amy Taylor, a voice over professional based in the United States, is the current winner of the Voicey Award for Best Female Voice. To add to the excitement, Taylor’s daughter, Grace, also won an award in the category of Best Child Voice. Mother and daughter were elated to be able to share in this momentous occasion.“It was thrilling to be acknowledged by my peers by receiving the Voicey. I’m speechless” says Taylor. “I was especially happy for Grace. She works so hard at her craft.” The Taylor’s are close enough to New York City that they can travel there if asked to by clients. But thanks to technologies like ISDN and Source Connect, they can live in a small town, audition and even record the gig from their home studio.The pair received matching Voicey Awards made of optical crystal, which are prominently displayed in their home recording studio. You may have heard Amy’s announcements while shopping at BJ’s or Kmart. Or perhaps Amy’s voice helps you navigate to your destination on your GPS. On TV, radio, on the web, on your phone or in your favorite store, Amy’s voice can be heard in English and Spanish.About Amy TaylorBased in Harwinton, CT, award-winning bilingual voice over talent Amy Taylor speaks American English and Neutral Latin American Spanish. Some recent clients include Subway, South Beach Diet, Billboard Latin Music Awards, Western Union, Verizon Wireless, and Tilex.About Voices.comBased in London, Ontario, Canada; Voices.com provides a virtual exchange, facilitating business transactions between creative producers and voice-over professionals. Companies that have used Voices.com include NBC, ESPN, PBS, The History Channel, Reader's Digest, Comcast, Microsoft, Cisco Systems, ING, Western Union, Nortel, Ford, GM, the US Army, the US Government and more.Voices.com Head Office Lin Parkin 999 Collip Circle London ON N6G 0J3 Toll Free: 1-888-359-3472 Phone: 519-858-5071 Fax: 519-858-5197 Hours: Mon-Fri 9AM - 4PM E.S.T.