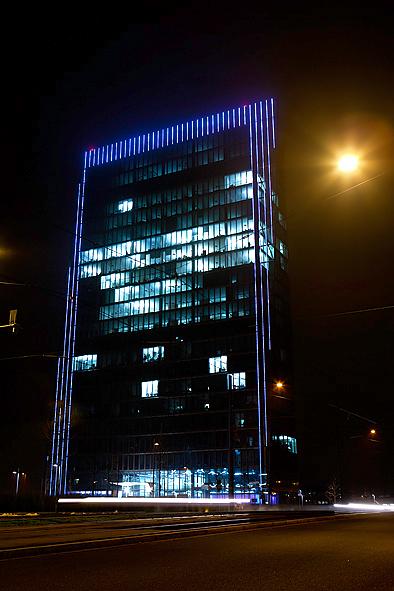 “Panta rhei – Everything flows“ is the motto of a new star on the banks of the Weser river in Bremen: the 82-metre-high Weser Tower. On the 7th December 2010, star architect Helmut Jahn of Chicago and lighting artist Yann Kersalé of Paris pushed the switch that turned on the illuminations on the façade of the highest office block in Bremen. From their vantage point in the Weserburg museum, the pair had a magnificent view – when the fog finally lifted – of the illuminations marking the official opening of the Weser Tower in the heart of the Weser quarter of Bremen’s Überseestadt district.The 700 metres of LED strips were installed on the glass exterior facade of the office block during the summer. The modern, ecologically sound building complex is Bremen’s latest landmark and symbolizes the transparency and openness to the world of the Hanseatic city. The dynamic architecture of the 22-storey building is crowned by a work by the French lighting artist Yann Kersalé entitled “La Rivière Source”. Since the dedication, the ripples of the Weser below have been echoed by the façade of the tower – an effect achieved through the use of light-emitting diodes (LEDs). The movement of the waves is captured by a camera and the digital data transferred by Internet to the computer controlling the LED strips that frame the glass façade of the tower. These mirror the movement of the waves, producing a blue, glimmering light-show that is triggered by the onset of darkness. It is a highly unusual illumination, unlike any currently to be seen in Bremen, and it draws the eye of the onlooker towards the Weser embankment.This project demonstrates the expertise of the service provider A&O Technology in the field of architectural lighting with LED technology. The culmination of a long process of selection, A&O Technology was awarded the contract for the realisation of the fixed installation on the outer façade of the Weser Tower back in 2009. Because of their quality, A&O opted for special, video-capable LED strips designed and manufactured in Germany. With a light intensity of 45000 mcd, the strips, which were specially designed for outdoor applications, combine a particularly high level of brightness with the low energy consumption typical of LED technology. This product, which was selected by A&O, soon manifested its superiority over the products of other well-known manufacturers, convincing in the process not only the customer but also the French artist Yann Kersalé, who created the lighitng design at the behest of the tower’s owners.A&O Lighting Technology GmbH, which was founded by Marco Niedermeier, has been actively engaged in the hiring and sale of show and architectural lighting equipment since 1995. A&O's diverse inventory includes special LED equipment and several hundred searchlights (high-power xenon floodlights) that can be used for well-known entertainment- and architectural lighting applications. It also has the exclusive worldwide distribution rights to a variety of architectural luminaries and searchlights, such as the FALCON® range from alpha one. A&O Lighting Technology, with its head office in Germany, is active worldwide with subsidiaries and offices in UAE, USA and UK. For more information, visit: www.ao-technology.comDecember 2010 / A&O Lighting Technology GmbH, Industriestraße 31-33, 28876 Oyten, Germany, Telephone: 0 42 07 / 66 84-0, Internet www.ao-technology.com, Contact: Tanja Niedermeier

08-27-2020 | Advertising, Media Consulting, …
GLOBAL INFO RESEARCH
Global Professional Survey Report Analysis for Regenerated Lead Industry (2020-2 …
This report also researches and evaluates the impact of Covid-19 outbreak on the Regenerated Lead industry, involving potential opportunity and challenges, drivers and risks. We present the impact assessment of Covid-19 effects on Regenerated Lead and market growth forecast based on different scenario (optimistic, pessimistic, very optimistic, most likely etc.).   Market Overview The Regenerated Lead market report provides a detailed analysis of global market size, regional and country-level market size, segmentation market growth, market share,
01-10-2018 | Energy & Environment
WISEGUY RESEARCH CONSULTANTS PVT LTD
Biopower in Germany Market 2017: Key Players: Abfallwirtschaftsgesellschaft mbH, …
WiseGuyReports published new report, titled “Biopower in Germany, Market” Summary "Biopower in Germany, Market Outlook to 2030, Update 2017 - Capacity, Generation, Levelized Cost of Energy (LCOE), Investment Trends, Regulations and Company Profiles", is the latest report from the industry analysis specialists that offer comprehensive information and understanding of the Biopower market in Germany. The report provides an in-depth analysis on global renewable power market and global Biopower market with forecasts up to
01-28-2016 | Leisure, Entertainment, Miscel …
A&O Lighting Technology GmbH
A&O Creative broadens the concept of Sail Bremerhaven 2015 with spectacular ligh …
For Sail Bremerhaven 2015, A&O Creative created light shows in the harbour. The lighting, laser and pyro displays enthused the international spectators. Every five years, Bremerhaven is given over to sailors. This year, over 250 ships from 20 nations dropped anchor in the harbour to participate in the Sail Bremerhaven festival, one of the largest gatherings of windjammers and traditional sailing ships in the world. The wide variety of vessels,
09-24-2013 | Media & Telecommunications
Orga Systems GmbH
Orga Systems takes part in prestigious research program on e-Mobility
Paderborn consortium from science and industry explores electric vehicles’ future opportunities Paderborn (Germany), 24 September 2013 - Orga Systems, a leading software vendor for real-time charging and billing solutions, with an international customer base in the telecommunications, utilities and automotive markets, is a research partner of the project SMART EM. In cooperation with strong players such as energy supplier Westfalen Weser Netz (former E.ON Westfalen Weser) and University of Paderborn’s Software
04-27-2010 | Sports
BTD Group
E-Business: Werder and BTD collaborate
Munich, 21. April 2010. Werder Bremen will alter their E-business into a new direction with their new partnership with the BTD Group. As a part of the stadium renovations, the “green & white“ will alter and upgrade their technical infrastructure in the upcoming months. For the Weser Stadium, new state-of-the-art electronic systems will be designed and implemented and the online presence of the club will be enhanced with features such as
02-14-2007 | Media & Telecommunications
Voyages Television
Watch Voyages on MonA TV - Holiday channel now also available on digital platfor …
Hanover (Germany), 13 February 2007 - German holiday channel Voyages is linking up with the digital platform MonA TV to reach 1.5 million extra DVB-T households in the Brunswick, Bremen and Lower Weser, Hanover, Kiel, Lübeck and Nuremberg conurbations. Voyages already represents the future of the “Entertainment Economy”, offering a blend of destinations documentary and holiday booking TV, with films of the world’s most beautiful destinations in HDTV quality. Every Sunday from
Comments about openPR
OpenPR ist the nicest and most clearly laid out PR platform I have seen to this day. The press releases are displayed very nicely and clearly and without any unnecessary frills. The updates are fast and the finished release looks appealing and is clearly legible. Even with 16 years of experience one discovers new things from time to time. Congratulations!
Gabriele Ketterl, Director Marketing & PR, Menads