A tale of four christmas trees... 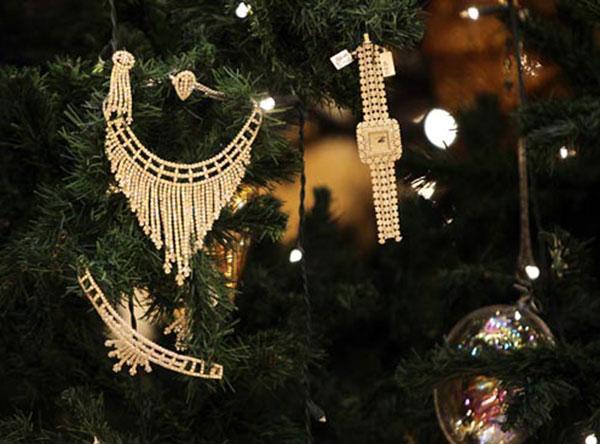 The most expensive Christmas Tree in the world

It seems the humble Christmas tree is now a symbol of prosperity and this year the race is on for the title of "The most expensive tree in the world."The town of Milan, Italy was the first to claim the prize with the unveiling of a 450,000 USD tree in the Piazzo Duomo.The spectacular tree was donated by Tiffany & Co. and has over one hundred thousand white lights and decorations all specially created by the renowned American jeweller.The Italian church questioned Tiffany’s generosity when the well-known store opened a shop beneath the tree to sell its jewellery over the festive season - but in true Christmas spirit, and to keep the church happy, Tiffany will donate 9% of all sales to a local charity.http://www.oceanvillasgroup.com/tiffany-albero.aspThe Milan tree held the title of "The most expensive tree in the world" for only a few days until it lost out to another jewellery store - this time in Japan...When this stunning 24-carat gold tree went on display at the Ginza Tanaka store in Shinsaibashi, Osaka.http://www.oceanvillasgroup.com/gold-christmas-tree.aspThe tree weighs 21 kilograms and is decorated with over 240 jewels, including diamond baubles and strings of pearls. It has a price tag of 150,000,000 Yen (around 1,800,000 USD)The store official felt the cost was justified despite the current economic situation, saying, "Economic sentiment is sluggish. But, at least in this store, we want people to feel a gorgeous atmosphere."Yet, within just a few days, the 24-carat tree was surpassed by an even flashier number...This year the titleholders of the "The most expensive tree in the world", are the Emirates Palace Hotel in Abu Dhabi.The thirteen-metre high tree, which sits in the hotel’s lobby, has been valued at over 11,000,000 USD - making the Tiffany and Ginza Tanaka trees look like poor relations.In fact, the tree’s branches are adorned with watches, necklaces and bracelets, which between them contain 181 diamonds, sapphires, pearls and emeralds.http://www.oceanvillasgroup.com/most-expensive-tree.aspThe Emirates Palace has asked the Guinness Book of Records to certify the tree as the worlds’ most expensive and a twenty-four hour surveillance team is in place to protect the precious decorations.The Abu Dhabi tree is officially "The most expensive tree in the world".But sadly, there is also a prize for the worst tree, or the "Charlie Brown Christmas Tree", as it is has become known in America.This year that prize went to the Castle Dene Shopping Centre, Peterlee in the UK.This tree will not require a twenty-four hour security team, as it has just twelve coloured lights and no decorations.Yet, the town’s shopping centre hired one of the nation’s pop sensations, Atomic Kitten star Natasha Hamilton, to switch on the lights in a lavish ceremony.Since the tree went up the council have been inundated with complaints - locals had expected to see some Christmas cheer, rather than this forlorn spectacle.http://www.oceanvillasgroup.com/Charlie-Brown-Christmas-Tree.aspEmbarrassed, local councillor Joan Maslin, said "I would describe this tree as just like a twig. To be honest, it looks like something that people would throw in a skip after Christmas."I actually think it has a “certain charm” and at least it’s real, not some over the top artificial show piece, which has unfortunately now become the symbol of Christmas.I’d like to wish you and your family a very merry Christmas and a happy and prosperous New Year.Rebecca Smithhttp://www.oceanvillasgroup.com http://blog.oceanvillasgoup.comOcean Villas Group are specialists in lifestyle and investment property worldwide and are committed to supporting investors in both the emerging and established property markets across the globe. We have an extensive range of property throughout the world which enables us to satisfy the goals of the most demanding investment portfolios.Level 31, 6 Battery Road, Raffles Place, 049909, Singapore.

You can edit or delete your press release A tale of four christmas trees... here

12-14-2017 | IT, New Media & Software
GamerKeyz
GamerKeyz Christmas
GamerKeyz just opened we buy game key codes in bulk so you pay less for the games you love. For Xmas we are offering buy one game get one free until Xmas day! For every game you buy you will receive a random Steam game key which will be delivered to your inbox on Xmas morning. We have 680 Steam games for sale now, we are about to add Origin
12-28-2010 | Fashion, Lifestyle, Trends
Phuket Ocean Villas Co. Ltd.
Christmas in Phuket
Phuket, Thailand: Thailand is a 95% Buddhist country so Christmas is not a festival that officially appears in the Thai calendar, but with a large ex-pat community and Thais who love an excuse to have fun, Christmas is celebrated in fine spirit every year - especially in Phuket. In fact, they started playing Christmas carols in Phuket’s Tesco on 19th November which took me by surprise. Then I noticed the frozen
12-23-2010 | Health & Medicine
IndianDiabetics
Christmas Celebration with Indiandiabetics
Enjoy Christmas, it is a time for celebration and eating for everyone…a little of what you fancy over Christmas will definitely do you good…an odd high glucose reading shouldn't affect your long term control or health or health. 1. Stick with sugar free or diet drinks, or fresh fruit juice only with meals. Fresh fruit juice has lots of natural sugar which will send blood sugars high if taken. 2. Save your selection boxes
12-22-2010 | Politics, Law & Society
Michael Prell
Merry Christmas
’Tis The Season To Celebrate The Annual Festive Tradition Of Refusing To Call Christmas “Christmas.” 68% of Americans say they prefer to be greeted with “Merry Christmas” and not “Happy Holidays” and yet each year the Anti-Christmas Brigade takes to the streets, and takes to the airwaves, to protest against Americans calling Christmas by its name. Why is that? Sometimes the best way to understand why people do what they do is to
11-24-2009 | Energy & Environment
TiSUN Gmbh
Last Christmas
The Tyrolean solar specialist keeps it Christmas promise. TiSUN has donated a solar system to the children at the Mordecai orphanage in Port Elizabeth (South Africa) and had it fully installed, free of charge. A project to improve health conditions for orphans who have lost their parents to AIDS has now been carried out. The system became operational in early September and provides hot water for two showers and a bathtub.
11-08-2005 | Fashion, Lifestyle, Trends
Prang Consulting-Team
Christmas in blue
It does not have to be red and green - you also can use other colours to put nice accents on Christmas time. Why not take blue, white or silver? This set of colourss not only takes a noble effect but also fits perfectly into cold winternights. It symbolizes both, ice and snow as well a most solemn Christmas mood. This years Christmas trend colours are presented at http://www.1packen.de by the
Comments about openPR
I can't but agree to the positive statements about your portal: easy to use, clear layout, very good search function, and quick editing!
Jens O'Brien, Borgmeier Media Communication