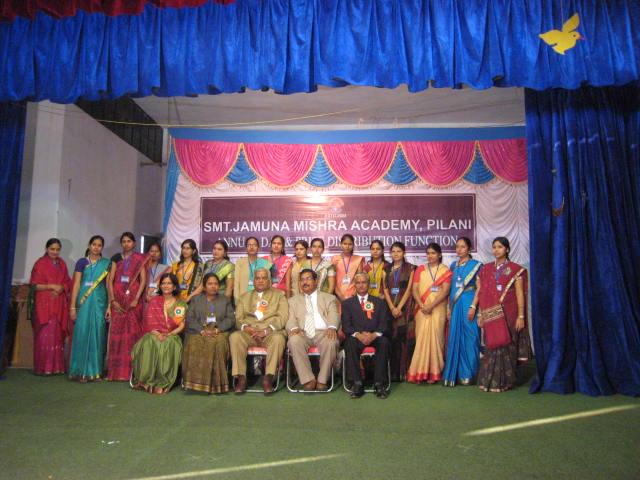 Behind every successful institution, there has always been a dreamer. The dreamer for JMA is Dr Brij Mohan Mishra, NRI (Syracuse, New York) Physician and entrepreneur who wanted to set up an English Medium school at Pilani in memory of his beloved mother Smt Jamuna Devi. Dr Mishra and his family members Dr Suman (wife), Dr Gautam (son) and Mridula (daughter in law) have taken up the JMA project with passion and have nurtured it at every stage.

The Goenka Pariwar of Laxmi Organic Industries who are well known for their charitable work in and around Pilani as well as for the SourcePilani Rural BPO initiative which has been making waves allover for the rural transformation also have been extending their whole hearted support and guidance for shaping up the JMA.

JMA which started in 2004 with an enrollment of 60 students for the Nursery, LKG, First Junior and Class1 has grown today till Class VII with well over 6 times the enrollment. While the school admits both boys and girls, the girl student enrollment has been steadily rising every year and is presently nearing 50% of total strength which itself is a matter of pride in a state which had alarmingly low record of girl’s education. The teacher strength at JMA also has grown from 5 in 2004 to 18 presently.

After arrival of chief guest and tilak ceremony, the lighting of the ceremonial lamp took place. Smt Booma Natarajan Principal of the school in her opening speech statistically highlighted the literacy picture of Jhunjhunu district and introduced the Chief Guest to the audience and reiterated that she and her teacher team firmly believed that success is a journey and not a destination.

The cultural program by students opened with Saraswati Vandana which was followed by an action dance Woogie – Boogie. After taking the audience on rail with the Dhadak Dhadak song, the children mesmerized the audience by dancing to the song Aisa Desh Hai Mera. The other items included a kathak dance, English skit based on episode from Mahabharata, a group song, poetry recitation and Rajasthani folk dance. The Hindi play based on sportswomen from rural Rajasthan and Haryana winning medals in Common Wealth Games and Asian Games drove a strong message about girl child to the audience.

Dr Mishra in his speech thanked Smt Booma Natarajan JMA Principal as well as the team of teachers for their dedicated efforts to make the school top ranking in Pilani and reiterated his commitment for promoting quality education with modern infrastructure at Pilani. Chief Guest Dr Jitendra Singh appreciated Dr Mishra’s love for his native place Pilani despite his living in America.

The minister also had a word of appreciation for Mr Vijay Pal Yadav for putting up the Shridhar University with state of the art infrastructure at rapid pace in a rural place like Pilani. When he pointed out that the Present Chief Minister of Maharashtra Mr Prithviraj Chavan had an important part of his education at Pilani there was a thunderous applause. He also awarded the prizes for various competitions and overall excellence. YES Bank Pilani had also sponsored two special prizes in terms of support for purchase of entire course books for the coming academic session.

Addressing the Chief Guest as a doctor MLA with a golden heart for the copper rich Khetri constituency, Mr Vijay Pal Yadav in his speech quoted Gurudev Rabindranath Tagore as well as Shri Aurobindo on education and urged the students to make best use of opportunities and facilities of the school to become good and worthy citizens for India and world at large.

Ms Poonam Saini anchored the proceedings and delivered the vote of thanks. Master Vishal and Miss Himakshi both from Class VII did the master of ceremony job with aplomb. The other dignitaries who attended the annaul day included Prof BR Natarajan, Pro Vice Chancellor Shridhar University and heads of several other institutions in and around pilani.

The function ended with the singing of national anthem and the parents and children who had come for the function left with beaming faces and pride that they were part of an institution which is a jewel in the crown among the schools at Pilani.

12-18-2020 | Logistics & Transport
Möbius Aero
Our Chief Pilot | Philip Goforth
See here: https://rumble.com/vbv521-special-announcement-our-chief-pilot-philip-goforth.html We are excited to announce that Premier F1 Pilot, Philip Goforth, has Joined Team Möbius as our Chief Pilot! With more than 15,000 hours of flight under his belt, Phillip is a highly versatile pilot. He has done all types of flying, from Alaskan bush to commercial airline to corporate aviation. He is qualified in a variety of aircraft types and has logged time flying gyrocopters, doing aerobatic performances
09-01-2016 | Tourism, Cars, Traffic
Lookupfare
The Chief Purpose of LookUpFare Travel App
New York, United States, 30-Aug-2016; LookUpFare, a tour company, caters to all the components of a trip. From finding the best flight seats to booking hotels to designing an itinerary. This tour company takes care of everything to make your trip as hassle free as possible. Along with these services, they also make sure that you find the best possible deals available online. Now you may ask why not look up
01-18-2012 | Science & Education
Communications Strategy Group
EducationDynamics Names Bruce Douglas Chief Marketing Officer
Veteran Marketing Executive Joins Top Higher Education Marketing Information and Technology Services Company Hoboken, New Jersey, January 17, 2012 - EducationDynamics, higher education’s leading marketing information and technology services company, announced today the appointment of Bruce Douglas as Chief Marketing Officer. Mr. Douglas is a seasoned marketing professional with more than 20 years of extensive marketing and management experience. As Chief Marketing Officer, Douglas will cultivate EducationDynamics’ marketing strategy and head
02-11-2009 | Business, Economy, Finances, B …
National Life Group
National Life Group Appoints Chief Marketing Officer
Montpelier, Vermont (February 11, 2009) – Mehran Assadi, president and chief executive officer of National Life Group, has announced the appointment of Vincent G. Vitiello as chief marketing officer for National Life. “I am very excited to have Vince join our team,” said Assadi. “He is a seasoned executive who is highly regarded throughout the industry. He brings to us nearly 30 years of distribution and marketing experience in two
06-28-2007 | Industry, Real Estate & Constr …
SKIDATA AG
SKIDATA announces Chief Financial Officer
Salzburg, June 27 2007 – As of July 1 2007, Dr. Michael Hofer (38) will join the Executive Board of SKIDATA AG as Chief Financial Officer. Michael Hofer began his career at SKIDATA as head of Controlling and was then appointed head of the Finance department, which included responsibility for Accounting, Controlling, Treasury, Human Resources and Legal. “Mr Hofer has extensive experience in international business, which makes him perfectly qualified
12-15-2006 | Business, Economy, Finances, B …
Security Oracle - NSI HQ Ltd
Counter Terror Chief Outlines Policy
The most senior civil servant in the fight against terrorism has outlined the Government’s approach to developing a counter terror policy which can be both effective and proportionate. Sir Richard Mottram is the Cabinet Office Permanent Secretary on Intelligence, Security and Resilience, and explained the Government’s thinking to an audience of security and counter-terror experts at the Counter Terror World Conference in London. He outlined the Government’s existing counter terror policy,
Comments about openPR
9 o'clock: discuss press release with client, 10 o'clock: submit release to openPR, within the briefest possible time release is published and displayed in a prominent place on openPR.de. I am thrilled!
Zehra Spindler, Calypso Now! - Communication Agency