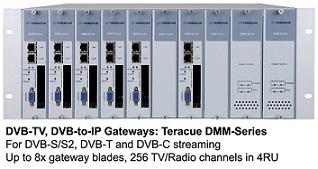 Supply and distribution of DVB TV and own individual channels and remote controlling from the Amino Set Top BoxesThe ESPRIT arena in Düsseldorf, one of Europe's most modern multifunctional arenas for sports and entertainment events and with a spectator capacity of up to 66,000, uses IPTV products from Teracue AG.More than 80 TV screens are positioned in the most diverse of areas throughout the entire arena. The TV screens are to be found in the entrance area, at the VIP Check-in, in the Business-Club, in the corporate boxes, within the Havanna Bar and in the press conference room.The TV screens are connected to the IP Network by means of standard Amino Set Top Boxes and receive all TV and input signals via this connection. The Set Top Boxes are connected to the TV screens by means of HDMI or multi cable (FBAS, components or YUV).In order to supply the satellite signals, Teracue employed six DVB-TV, DVB-to-IP Gateways of the DMM-140 Series. Currently, a total of 21 television channels are being fed into the network as IP Streams. In the process, an unlimited number of Set Top Boxes can be fed by one single TV-Network Stream.Three Teracue ENC Series Encoders are used for the production of media for the stadium itself. The Encoders generate in-house video streams and these video streams are used to feed specific signals, such as 'Fan-TV' or advertising channels, to the TV screens located throughout the stadium. These video streams can be made available on the TV screens in order to display information, corporate videos and for advertising and promotion purposes before and after events such as concerts or during the half-time break at football matches.The switching of the Set Top Boxes, in other words the selection of the input signals, is carried out by the Teracue ElementManager. The software applications can remotely control the Set Top Boxes either individually or in groups via the network. The Set Top Boxes can be switched to specific channels, meaning specific video streams, before, during and after events. This allows for the quick, easy and uniform configuration of all televisions at specific times during events. 'Fan-TV' can be shown during the halftime break at football matches for example. Although many artists often prefer that the screens display only blank screens during their concerts, before and after the concerts on the other hand, advertising films can be shown and the televisions can be used for marketing purposes.The television displays in the corporate boxes can be controlled independently and the channels can be selected for the individual corporate box. The ElementManager can be used here to bring all the displays into a predefined starting position at the beginning of an event.During the initial installation five years ago, the ESPRIT arena had already placed great importance on a flexible video distribution with its choosing of Teracue Streaming Products and the distribution via standard IP Networking Technologies. Since the 'HD-Upgrade' in October 2010 HD-Ready DVB-TV Gateways from Teracue und Set Top Boxes are now also in use.About the ESPRIT arena In 2005, the 66,000 seat multifunctional arena was completed, becoming the new neighbor of the Internationale Messe Düsseldorf. The arena is easily accessible with public transport, by car or by air. We have our own subway station, 18,000 parking spaces and are located in close proximity to Düsseldorf International Airport. All these combine to make arrival and departure a thing of ease. They are but just some of the reasons why the arena in Düsseldorf is included among the most modern and impressive multifuntional arenas in Europe: www.espritarena.de.About DüsseldorfCongress DüsseldorfCongress is a company of the city of Düsseldorf and its Messe and offers you nine different event buildings, with over 100 rooms and a total capacity able to cater for 125,000 people. Besides the CCD Congress Center Düsseldorf, hall 6 / hall 8a / hall 8b, Museum Kunst Palast and the Station Airport, the DüsseldorfCongress also markets the PHILIPSHALLE, the ESPRIT arena and the ISS DOME. Our event and conference locations are equipped with the very latest technologies and leave no wishes go unfulfilled. Whether it be concerts, corporate events, general meetings or international sports events - with DüsseldorfCongress, one of Europe's largest event location providers, you have found the right partner: www.duesseldorfcongress.deAbout Teracue Teracue was established in 1991 and currently employs 15 personnel. Development and the marketing of professional Broadcast and IPTV systems through an international network of specialised dealers represent the main business activities of the firm today. Clients include public and private broadcasting companies, corporations, banks, universities, clinics, medical and training facilities, fire services and police centres, aerospace companies, military and other federal organisations. Further information is available at www.teracue.com.Press contact: Rainer Link, Marketing Manager Teracue AG Schlossstr. 18 85235 Odelzhausen Tel: +49 (0)8134 555 150 rainer.link@teracue.com www.teracue.com

08-07-2018 | Industry, Real Estate & Constr …
Thermoseal Group
Join the Industries’ In-Crowd at the ThermoBAR in Düsseldorf!
Thermoseal Group is set to host its popular ThermoBAR to coincide with the Glasstec 2018 Exhibition in Düsseldorf. Entertainment, food and drinks will be flowing on Wednesday 24th October at the after-show party at the ThermoBAR, aka McLaughlin’s Irish Pub in the Altstadt – the same location as last time. Entry is limited to those issued with entrance bands. E-mail marketing@thermosealgroup.com to reserve yours now! Thermoseal Group is also
10-19-2016 | Energy & Environment
Thermoseal Group
Glasstec Düsseldorf Success for Thermoseal Group
Thermoseal Group reports a successful attendance at the Glasstec Exhibition in Düsseldorf 20-23 September 2016, both through enquiries at the Group’s 50 sq. ft. booth and also at their highly successful after-show party hosted at the ThermoBAR in Düsseldorf’s Altstadt. The team at Thermoseal Group are now responding to the multitude of leads from distributors and sealed unit manufacturers in 39 countries for their UK-manufactured Thermobar and Thermoflex industry-leading warm edge
03-31-2016 | Arts & Culture
Pretty Portal
Lovely people in Düsseldorf
Starting on 8th of April, Pretty Portal presents a collective show with works that focus on human behaviour. On display are paintings and drawings by Natalia Rak, Pixelpancho and Sokar Uno. In the show, the artists look behind the facade of human being and present us "Lovely people". Pixelpancho topic is the incarnation of machines, or vice versa, the transformation from human to robot-like creatures. Puppet like people baring their interior mechanics. Natalia
03-21-2016 | Industry, Real Estate & Constr …
CERATIZIT S.A.
Visit CERATIZIT at Wire 2016 in Düsseldorf
At stand C53 in hall 9 Hard Material Solutions by CERATIZIT and Toolmaker Solutions by CERATIZIT are presenting carbide solutions for your specific industrial application from April 4 – 8 this year. Wire ranks amongst the worldwide leading wire and cable trade fairs and will take place at the trade fair ground ‘Messe Düsseldorf’ over a period of five days. The top-class brands Hard Material Solutions by CERATIZIT (link to: http://www.ceratizit.com/products/wear-protection/hard-material-solutions-by-ceratizit/) and
07-29-2011 | Advertising, Media Consulting, …
Textklinik®
Textklinik® Düsseldorf devotes campaign to Japan
Textklinik® has a very special connection to Japan, thanks to the many years the company has been working with Japanese translators. The city of Düsseldorf, where Textklinik® is headquartered, is sometimes referred to as the Japanese capital on the Rhine. For these reasons, the company has kept a close eye on the situation in Japan during these last few months since the catastrophic tsunami. The Textklinik® team members’ hearts went
07-30-2010 | IT, New Media & Software
at-visions Informationstechnologie GmbH
OneVision TV for Hyatt Hotel Düsseldorf
The fifth Hyatt Hotel in Germany is another new highlight of Düsseldorf Media harbour. Contemporary and classic in design it is home to 303 rooms and suites. Located in one of two towers at the tip of a peninsula it provides a wonderful view of the harbor, old town and the Rhine. Design is of upmost importance to the hotel and General Manager, Monique Dekker, was keen to point out how
Comments about openPR
Your portal is fast, simple, and easy to use. Others may have more functions but they also demand more editing time, you have to preformat the text in order to achieve a good result etc. I think openPR is really fantastic!
Andreas Knepper, wallmedien AG