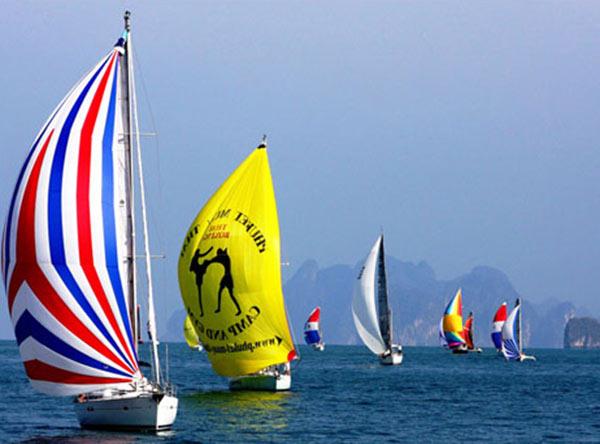 Phuket, Thailand: The 24th King's Cup Regatta gets underway in Phuket on Saturday 4th December 2010. Launched in 1987, the event is organised by the Phuket King's Cup Regatta Organizing Committee in conjunction with the Royal Varuna Yacht Club, the Yacht Racing Association of Thailand, the Royal Thai Navy and the Province of Phuket.Held every year during the first week of December, The King's Cup Regatta is Asia's largest yachting event and has developed a reputation as Asia's most prestigious and competitive regatta. Sailors from all over the world now descend on Phuket for five days of racing and six lavish parties each December. Entries have been flooding in from all corners of the globe with Asian competitors leading the way. In fact, the number of boats and crew from the Asian region, particularly China and Japan, is forecast to top previous records.Race Director, Simon James, commented; "We have large numbers of entrants from around Asia and in particular Hong Kong, Singapore, Japan, China, the Philippines and of course Thailand, and they make up a significant part of the fleet. Last year was the biggest ever Japanese fleet and as China is a growing market for sailing so the number of Chinese entries continues to increase also.""The Asian entries are very competitive, even in the cruising classes. A number of Japanese entries have won their class and the possibility of winning is the reason all participants come back year-after-year. Asian participants are no different to other participants in that they are here to sail well, achieve a good result, and enjoy themselves on and off the water.""The Phuket King's Cup Regatta has a certain prestige and participants are competitive. The competition is intense and this regatta is seen by many as the ‘one to win'. People come year-after-year to challenge in their class because there is no other multi-class regatta like it. Nothing offers such a diverse range of boats and sailing courses in such a great environment. Plus the social side is hard to beat," James concluded.If you enjoy sailing or just looking at the wonderful boats anchored in the harbour, The Phuket Kings Cup Regatta is an event not to be missed and is very highly regarded in Phuket's busy events diary. There are numerous events throughout the week for all the family to enjoy and it should be a week to remember.Source: http://blog.phuketoceanvillas.com/phuket-kings-cup-regatta-2010-thailand/Web site: http://blog.phuketoceanvillas.com Email: info@phuketoceanvillas.comPhuket Ocean Villas specialise in luxury ocean view property in Phuket, Thailand. We have a superb and extensive portfolio of luxury property in Phuket, available in breathtaking locations throughout the island, including new property, resale property and land.With over 20 years of experience in property sales and development and an after-sales service second to none, our focus is on providing choice without wasting your time.This, our integrity and our expertise at matching the right property to the right client make Phuket Ocean Villas the company of choice for the discerning purchaser of property in Phuket.Phuket Ocean Villas Co. Ltd., 149/12 Srisoonthorn Road, Cherngtalay, Thalang, 83110, Phuket, Thailand.

12-22-2011 | Tourism, Cars, Traffic
Castlewood Group Pte Ltd
Increasing Tourist Arrivals to Phuket
A surge in tourist arrivals at Phuket International Airport in 2011 has been welcomed by many of the Islands hotels. However long passenger queues caused by extra international arrivals have been cause for concern; what measures has the airport put in place to combat these problems? According to recent statistics from Phuket International Airport, the number of passengers at the airport had reached more than 5.6 million in the first eight
08-18-2011 | Tourism, Cars, Traffic
Castlewood Group Pte Ltd
Phuket; Tourism Hub
According to the Tourism Authority of Thailand (TAT), international tourist arrivals in Thailand have jumped by 24.36% to 8.2 million. They were mainly from the United States, Russia, India, China and Japan. The TAT also reports that revenue generated by tourism will reach 600 billion baht by the end of the year. They will soon be increasing their marketing efforts to target European first-time visitors, particularly from the United
07-18-2011 | Media & Telecommunications
Phuket Ocean Villas Co. Ltd.
HD TV comes to Phuket, Thailand
Phuket, Thailand: TrueVisions, the main satellite and cable TV operator in Thailand, has announced it will finally be rolling out its high definition (HD) TV service in Phuket. In 2007 TrueVisions first revealed it was testing HD TV. The initial test run included; Barclay's Premier League HD, Discovery HD, National Geographic Channel HD, History Channel HD, and some HD programs on True Series. However, since then progress has been slow. Finally, in
01-31-2011 | Tourism, Cars, Traffic
Phuket Ocean Villas Co. Ltd.
Phuket, Thailand arrivals hit all time high
Phuket, Thailand: According to a recent report by C9 Hotelworks, 2010 was a record breaking year for tourist arrivals on the island of Phuket, Thailand. The 2010 Phuket Hotel Market Report revealed that Phuket International Airport saw three and a half million arrivals last year; an increase of twenty-two percent over 2009. Arrivals from Russia and China showed the strongest growth due to the introduction of new direct flights to Phuket. To
12-30-2010 | Leisure, Entertainment, Miscel …
Phuket Ocean Villas Co. Ltd.
Asia Super Yacht Rendezvous Phuket 2010
Phuket, Thailand: A fleet of super yachts has arrived in Phuket for the annual Asia Super Yacht Rendezvous - an event which plays host to yachts from all over the world. The yachts initially congregate at the Royal Phuket Yacht Club in Nai Harn Beach on Phuket's south west coast and then travel north to Pansea Beach, near Surin. Leading the fleet is the worlds' fastest traditionally powered super yacht; the seventy
12-30-2010 | Leisure, Entertainment, Miscel …
Pacific-Club-Phuket.com
Pacific Club Phuket – Name Says Everything about Phuket Accommodation
Staying in a good hotel or in a resort embedded with luxuries and comforts is one of the most aspiring hope and whims of every travelers visiting a place of historical importance for enjoying a holiday or a vacation. Such a visit or break from their daily routine life can either be a short trip or even a vacation. But all such aspects and factors are primarily focused on recreational
Comments about openPR
OpenPR ist the nicest and most clearly laid out PR platform I have seen to this day. The press releases are displayed very nicely and clearly and without any unnecessary frills. The updates are fast and the finished release looks appealing and is clearly legible. Even with 16 years of experience one discovers new things from time to time. Congratulations!
Gabriele Ketterl, Director Marketing & PR, Menads