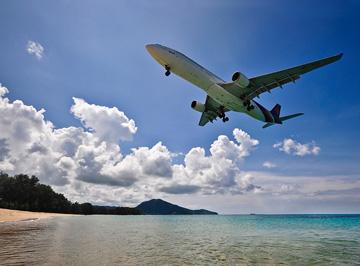 Phuket, Thailand: Following a series of delays over the last two years, construction of the new International terminal at Phuket International Airport is now scheduled to get underway at the beginning of November.The 5.9 billion baht (US$197 million) project was first presented to shareholders back in 2009 by Phuket International Airport’s acting director, Wing Commander Passakorn Surapipit.However, the departure of the Airports of Thailand PLC (AOT) president Serirat Prasutanand on the 9th March this year delayed the tendering process further whilst his successor, Manit Watanasen, was appointed.Once complete, terminal three will have a new runway, a refuelling zone, additional car parking, an AOT office and a cargo building.The project follows the success of the second terminal which was opened in 2009 and increased the airport’s passenger capacity to seven million at a cost of 516 million baht (US$17.2 million).The expansion plans also include the renovation of the existing domestic terminal which is expected to start in July 2012. The entire project is slated for completion in May 2014.The new terminal can’t come soon enough for Phuket, as last year the airport reached its maximum capacity of seven million passengers. And experts are predicting that passenger numbers will grow to more than eight million by the end of this year.Reasons for the growth are lower landing fees for budget airlines than at Bangkok’s Suvarnabhumi Airport and strong growth in the number of tourists visiting Phuket.In fact, Air Asia recently made Phuket International Airport its regional hub, with direct flights from Vietnam to Phuket, Indonesia to Phuket and Hong Kong to Phuket.Currently the airport caters for five hundred and thirty seven flights each week, operated by a total of forty four airlines. The majority of flights to Phuket are scheduled services.Once the new terminal is complete, Phuket International Airport’s passenger capacity will increase to 12.5 million passengers per year.The AOT board will meet on the 29th April when they will make a formal public announcement about the project.Rebecca Smith Phuket Ocean VillasPhuket Ocean Villas specialise in luxury ocean view property in Phuket, Thailand. We have a superb and extensive portfolio of luxury property in Phuket, available in breathtaking locations throughout the island, including new property, resale property and land.149/12 Srisoonthorn Road, Cherngtalay, Thalang, 83110, Phuket, Thailand

You can edit or delete your press release Phuket, Thailand: New terminal at Phuket International Airport starts in November here