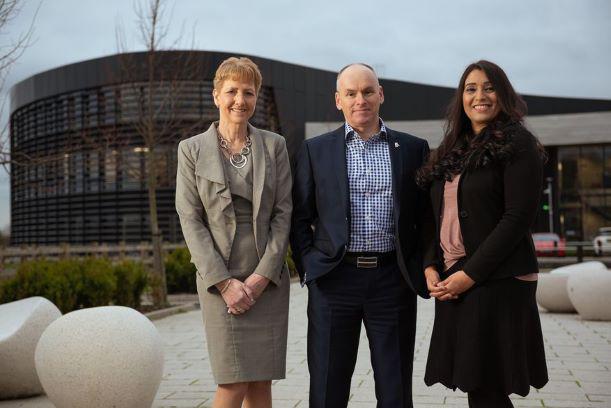 Just months after celebrating its second anniversary, occupancy levels at the £12m iHub innovation centre on Infinity Park have passed the 94% mark.Since it was launched in Autumn 2016, the 45,000 ft2 facility has gone from strength to strength, attracting some of the biggest names in the region’s automotive, rail and aerospace supply chain industries.Occupancy levels at the iHub have exceeded all expectations, with regional, national and global businesses taking advantage of the building’s strategic location on Infinity Park, the 100-acre manufacturing focused commercial and technology site.Tenants now include global aerospace giant Airbus; Altran, a world leader in engineering and R&D services; Composite Braiding, which specialises in thermoplastic composite braiding and VRCO, an advanced aviation company, which is hitting the headlines across the globe with the development of the world’s first British-made flying cars.In February, the University of Sheffield Advanced Manufacturing Research Centres (AMRC), one of the world’s leading manufacturing research institutions, is to set up home at the iHub while a new multi-million pound 50,000 ft2 innovation facility is being developed on Infinity Park.iHub, which has Enterprise Zone status, is the centre piece of Infinity Park, the new 100-acre manufacturing focused commercial and technology site, between Sinfin and Chellaston, to the south of the city.It is strategically located close to the world headquarters of Rolls-Royce Civil Aerospace and within 15 minutes of OEMs including Bombardier, Toyota and JCB, with direct links to the A50 and M1. The iHub provides high quality, flexible workspace for start-ups, early stage businesses and high growth SME’s looking to expand their role within the transport engineering and hi-tech sectors.As well as offering 18 traditional office workspaces (from 127 ft2 to 970 ft2), the iHub provides 14 ground floor workshops for businesses seeking a more hybrid working environment. The state-of-the art workshops range in size from 375 ft2 to 4,451 ft2 and cater for a broad range of uses in a managed workspace environment.One of the unique facilities available at the iHub is the innovative ‘iLab’, which promotes invention by enabling the rapid prototyping of a range of products and services. It also boasts high end virtual reality, 3D printing and surface microscope equipment.The iHub also offers a multi-purpose ‘heart space’ area, which is establishing itself as a popular venue for conferences and events, along with meeting and seminar rooms. Speaking about the success of the iHub since its launch two years ago, Councillor Matthew Holmes, deputy leader of Derby City Council and cabinet member for planning, environment and regeneration, said:“The iHub is continuing to build on Derby’s reputation for developing and creating cutting-edge technologies, particularly in the aerospace, automotive and transport industries. It reinforces Derby’s reputation as the UK ‘capital for innovation.“To achieve 94% occupancy in the current economic climate is a fantastic achievement and reflects the high-quality accommodation and range of support services that is available at the iHub.”Alan Smith, head of economic growth at Derby City Council, added:“This demonstrates to the Council that there is strong demand for the quality of workspace and facilities and partnerships available at the iHub. Our original business plan forecast for this building has been validated. We hope that the way this building has let will give confidence to others and that the iHub becomes the centre-piece to a successful Infinity Park for years to come.” Ann Bhatti, head of Connect Derby, said:“We’re absolutely delighted with the positive reaction that the iHub has received since it joined the Connect Derby portfolio of buildings in 2017.“Much of the credit for the iHub’s success must go to Alan Smith; he took a lead role in developing the funding bid for the building, project managed the design and build team and worked collaboratively with Connect Derby in developing and supporting the operational processes. His advice has been instrumental in supporting the on-going development of the iHub.”The iHub builds on the success of the hugely popular Connect Derby scheme, which has created a strong market for mixed use and sector specific serviced offices across the city at its six other buildings – Friar Gate Studios, Marble Hall, Riverside Chambers, Sadler Bridge Studios, Kings Chambers and Shot Tower.The iHub has received funding from the Regional Growth Fund and European Regional Development Fund (ERDF), as well as Derby City Council and the University of Derby.For further information about taking space at the iHub, contact Ros Stacey on 01332 01332 742800 or email ros.stacey@derby.gov.ukABOUT IHUB iHub is the centre piece of Infinity Park, the new 100-acre manufacturing focused commercial and technology site, between Sinfin and Chellaston, to the south of Derby.BH PR & Communications 6 Pride Point Drive Derby DE24 8BX

02-27-2019 | Business, Economy, Finances, B …
iHUB
Promach 3D Follows Recent Expansion With Move To The iHub Innovation Centre
Derby-based precision engineering company Promach 3D is the latest manufacturing company to establish a base at Derby’s £12m iHub innovation centre on Infinity Park. Established in 2004, Promach 3D specialises in the manufacture of both conventional and complex components for use in the aerospace, rail and motorsport industries. The business prides itself on its ability to react quickly to customer requirements to the highest quality standards, which has earned it an

06-19-2020 | Media & Telecommunications
CONNECT DERBY
Derby video production company launches remote video service
Derby-based video production and animation company Future Proof Films has launched an innovative new remote filming service which enables it to deliver professional quality video despite the current lockdown. The company, which is based at Connect Derby’s Sadler Bridge Studios, has launched its ‘Pro Remote Video’ service for those businesses that still need professional video content to support their marketing effort. The idea is simple – the team at Future Proof
06-09-2020 | Logistics & Transport
Market Insights Reports
Electric Bikes Market 2020 Analysis by Top Manufacturers - Accell Group N.V., KT …
The Electric Bikes Market report is a valuable source of insightful data for business strategists. It provides the industry overview with growth analysis and historical & futuristic cost, revenue, demand, and supply data (as applicable). The research analysts provide an elaborate description of the value chain and its distributor analysis. This Market study provides comprehensive data that enhances the understanding, scope, and application of this report. Get Free Sample Copy
05-03-2017 | Leisure, Entertainment, Miscel …
IMAGE UNLIMITED COMMUNICATIONS
Kentucky Derby Celebration on the Water
On Saturday, May 6th, 2017 from 2:00PM to 9:00PM, Pier 6 in Charlestown, MA, invites guests to don their finest derby attire and join them on the outdoor patio for its Maker’s Mark Kentucky Derby Party. For just $20-$35 per person, derby enthusiasts gain entry to the party where they’ll enjoy Southern-inspired light appetizers, derby-inspired specialty cocktails like the Maker Mark Mint julep, and a complimentary photo booth all evening
04-04-2017 | Business, Economy, Finances, B …
Workplatform Ltd
More Access for Total Hire, Derby
UK based rental company Total Hire has purchased a number of Genie scissor and booms lifts, including 19ft, 26ft and 32ft slab electric scissors and 45ft diesel and bi-energy Z45/25 articulated boom lifts from UK Genie dealer, Workplatform. The company was established in 1999 and now offers a wide range of equipment from seven locations, four in the Derby area and the others in nearby Huthwaite, Ripley and Somercotes. Its product
04-06-2011 | Business, Economy, Finances, B …
Peak Workforce
Derby Recruitment Company Warns Of Default Retirement Age Abolition Pitfalls
Peak Workforce, a recruiter with its own mature workforce initiative, speaks out about Default Retirement Age (DRA) abolition regulations that could see local employers fall foul of the law. Although scheduled for abolition in October 2011, new guidelines set out by the Government and ACAS could leave local employers confused and even acting unlawfully if not adhered to. Although previous guidance issued by ACAS was that the last date
10-17-2008 | Industry, Real Estate & Constr …
Portakabin
Portakabin Provides Modular Building Solution for Derby Council
Portakabin, the UK’s leading modular building supplier, has provided Derby City Council with three new Children’s Centres, as part of phase two of the Government’s Sure Start Children’s Centre initiative. Having used traditional buildings to complete phase one of the project, the Council opted for the reassurance of a timely delivery of a modular building solution for phase two, citing minimal on-site disruption as another key reason for the switch to
Comments about openPR
We publish our press releases on openPR.de because we like people who are "open" - just like us.
Frank Obels, CEO, INCONET - Informationssysteme, Communication und Netzwerkberatung GmbH