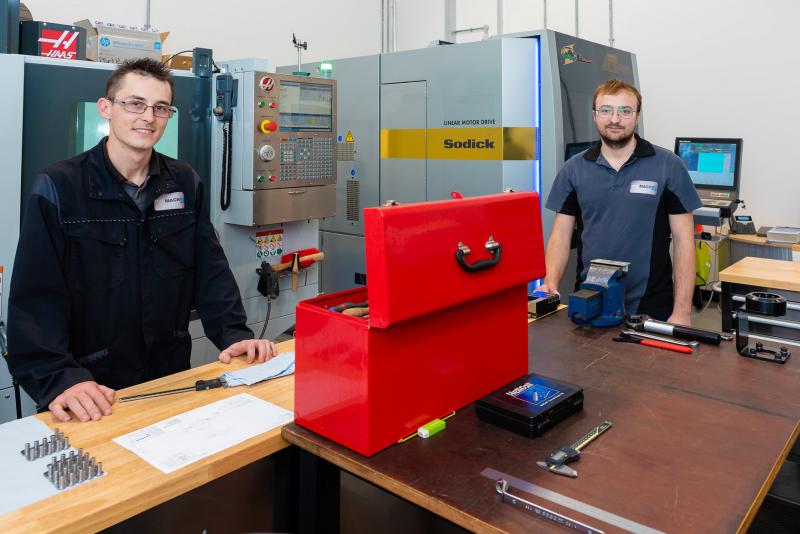 Derby-based precision engineering company Promach 3D is the latest manufacturing company to establish a base at Derby’s £12m iHub innovation centre on Infinity Park.Established in 2004, Promach 3D specialises in the manufacture of both conventional and complex components for use in the aerospace, rail and motorsport industries. The business prides itself on its ability to react quickly to customer requirements to the highest quality standards, which has earned it an unrivalled reputation within the elite precision industries.The company, which expanded its workforce in 2017 due to increasing demands on its capacity, has taken on an additional unit located in the iHub.The high-quality accommodation, easily accessible location and facilities on offer at the iHub will allow Promach 3D to expand its footprint in Derby even further and continue to grow in the engineering sector.Since it was launched in 2016, the £12m iHub, which has Enterprise Zone status, has attracted a diverse range of businesses to its 18 offices and 14 ground floor workshops.Occupancy levels at the iHub have now reached 94%, with local, regional and national companies taking advantage of the building’s strategic location on Infinity Park.High profile clients include such as global aerospace giant Airbus; Altran, a world leader in engineering and R&D services; and Composite Braiding, specialists in thermoplastic composite braiding and VRCO, an advanced aviation company, which is hitting the headlines across the globe with the development of the world’s first British-made flying cars.Nuclear AMRC Midlands, a new research and innovation centre to support manufacturers across the region, recently set up a base at the iHub. The new centre is a major expansion of the Nuclear Advanced Manufacturing Research Centre, part of the UK’s High Value Manufacturing Catapult.Commenting on the move to the iHub, John Burke, commercial manager at Promach 3D, said:In order to meet the demands on our business and to increase our manufacturing capacity, we felt it necessary to expand to a location like the iHub. We have our headquarters on Victory Park, which is our principal site, and the additional facility at the iHub is set to support it.” "We are delighted to be at the iHub. It gives us a great platform to train new staff and expand our customer base. We also have a training programme in place to bring through young engineers."Being at the heart of a manufacturing district is really key to our business as it allows us to be accessible and responsive to our customers’ needs.”Ann Bhatti, head of Connect Derby, added:“We’re delighted to welcome John and his team to the iHub. Since it was launched, the iHub has established a reputation for providing a supportive and collaborative environment to enable businesses to innovate and grow.“We look forward to supporting John and the Promach 3D team as they continue their impressive growth.”The iHub builds on the success of the popular Connect Derby scheme, which has created a strong market for mixed use and sector specific serviced offices across the city at its six other buildings across the city – Friar Gate Studios, Marble Hall, Riverside Chambers, Sadler Bridge Studios, Kings Chambers and Shot Tower.The building scooped the Design Excellence Award at Insider's East Midlands Property Dinner 2017 and was named best commercial development at the Royal Institution of Chartered Surveyors (RICS) Awards 2017, East Midlands.The development has received funding from the Regional Growth Fund and European Regional Development Fund (ERDF), as well as Derby City Council and University of Derby.The exciting new iHub Derby is the centre-piece of Infinity Park, a new manufacturing focused innovation and technology park, which has Enterprise Zone status.The iHub provides flexible workspace for start-ups, early stage businesses and established high growth SMEs hoping to establish themselves, or expand their role in the aerospace, rail and automotive supply chains.BHPR and Communications 6 Pride Point Drive Pride Park Derby DE24 8BXstephkirk@bhprcomms.co.uk 01332203311 Stephanie Kirk

01-25-2019 | Business, Economy, Finances, B …
iHUB
Flagship iHUB innovation centre passes 94% occupancy
Just months after celebrating its second anniversary, occupancy levels at the £12m iHub innovation centre on Infinity Park have passed the 94% mark. Since it was launched in Autumn 2016, the 45,000 ft2 facility has gone from strength to strength, attracting some of the biggest names in the region’s automotive, rail and aerospace supply chain industries. Occupancy levels at the iHub have exceeded all expectations, with regional, national and global businesses taking

03-17-2020 | Business, Economy, Finances, B …
Stretch Wrapper Market
Stretch Wrapper Market Research 2020-26, Signode Industrial Group, Webster Griff …
The latest study on the Global Stretch Wrapper market report represents a deep appraisal of the international industry. The research report on the worldwide Stretch Wrapper market 2020-2026 sheds light on qualitative as well as quantitative insights, historical Stretch Wrapper industry status and authorized projection related to the Stretch Wrapper market size. Each and every segment exhibited in this report are discovered through verifiable research methods and techniques. It also
05-23-2019 | Advertising, Media Consulting, …
MRRSE
Why Bagging Equipment Market (2018-2028) are Booming So Rapidly? || Key Players …
The expanding database of Market Research Reports Search Engine (MRRSE) has been recently updated by the addition of a new study which is titled as “Bagging Equipment Market Assessment Covering Growth Factors and Upcoming Trends till 2028 End”. The fact-based research report on the global Bagging Equipment market covers various aspects such as trends, drivers, challenges and opportunities that have an influence on the growth and expansion of the global
04-10-2019 | Industry, Real Estate & Constr …
QY Research, Inc.
Labeling Machinery Market Share, Trends and Leading Players By 2025| Barry-Wehmi …
Labeling Machinery is used to label end-products mainly for brand identification. Appropriate labeling aids in delivering product information to customers and helps manufacturers in tracking products. The Asia-Pacific region Labeling Equipment market is projected to grow at the highest CAGR during the forecast period. The global Labeling Machinery market was xx million US$ in 2018 and is expected to xx million US$ by the end of 2025, growing at a CAGR of
02-27-2019 | Advertising, Media Consulting, …
Market Research Report Store
Automatic Overwrapping Machine Market Size, Share, Development by 2024– Top Ke …
Market Research Report Store offers a latest published report on Automatic Overwrapping Machine Market Analysis and Forecast 2019-2025 delivering key insights and providing a competitive advantage to clients through a detailed report. The report contains 91 pages which highly exhibit on current market analysis scenario, upcoming as well as future opportunities, revenue growth, pricing and profitability. Click to view the full report TOC, figure and tables: https://www.marketresearchreportstore.com/reports/295369/global-automatic-overwrapping-machine-market The global Automatic Overwrapping Machine market
02-08-2019 | Business, Economy, Finances, B …
MRRSE
Packaging Machinery Market ||Key Players- Omori Machinery Co. Ltd., ProMach, Her …
Looking at the current market trends as well as the promising demand status of the “Packaging Machinery Market” market, it can be projected that the future years will bring out positive outcomes. This research report added by MRRSE on its online portal delivers clear insight about the changing tendencies across the global market. Readers can gather prime facets connected to the target market which includes product, end-use and application; assisting
01-24-2019 | Business, Economy, Finances, B …
Market Research Hub
Global Box and Carton Overwrapping Machines Market 2019| ULMA Packaging, Marden …
The global market status for Box and Carton Overwrapping Machines is precisely examined through a smart research report added to the broad database managed by Market Research Hub (MRH). This study is titled “Global Box and Carton Overwrapping Machines Market” Insights, Forecast to 2025, which tends to deliver in-depth knowledge associated to the Box and Carton Overwrapping Machines market for the present and forecasted period until 2025. Furthermore, the report
Comments about openPR
I can't but agree to the positive statements about your portal: easy to use, clear layout, very good search function, and quick editing!
Jens O'Brien, Borgmeier Media Communication