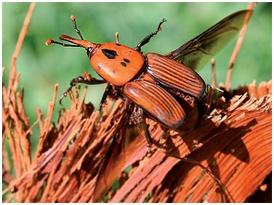 Without The Use Of Chemicals: Agents Made From Soy And Coconut Oil Willich – Pest alarm in the Middle East and in almost all Mediterranean countries: A bug brought in from Southeast Asia has almost unnoticed settled down in the tall palm trees and has already destroyed whole groves and promenades. Not just the tourist industry is threatened with immense economic damage. The insects could be pushed back, but not eliminated with chemicals. The German-based company, Innoway, successfully fights the so-called Red Palm Weevil with ecologically compatible agents made from soy and coconut oil. The substances contained therein dissolve the exoskeleton of the insects and block their respiratory tracts. The main focus of the treatment is prevention; once the palm tree is infested, only its life span can be extended. The Red Palm Weevils originally stem from the tropical areas of Southeast Asia. In 1985, the first specimens appeared in the Arabian Gulf States, where they in particular prefer to set about Date Palm plantations. Subsequently, the vermin struck Northern Africa and the Mediterranean. The bug can smell the palm trees from a large distance. By using appropriate scents it is possible to deceive their sensory organs and deter the intruder from landing. The Innoway-product (Secuvital Repellent) utilizes a special combination of essential oils for this purpose. With commercially available spray systems the crown of the palm tree is fogged with the active agents. The procedure should be repeated every two weeks. In doing so, it is advisable to mix the scent with the biological pesticide by Innoway (Secuvital InsectStop) and to bring them out together in one step. This is the only way to be sure, because from the outside the infestation is almost unnoticeable. By the time the signs of an infestation become apparent in dead palm leaves, it is often already too late. The bug itself does not cause direct damage to the plants; it is caused by its larvae, which hatch from eggs directly deposited in the palm’s crown. Unnoticed inside the trunk, these eat their way to the middle and in the process destroy the pathways via which the plant provides itself with nutrients. Compared to other biological pesticides, Secuvital has the advantage that is not directed against the nervous system of the animals, since it is know that the insects are able to adjust and with time become resistant. The Innoway-agent does not use toxic substances, the action is purely physical. This means that certain bodily and organ functions are disabled: The oils contain natural substances (e.g. caprylic acid), which dissolve the exoskeleton of the insects and block their respiratory tracts. Additionally, the use of Innoway-pesticide has another effect: The animals lose water and dry out. If palm trees are already infested, the Innoway-agent can often not save the plant itself anymore, but keep the vermin from reproducing and spreading. The agent is injected into the tree trunk, flooding the eating passages in which the larvae are housed and the vermin is thus killed off. It is also helpful to already treat the young palm tree seedlings when bedding them out. In this case it is advisable to mix Innoway-Secutvial InsectStop into the soil, because egg nests of the bugs can also be found in the ground and hatched larvae can attack the roots of the palm tree. The biological method of Innoway also has advantages during the disposal of infested palm trees, in case they have to be felled after all. Burning them on site has not proven to be the safest method: Because the fresh wood is still moist, some eggs and larvae survive. Therefore the waste is often buried. After treating it with chemicals it could fall under the special regulations of hazardous waste, which could significantly increase the cost for disposal. By comparison, Innoway produces its counteragent from non-toxic substances which are approved as food or food additives, in this case soy and coconut oils. Of course, Innoway’s biological agents used to combat the Red Palm Weevil are also usable against other agricultural pest: With grain e.g. the Sawtoothed Grain Beetle and the Corn Weevil, elsewhere the Potato Beetle, which cause huge crop shortfalls. In nurseries, there are almost always problems with thrips on thin-leaved plant like e.g. the passion flower. Also in these cases the biological agents by Innoway are effective without environmental burden.About InnowayInnoway is an internationally operating marketing firm. Its topics range from biological fertilizers and pest control to water treatment and water catchment to the use of renewable energies. The company was only founded in 2008, but uses products which have partly proven themselves for years and a now being adjusted and improved for the special fields of application.Innoway GmbH Karl-Arnold-Str.4 47877 Willichwww.innoway.eu/presse Mail: presse@innoway.eu Phone: +49 (0) 2154 484 38 20

12-17-2010 | Business, Economy, Finances, B …
Innoway
Innoway now also in South Africa
New bases in Durban and near Cape Town Durban/Cape Town – Innoway recognizes great potential in the African market. New in the network is now South Africa, where a new base has been set up in Durban. Innoway connects new product ideas with the world market and in this uses its connections as an internationally operating enterprise. Manufacturers, who do not have their own distribution channels, receive access to clients
10-28-2010 | Energy & Environment
Innoway
Significantly Less Traffic Accidents Through Intelligent Paint
First Application in Renovated Tunnel in South Tyrol Ortisei/Willich - Paint does not equal paint. The German company, Innoway GmbH, currently makes use of an intelligent high-tech-paint, which does not just look good, but also adds to reducing the accident rate in tunnels. The applied material increases the light in the tube and, thorough a self-cleaning-effect, also ensures that it stays like that for many years. The
10-28-2010 | Energy & Environment
Innoway
Improved Hygiene in Hospitals via Biological Cleaning
Nature Helps in Germ Elimination and Disinfection Willich – There is a pressing need to improve the hygiene in hospitals worldwide. All experts are in agreement thereon, given current events. The question is only: How? The tight financial situation of clinics and medical institutions makes a higher cleaning frequency and the related cost-intensive personnel expenditures more difficult. The German company Innoway GmbH thus focuses on a combination of two