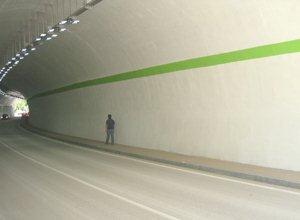 First Application in Renovated Tunnel in South Tyrol Ortisei/Willich - Paint does not equal paint. The German company, Innoway GmbH, currently makes use of an intelligent high-tech-paint, which does not just look good, but also adds to reducing the accident rate in tunnels. The applied material increases the light in the tube and, thorough a self-cleaning-effect, also ensures that it stays like that for many years. The first application in a large-scale project in traffic infrastructure took place in the tunnel at Ortisei in the Italian South Tyrol, which, after months of renovation, was reopened. Accident studies have revealed that the accident risk tremendously increases especially at the entrances and exits of tunnels – thus at the transition from artificial light to daylight. Therefore, the regulations for safety features have been significantly enhanced throughout the EU in recent years.This has led to enormous costs for the operators though. Not just in Italy, where there is a combined tunnel length of 1160 km, measures have come into focus, which save cost but nevertheless help increase traffic safety. HiTecCo by Innoway is an acrylic paint, which, in its final coat, is refined with a layer of titanium dioxide. Through this surface finishing the treated surfaces receive a perfectly smooth structure, to which dust, fats and exhaust fumes are unable to attach. Even more important though is the anti-microbial effect. A kind of dirt-catalyst is created. But not only ceilings and walls are cleaned, also the air filled with exhaust fumes. A figure illustrates the effect: About 100 square meters of refined (treated) tunnel area is sufficient to significantly improve 25,000 cubic meters of air per day. Necessary prerequisite for this though is the influence of UV-light, without which the physical self-cleaning process would not be initiated. Originally, direct solar radiation was necessary for this. Innoway, together with its industrial partners, has in the meantime improved the procedure so far that the light emitted by lamps and other illuminants is sufficient. Subsequently, the agent, also used in semiconductor technology, unfolds its photo catalytic characteristics: Because of the radicalized surface organic pollutants, like e.g. mold and fungi, are decomposed and turned into harmless residues like e.g. carbon dioxide and water. The HiTecCo-paint used by Innoway is able to reflect about 80 percent of incident light. If also the road surface is treated with the surface finishing, the asphalt does not absorb as much light. Thus lighting fixtures with significantly lower output can be used without decreasing the brightness. This way, conventional lamps save about 40 percent, modern LED-lamps even up to 70 percent in energy. Innoway estimates that the operator can reduce the yearly management and maintenance costs for the tunnel by about 35 percent. For example, in a tunnel of medium length the tube would have to be completely cleaned and the walls repainted every six months. Otherwise the lighting conditions would be so strongly affected by dirt particles and exhaust fumes that the accident risk would significantly increase.About InnowayInnoway is an internationally operating marketing firm. Its topics range from biological fertilizers and pest control to water treatment and water catchment to the use of renewable energies. The company was only founded in 2008, but uses products which have partly proven themselves for years and a now being adjusted and improved for the special fields of application.Innoway GmbH Karl-Arnold-Strasse 4 47877 Willich GERMANY www.innoway.eu/pressePress Contact Mail: presse@innoway.eu Phone: +49 (0) 2154 484 38 20 begin_of_the_skype_highlighting              +49 (0) 2154 484 38 20      end_of_the_skype_highlighting

12-17-2010 | Business, Economy, Finances, B …
Innoway
Innoway now also in South Africa
New bases in Durban and near Cape Town Durban/Cape Town – Innoway recognizes great potential in the African market. New in the network is now South Africa, where a new base has been set up in Durban. Innoway connects new product ideas with the world market and in this uses its connections as an internationally operating enterprise. Manufacturers, who do not have their own distribution channels, receive access to clients
11-19-2010 | Business, Economy, Finances, B …
Innoway
Help For Palm Trees Against Voracious Bug Infestation
Without The Use Of Chemicals: Agents Made From Soy And Coconut Oil Willich – Pest alarm in the Middle East and in almost all Mediterranean countries: A bug brought in from Southeast Asia has almost unnoticed settled down in the tall palm trees and has already destroyed whole groves and promenades. Not just the tourist industry is threatened with immense economic damage. The insects could be pushed back, but not
10-28-2010 | Energy & Environment
Innoway
Improved Hygiene in Hospitals via Biological Cleaning
Nature Helps in Germ Elimination and Disinfection Willich – There is a pressing need to improve the hygiene in hospitals worldwide. All experts are in agreement thereon, given current events. The question is only: How? The tight financial situation of clinics and medical institutions makes a higher cleaning frequency and the related cost-intensive personnel expenditures more difficult. The German company Innoway GmbH thus focuses on a combination of two